Utah State University veterinary medicine student, David Payne, and four of his veterinary colleagues, stepped into the room where their client and his sickly cat were waiting. After talking to the client the group was informed the cat spent most of its time outdoors and hadn’t been seen by a veterinarian in about four years.

These facts they gained from the client paired with some of the cat’s symptoms, led the group to wonder if the cat was suffering from Feline Immunodeficiency Virus, commonly known as FIV. The virus is one that weakens the immune system while also hindering a cat’s ability to protect itself from other infections.

Once at WSU, USU students were divided into groups and given their cases. The challenge began the following day with a client interview.

“We had a foal who was nine-months-old that was losing weight and had a little bit of diarrhea,” said USU student Hayley Ball. “The foal had a bunch of red herrings like a heart murmur and he couldn’t breathe sometimes. We went through several rounds of diagnostics.”

After students received their cases and conducted their first client interview, they proceeded as a real clinician would by running tests and physical exams on their animals to find a correct diagnosis. This is where the help of a facilitator, a USU or WSU professor, came in. Since the animals used in the cases were stuffed animals, the facilitators told students what they would have felt or seen while examining the animal. This helped students practice conducting a physical exam while still understanding the signs and symptoms a real animal would have had.

“My case was a dog, “ said USU student Chiara Velotta. “The dog was presented to us with coughing and lethargy. After the first day we still had no idea what was going on with him.”

When all of the needed information was gathered from the client and exams, the students started researching to find out what the problem could be.

“We researched a lot in that first day,” Payne said. “We had some ideas of what we were going to do and what we wanted to do, and then by the third morning we really started to narrow it down.”

The challenge was ongoing and the students filled their time with client appointments, facilitator meetings, lab submissions and researching until, as Payne said, the diagnosis was narrowed down and the group were certain of the problem. With the guidance of a facilitator, each group correctly diagnosed their animals.

“It’s great to see students’ thinking processes advancing and growing,” said facilitator and USU veterinary medicine professor Chris Davies. “It’s so exciting to see them putting the pieces together. The process helps students apply the knowledge they’ve been gaining and to put the coursework they’re still taking into perspective. It also helps them see how they would use their skills in a future clinical setting.”

The challenge provides students the experience of working in a clinical situation with a team, filling out the appropriate forms and client communications, Davies added.

For Payne, gaining an understanding of those “other talents” was helpful.

“[The best part was] discovering for myself some of my deficits in talking to a client, so it was kind of nice to be introduced to that,” Payne said.

“A major part of a veterinarian’s job is being able to communicate effectively what’s going on with the pet,” she said. “Most people don’t have a whole lot of medical background and don’t understand the medical jargon and words that get thrown around by a lot of vets, so being able to bring it down to a level that a normal person could understand is part of our job.” 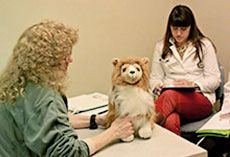 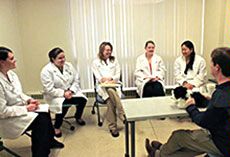 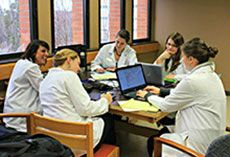