Famed South Pole explorer Roald Amundsen asserted that good luck was actually good planning.
“Victory awaits him who has everything in order,” Amundsen wrote. “Defeat is certain for him who has neglected to take the necessary precautions in time; this is called bad luck.”
Utah State University physicists Mike Taylor and Dominique Pautet can attest to Amundsen’s tried-and-true wisdom after completing a research trip to the National Science Foundation-run Amundsen-Scott South Pole Station that bears the name of the first person to reach 90 degrees South, along with rival explorer Robert Falcon Scott. Like Amundsen’s chain of sled dog-supplied depots that led to his successful expedition, today’s Antarctic research efforts are based on a bucket brigade-type lifeline that supports year-round habitation of the bitterly cold, often inaccessible study sites.
“The whole operation — from a staging base in Christchurch, New Zealand to the research stations at McMurdo (on the Antarctic coast) and the South Pole — is like a well-oiled machine,” says Taylor, professor in USU’s Department of Physics. “It’s a matter of survival. There’s a great spirit of camaraderie among the military, scientific and civilian personnel involved in the program and the system operates with great efficiency.”
Taylor and Pautet, a postdoctoral fellow in physics, traveled to the Geographic South Pole Jan. 15 on a two-week trip to install a research creation that’s been more than a decade in the making. With a 2006 NSF grant, Taylor and colleagues designed the Advanced Mesospheric Temperature Mapper — AMTM — to capture images of gravity waves some 50 miles above the polar surface.
“Mesospheric waves break like ocean waves and deposit energy into the Earth’s atmosphere,” Taylor says. “We think these waves are associated with major weather disturbances.”
The AMTM, a cylindrical camera built by USU’s Space Dynamics Laboratory, measures about two meters in length and weighs about 150 lbs. Mounted on a metal rail constructed by research station carpenters, the camera pokes through a round hole, covered with a clear, glass dome, in the station’s roof. Nitrogen gas is pumped into the sealed dome to prevent frost from obscuring the lens’ view.
Among the questions Taylor, Pautet and their colleagues will explore: Is the Aurora Australis — known as the Southern Lights — causing the waves at high latitudes?
“Waves have been observed around the Antarctic coast but it isn’t clear if such waves exist above the South Pole, where a polar vortex — a persistent, large-scale cyclone — produces very clear, stable air,” Taylor says. “Our goal is to make measurements in this very remote region.”
He and Pautet are confident they’ve left the AMTM in good hands. USU physics alums John Maloney ’87, MS’97 and Flint Hamblin ’07, employees of Raytheon Corporation and year-round South Pole residents, will keep an eye on the camera. Maloney will be the principal camera operator, while Hamblin will handle cryogenic aspects of other delicate astronomical instruments. Data collected from the AMTM will be transmitted to USU via satellite.
“We’ll be looking at data to try and determine where the waves come from and how they propagate, what their characteristics are and which way they’re moving,” Taylor says. “We’re excited to get our first data in late April, which is the start of the winter season in Antarctica.”
Like initial exploration of the South Pole and current trips, the research mission is a gamble. The visit itself, say Taylor and Pautet, was akin to space travel. At Christchurch, each traveler received a detailed safety briefing before being outfitted with winter gear befitting an astronaut. For their 2,000-mile trip to Antarctica, the passengers boarded a massive C-17 military transport plane equipped with skis — not conventional landing gear — for an ice sheet landing.
“From McMurdo, it took us another three hours to fly inland — on a smaller C-130 ‘Hercules’ plane — to the South Pole station,” Pautet says. “Once you’re there, it’s like being on a space station.”
The two-level, 65,000-square-foot station is elevated on hydraulic columns that float upon a moving glacier. Insulated to five times the value of an average U.S. residence, the structure features a NASA plant growth chamber to supply fresh produce and accommodates about 150 residents during the three-month austral summer; 50 people during the remaining nine months.
“It’s an engineering marvel that’s enabling groundbreaking scientific research ranging from cosmic observations to seismic and atmospheric studies,” Taylor says. “We hope to contribute to this exciting, growing body of knowledge.”
Related links:
Amundsen-Scott South Pole Station
USU Department of Physics
USU College of Science
Contact: Mike Taylor, 435-797-3919, mike.taylor@usu.edu
Writer: Mary-Ann Muffoletto, 435-797-3517, maryann.muffoletto@usu.edu 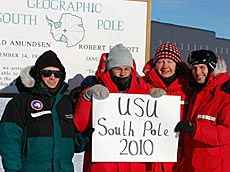 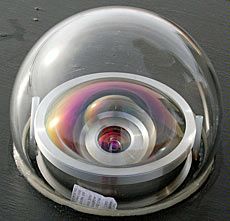 The lens of USU's AMTM camera pokes through a round hole, covered with a clear, glass dome, in the Amundsen-Scott South Pole Station’s roof. Nitrogen gas is pumped through tubes into the sealed dome to prevent frost from obscuring the lens’ view.