Washington view: Life of the Intern in the DC office of the SL Tribune

WASHINGTON, D.C. — I find myself sitting in an outdated newsroom, surrounded by colorful personalities and less colorful wall décor, at the National Press Building in the heart of Washington.

As an (unpaid) intern with The Salt Lake Tribune covering politics, I’m primarily responsible for producing a weekday news digest, ideal for busy people who don’t have the time to sort through all of the junk themselves. I do the sorting, they do the clicking and, I hope, the reading. I also write occasional stories about Utah politics.

I spend the day perusing Twitter, Google news feeds and dozens of individual media sites in search of the most interesting and relevant news for our audience. A lot of what I do could be done remotely. In fact, I’ve worked from my Arlington-based apartment on several occasions, Hurricane Sandy’s visit among them. When I first heard what my job entailed, I wasn’t sure why I was sent all the way out to D.C. when I could do the same job in Utah (or anywhere else, for that matter).

However, that’s where I was wrong — I couldn’t do the same job anywhere else. It’s in this aesthetic wreck of an office that I’ve had my best learning experiences.

First of all, you learn that the newsroom is far from glamorous, and that professional reporters are as unprofessional (and by this, I simply mean normal) as the rest of us.

My desk is adjacent to that of Christine Tierney, a Detroit News auto/politics writer with a pecan-loving pet squirrel and an affinity for Mrs. Vickie’s Sea Salt and Vinegar chips. Caddy-corner to me sits a Norwegian student named Tiril, a more recent addition to the office, and the only other person in the newsroom — apart from myself — who isn’t old enough to rent a car. She works for Christine, who could be heard this morning saying: “See this paper? It’s important. I’ll need it later. Let’s keep it on your desk so I have hopes of finding it when that time comes.”

Just as she says this, the 19-year-old Norwegian guy who works in an office around the corner strolls past our open door, subtly fixating his eyes on the young woman who shares his European heritage. He’s done this three times today. Tiril hasn’t the slightest idea. I’m too afraid to mispronounce her name in an attempt to get her attention, so I dismiss it as a trivial tidbit and get back to work.

At some point in the day, and only sometimes, David “Shep” Sheperdson, also of The Detroit News, will burst into the room, an arrival that has the potential to be particularly startling if it weren’t for his foreboding physics-defying bravado of a voice.

He’ll sit down at a desk that could understandably be mistaken for a war zone and start making phone calls, most of which end with something along the lines of: “S-s-sorry, my phone is a piece. . . .C-c-can you repeat that one last thing?” It’s clear Shep is great at what he does. It’s less clear how he remembers to put pants on every morning.

Then there’s Karl, who has his own office within the office. For the rest of us, it’s an open work zone. So for this reason, Karl reeks of anonymity. Someone mentioned that he was a legend once, but I can’t remember who said it and I’m actually not positive we were talking about the same guy. Thus, Karl remains rarely-seen and mysterious.

And in the northeast corner of the room sit two of the reasons I’m here: my mentors Tommy Burr and Matt Canham, two Salt Lake Tribune political reporters (and fro-yo enthusiasts). I love listening to their conversations, which range from the analysis of a morning phone call with Utah Rep. Jason Chaffetz to the discussion of a recent legislative act and how it will impact Utahns. They bounce story ideas back and forth, even occasionally asking me for Mormon insight.

This invaluable discourse (often including the other writers in the room) has allowed me to see firsthand how professional reporters think, work, interview and write.

It’s been a quiet day today. Shep must be working from home.

—Betsy Blanchard is a JCOM junior from St. Peters, Missouri. 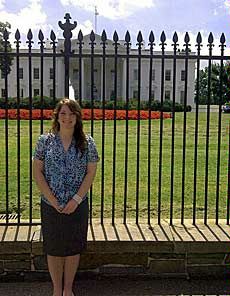 Betsy Blanchard, cub reporter, in front of a neighbor's house, just a block or two from her Salt Lake Tribune office.

The Salt Lake Tribune DC office, on the 9th floor.