Not everyone is lucky enough to have a tarantula for a lab partner, says Utah State University student researcher Clay Gunnell.

“She’s always on time, never hogs the lab bench and doesn’t text incessantly,” says the biology major who was recently named the Peak Prize Undergraduate Researcher of the Year for USU’s College of Science.

Gunnell is among a number of budding scientists at USU who are delving into complex questions, undertaking hands-on research alongside faculty mentors and gaining experience once reserved for seasoned professionals well beyond the undergrad level.

The aspiring dentist is investigating speciation with faculty mentor James Pitts, assistant professor in USU’s Department of Biology. The team ventured to California’s southern coastal ranges to collect tarantulas from the Central Valley, west of the Sierra Nevada mountains, and from a desert area of the range’s eastern slope.

“It was thought that four different species of the Aphonopelma genus existed in the southern coastal ranges,” says Gunnell, who graduated from Utah’s Mountain Crest High School in 2004. “We extracted DNA from the spiders we collected, had it tested and identified only one species.”

The explanation could be inadequate classification techniques used to identify these species in the past.

“Before DNA testing, scientists relied more on describing the morphological features of each spider to determine its species,” he says. “Tarantulas of the same species vary in appearance — just like you and I look different. But we’re still the same species.”

“We’re studying antibacterial modes of action for a certain class of antibiotic compounds,” says Chan, whose research was funded by a USU Undergraduate Research and Creative Opportunities grant. “We know the antibiotics kill bacteria; the question is how they’re doing it.”

“The compounds may be disrupting the bacterial membrane and preventing cells from developing,” she says. “They could also inhibit electron transport, which starves cells of oxygen and nutrients.”

“We’re trying to stay ahead of dangerous bacteria that rapidly evolve resistance to known antibiotics,” says Chang, associate professor of organic chemistry. “We’re studying compounds modified from an existing antibiotic that may be safe and effective in battling such potentially dangerous infections as MRSA.”

“Carbon nanotubes provide a very strong and very lightweight material that NASA and other space agencies are investigating for use in satellites and many other applications,” says Call, who received an honorable mention from the Goldwater Foundation in 2010 and was recently named the College of Science’s Scholar of the Year.

“The nanotubes could be important in blocking light and allowing optical instruments to gather hard-to-obtain measurements in space,” Call says.

Yet another important feature of nanotubes is their electronic properties.

“Carbon nanotubes transport charge very well and that is very exciting to scientists,” Call says. “This property alone makes them applicable in all kinds of technology.”

Call, Chan and Gunnell are among are a group of undergraduates who will present at the March 29 Student Showcase during USU Research Week.

The College of Science’s ‘Geek Week’ is March 14-18. Also, see the announcement in Utah State Today with an overview of the week’s activities. 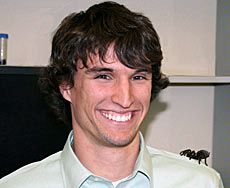 Clay Gunnell, College of Science Peak Prize Undergraduate Researcher of the Year, with his 'lab partner,' a tarantula from southern California’s coastal ranges. 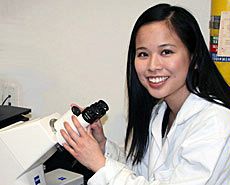