At first glance, Nevada’s Ash Meadows National Wildlife Refuge, with its austere alkaline desert uplands that border California’s Death Valley, hardly seems like an oasis of biodiversity. Yet it is.
“When most people think of areas of biodiversity, they think of the tropics,” says Utah State University biologist David Tanner. “And with many species, that’s true. But Ash Meadows harbors a surprising variety of fish, birds, plants, reptiles — and bees.”
North America’s arid Southwest, he says, is one of the world’s biodiversity hotspots for bees. And it’s in Ash Meadows, located about 90 miles northwest of Las Vegas, where Tanner, a postdoctoral fellow, and graduate students Catherine Clark and Nicole Boehme, discovered not one but two previously unknown members of the insect kingdom.
With funding from the U.S. Fish and Wildlife Service, the research team has made multiple trips to the 23,000-acre refuge to study the pollination biology of 12 species of rare desert plants endemic to the area. On a recent visit to collect samples of bees that visit the plants, Clark captured two curious specimens, which Tanner sent to Terry Griswold, adjunct assistant professor in USU’s Biology Department and research entomologist with the USDA-ARS Bee Biology and Systematics Laboratory, for identification.
Lo and behold, Griswold confirmed that the two were each distinct, yet unnamed species of the genus Perdita.
“It’s always exciting to discover a new species,” Tanner says.
The news is welcome, he notes, as worldwide bee diversity appears to be declining. Tanner’s doctoral dissertation, which he completed at University of California-Riverside, dealt with honeybee communication. Honeybees, he notes, are critical pollinators for food crops and the mysterious Colony Collapse Disorder that is ravishing these insects is a major concern.
“It’s doubtful that any other species could replace honeybees,” he says. “But it would be beneficial to have alternative, supplemental pollinators. Further study is needed to determine which species could serve in this role and that’s one reason why identification and conservation of all bees is important.”
Led by USU Department of Biology faculty member James Pitts, Tanner and his team have been studying pollination of such plants as the bushy annual Ash Meadows Blazingstar, the Ash Meadows Gumplant with its brilliant yellow flowers and Ash Meadows Lady’s Tresses orchid featuring tubular white flowers on a spiraling stem.
“We’re observing how bees behave around these flowers,” he says. “We record which parts of their bodies touch the flowers and how frequently they visit the flowers.”
During the field collection season, which stretches from early April to early September, the researchers visit Ash Meadows every other week and collect data and specimens from sun-up to sundown. The work is blisteringly hot but the visits afford opportunities to observe Ash Meadows’ unique spring-fed wetlands and Devil’s Hole, a flooded cave that’s home to the rare and endangered Devil’s Hole pupfish.
“One of our overall goals with the pollination study is to explore the evolution of the bees’ behavior,” Tanner says. “But finding new species is an exciting diversion — it makes you feel like a child again.”
Will Tanner and his team be involved in the naming of the new species?
“We’ll see — I hope to continue collaborating with Dr. Griswold’s lab on this and other projects,” he says.
Related links:
USU Department of Biology
USU College of Science
Contact: David Tanner, david.tanner@usu.edu
Writer: Mary-Ann Muffoletto, 435-797-3517, maryann.muffoletto@usu.edu 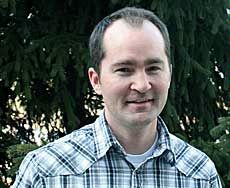 Biologist David Tanner says, with the decline in the worldwide honeybee population, it's important to identify and conserve bees that could serve as supplemental pollinators. 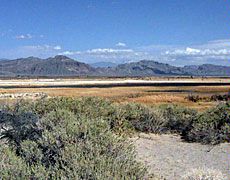