By: Kathryn Kemp in The Utah Statesman

Issue date: 2/7/07 Section: Features
As much as people love "happily ever after" endings, no couple or family is perfect, and every relationship takes work. Sometimes there are issues in a family or relationship that need some extra help. Marriage (or couples) and family counseling is available in order to provide that help.
"For many couples, they are too close to a very hurtful situation to be able to resolve it on their own," said Amy Kleiner, psychology resident and practicum coordinator at the USU Counseling Center. "In these instances, they could benefit from having an outsider help them make sense of why they repeat certain negative patterns and how they can break those patterns to find resolve in their relationship."
Couples counseling is one of the many services provided to USU students by the Counseling Center. The services are free for any student who is registered for six or more credits.
The Marriage and Family Therapy Clinic, also at USU, provides family therapy for individuals, couples and families both on campus and within the community. Their fees are based on a sliding fee scale for clients with a low socio-economic status. Under the direction of three faculty, students in the graduate program provide the therapy services for the clients.
According to Scot Allgood, associate professor and director of the marriage and family master's program, there is a difference between therapy and counseling.
"Counseling you tell people what to do, therapy you help them explore their options," he said. Also, traditionally, counseling works with the problem while in family therapy, it is not just the problem that is treated, but the entire situation.
"Family therapy treats the person in their context," he said. He said the counselors look at what is happening around that person in their family and other relationships in order to better understand the situation. One example, Allgood said, is a child acting out. They ask: Is it a behavior problem or is there more to it? Is it a parenting problem? Are the parents having their own problems and the child is acting out in response to that? When they look at the entire context like that, the therapist can see where to intervene.
Family therapy can diagnose and treat individuals, couples and families. There are a variety of reasons people attend therapy, from relationship to self-esteem to sexual problems.
"Anything you can imagine and a lot of things you can't imagine," Allgood said.
Kleiner said at the Counseling Center, the number one reason she sees people seek couples counseling is communication. When couples come in, many will say they argue too much, disagree on finances or struggle with intimacy issues.
"The common problem is often related more to the ways in which they communicate about those issues rather than the issues themselves," she said.
Whatever a client's reason for coming in, Allgood said, "This is not for the faint of heart." The counselor has to have the ability to be directive and manage the clients.
"Even when they don't feel it, they have to be able to act confident," he said.
It's not unusual for entire extended families to come in, whether it's to deal with a family conflict or to divide estates. The counselor has to be directive in these situations.
They also deal a lot with anger management, and the counselor needs to know what to do when a situation escalates.
"We have had students in life-threatening situations, and they have to know what to do before they're in that situation," he said.
One thing they don't deal with is domestic violence because special training is required.
The typical client receives about five sessions of therapy, Allgood said, although there are some who will only need one and others who need many more. Some people come in with a problem bigger than the students there can handle, so they are referred elsewhere. Others will come in for one session and realize if they change a certain behavior, things will improve.
For example, a couple who is unhappy in their marriage may realize that if they start doing activities they had given up, they may be happier again, Algood said.
Even in situations like that, it may be better to get one counseling session than none. Allgood said a lot of people consider counseling and therapy a negative thing, but it doesn't need to be. In fact, he said getting counseling earlier is better than later. He said he sees many people who, even though they are good people, waited too long to get counseling, and then it's too late to solve the problem.
"You don't want to rush right into it after your first fight," he said, but if there are patterns and continuous problems, he said it's better to do it now than later.
Kleiner agreed counseling or therapy is important in these situations.
"The longer a couple struggles with particular issues that do not get resolved, the more they develop emotional wounds and frustrations that build walls between them," she said. "The thicker the walls, the harder it is to break them down and work together to resolve issues."
Whatever the reasons for going to counseling and no matter how many sessions they attend, Kleiner said the success of counseling depends on the participants' readiness for change. "I've seen counseling make a significant difference for couples and families," said Kleiner.
The USU Counseling Center is located in TSC Room 306, and the Marriage and Family Therapy Clinic is in the Family Life Center at the bottom of Old Main Hill and is available to students and the community.
-kathrynkemp@cc.usu.edu 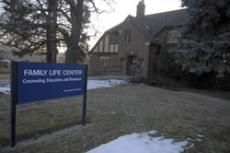