A team of Utah State University wildlife biologists, with varied areas of expertise, are pooling resources to study one of the state’s unique ecosystems and equip land managers with knowledge to reduce conflicts between diverse stakeholders.
“Science should help us arrive at a middle ground that creates a sustainable situation,” says David Koons, assistant professor in USU’s Department of Wildland Resources and a principal investigator of a collaborative study of bison in south central Utah’s Henry Mountains.
Surrounded by Canyonlands and Capitol Reef National Parks, the Henry Mountains rise sharply from a base elevation of about 3,700 feet at Lake Powell’s north shore to more than 11,000 feet at Mt. Ellen. The remote landscape encompasses nearly two million acres of public land managed by the U.S. Bureau of Land Management, where its diverse elevations range from desert shrublands to pinyon-juniper sage steppe to conifer-aspen forests.
Living in this rugged terrain is the continental United State’s only free-roaming, huntable herd of American bison, a prized trophy animal for sportsmen. Descendants of animals transplanted to the area from Yellowstone in 1941, the Henry Mountains herd is thought to be one of the few remaining genetically pure groups of the species. Sharing their home on the range are herds of beef cattle grazed by ranchers who lease the land each year from the BLM.
While bison live at virtually all elevations of the Henry Mountains, cows do not. Conflicts arise when bison remain in the lower elevations and forage in the cattle’s winter range. Challenges for the Utah Division of Wildlife Resources, which manages the bison, include determining how many bison live in the area in a given year, where they prefer to forage, the impact they have on available cattle forage and how many should be harvested during the hunting season.
“Ranchers lease a specific parcel of land for their cattle and if precipitation is low and the land has already been grazed by bison, less forage is available for cattle,” Koons says. “It would be helpful to be able to predict how many bison there are and where they are at different times of the year to avoid conflicts.”
An animal population ecologist, Koons will use global positioning system (GPS) collars on the animals to develop a sightability model for conducting animal surveys. Working in collaboration with Koons, USU doctoral student Pat Terletzky will examine the feasibility of estimating population abundance using technological advances in remote imagery.
“Wildlife managers often use aerial surveys by helicopter or small plane to count animals and compare those numbers with ground surveys,” he says. “But portions of the Henry Mountains are covered with dense vegetation and bison are sometimes hard to spot.”
Collars that use VHF technology are an option available to the researchers and require less money up front but the remote terrain and large study area limit their effectiveness.
“The Henry Mountains are tough to navigate and it can take hours to reach study sites,” Koons says. “The few roads are sometimes impassable, washed out by summer monsoons.”
With funding and assistance from the UDWR, BLM, Sportsmen for Fish and Wildlife, a non-profit organization of sportsmen for wildlife conservation; and area ranchers, the USU research team, coordinated by Wildland Resources Department faculty member and UDWR liaison Frank Howe, will outfit 45 bison with GPS collars to study their population dynamics, space use and competition with cattle.
“Using these collars should provide us with a wealth of data and open a wide array of opportunities for future researchers,” Koons says.
Also using the collars are doctoral student Dustin Ranglack and his faculty advisor, Johan du Toit, department head of Wildland Resources, who will study bison foraging behavior and movement. Using an enclosure experiment, they’ll determine the impact of bison on plant forage species.
Ian Ware, a Wildland Resources master’s student, will compare plant communities grazed by the bison, cattle and both animals. His research, funded by the USU-based Berryman Institute, is conducted with faculty mentor Peter Adler.
American bison of the Henry Mountains make an excellent study subject, Koons says, because they’re what ecologists refer to as a closed population, isolated by natural geological features.
“We’re hoping that taking an in-depth approach to their study will guide management efforts not only of this species but other large mammals of the American West,” he says.
Related links:
Contact: David Koons, 435-797-8670, david.koons@usu.edu
Writer: Mary-Ann Muffoletto, 435-797-3517, maryann.muffoletto@usu.edu 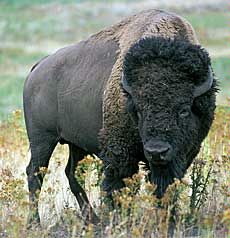 USU wildlife biologists are studying the bison of Utah's Henry Mountains in an effort to seek balance between needs of wildlife, ranchers and sportsmen. Photo courtesy of the Utah Division of Wildlife Resources. 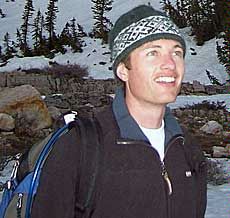