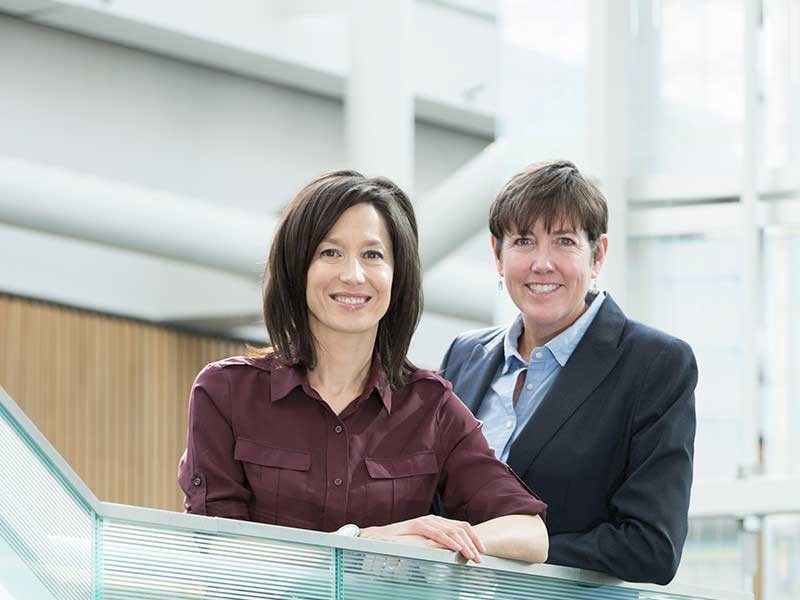 Professors Christy Glass (sociology) and Alison Cook (business management) have collaborated for a decade on research on gender diversity in top business roles. Now, their knowledge is being sought by national media as the numbers of women CEOs dwindle.

A national conversation about the roles and rights of women in the workplace has continued for years, providing lots of material for two Utah State University researchers who’ve long studied the issue of gender diversity.

A series of headlines over the last two months, however, has TV and print journalists from across the nation calling the two scientists for answers.

Christy Glass, a sociology professor, and Alison Cook, a professor of management in the Jon M. Huntsman School of Business, collaborate to research women business leaders in a world where men dominate. The question that’s  guided them has been: What barriers — and opportunities —  exist for women seeking to reach the peak of professional achievement in business, that of CEO of a large company?

Women make up only five percent of CEOs in the Fortune 500, an annual listing of the 500 most profitable U.S. corporations. But recently, five of this already slim number have resigned, said Glass. All of their positions were filled by men.

Most prominent among the women is Indra Nooyi, who for 12 years served as CEO of PepsiCo., one of the top food and beverage business companies in the world.

In an attempt to get at the reasons, a New York Times journalist utilized Glass as an authoritative source for an article titled “Missing: Female CEOs.” She’s also been interviewed by CNN, CNBC and NPR — this last event an hour-long discussion among a panel that included New Yorker writer Sheelah Kolhatkar. The objective, according to host Eric Westervelt, was to “take a hard look at the glass ceiling to the C-suite.”

In an interview for Utah State Today, Glass laughs. “We’re glad our work is getting recognized. This is an important part of the conversation,” she said. “But it’s regrettable that the reason is greater gender inequity.”

The recognition itself is telling, adds Joseph Ward, dean of the College of Humanities and Social Sciences. Glass’s expertise, he said, “is a clear reminder of the necessity of social science research to inform our responses to society’s most pressing challenges.

“After a decade of quantitative research and more than 40 interviews with women CEOs around the globe, said Glass, “we have a pretty comprehensive understanding of this process and the challenges that women and minorities face.”

Her conclusion? “There is overwhelming evidence that companies are systematically denying access to top talent,” she said. “For me this boils down to: Are companies recruiting, hiring and promoting the most talented people? We have clear evidence they’re not.”

In conversations with journalists, sociologist Glass often explains that a crucial step is seeing more women in corporate board rooms. Executives, she said, tend to reach out to peer groups, which tend to be largely male.

As for this recent spate of resignations, Glass believes that several factors figure in.

One is the U.S. economy, which is flourishing.  Troublesome economic periods can force struggling businesses to crisis points. And men, Glass adds, are more likely to turn down those leadership roles.

“Men don’t want to touch a company in crisis — it’s too risky,” she said. “Whereas women believe they may not have another opportunity so they don’t have the luxury of saying no. When companies are doing well, we don’t see as many of those crisis moments that open up opportunities for women.”

Another factor is more political. The current presidential administration has sought to deregulate business requirements and decrease enforcement of anti-discrimination laws. As a result, she said, “There’s a sense that the cops have been taken off the beat.”

Plus, there are those cultural traditions and misconceptions that women have always faced. A quick review of the reader comments on the New York Times article highlights two of the most common arguments. Here are Glass’s responses:

Women aren’t aggressive enough to lead a billion-dollar company, or they simply don’t want to:

Glass points out that the women leaders she and Cook study are not average. Women CEOs, first of all, tend to have fewer children; and, secondly, by the time they’re CEO-eligible at age 50 or 60, any children they do have are grown. Plus, she points out, “Most men CEOs have children, too, and that has not been a barrier for them.”

Children tend to complicate the career of any women in the workplace. And, says Glass, “As long as we  associate parenthood with women, change means two things have to happen. First, men have to take a larger role in parenting, and women shouldn’t face barriers as a result of their having children.”

She points to national surveys that indicate many men want to have greater roles in their children’s life.

PepsiCo CEO Nooyi, in an interview following her resignation, said she was stepping down to spend more time with her 88-year-old mother. “You reach a point where you get tired,” she told the New York Times. “Physically tired. … I’ve reached that point.”

Glass has heard that same sentiment from other women CEOS. “We’ve found that women, who from the outside seem as if they are at the pinnacle of their careers, are exhausted and they’re frustrated because they’ve had to fight every step of the way over a 20- or 30-year career,” she said. “And they are still having to prove themselves.”

The business world, and we consumers, are the ultimate losers, said Glass. “This hurts all of us because it’s kind of a brain drain.

“So for me, this is not just about fairness and equity. It’s really about organizations making sure they have the most talented capable people in their top positions.”