Capturing and tagging moose, dissecting owl pellets and pulling on waders and slogging through wetlands is a far cry from her former job as an escrow officer, but Utah State University student Natalie Kley Schvaneveldt doesn’t regret her career change decision one bit.

“I cannot tell you how grateful I am that I decided to leave everything to pursue my dreams,” says the Riverton, Utah, native, who enrolled in Utah State’s Quinney College of Natural Resources two years ago on a USU Resident Transfer Scholarship. “Every time I have the opportunity to capture a moose, band geese or watch a sharp-tailed grouse dance on a lek, I am reassured I made the right decision. This is exactly where I need to be and I cannot imagine doing anything else in life.”

A wildlife science major, Schvaneveldt has pursued a number of projects to hone her skills, including employment with the Utah Division of Wildlife Resources during summer 2013 and participation in a research project on Mexican Spotted Owls led by USU faculty mentors Frank Howe and Gene Schupp. She’s among a group of about 30 USU students selected to present to Utah legislators Jan. 30 during the state’s 2014 Undergraduate Research Day on Capitol Hill in Salt Lake City.

“The goal of my study is to identify primary prey species and diet composition of breeding Mexican Spotted Owls in canyon habitats across southern Utah,” Schvaneveldt says. “I will also compare my data to past data collected to determine whether or not the prey composition has changed over time.”

Led by graduate student mentor and instructor Leah Lewis, Schvaneveldt dissected hundreds of owl pellets to determine what her study subjects were eating.

“The owls’ diet seems to consist primarily of woodrats and deer mice,” she says. “But we also found bat skulls and insects. In addition, we found what appears to be the skeleton of an avian species we couldn’t identify and possible small rabbits.”

Schvaneveldt says putting the knowledge she’s learned in the classroom to work in the field and the lab has been a valuable opportunity.

“I never realized how much planning and organization is involved in carrying out research,” she says. “It’s been much more complex than I thought. Leah (Lewis) has been a great mentor in helping me set up the data.”

Following graduation from USU, Schvaneveldt, who is a recipient of a John A. Kadlec Scholarship and a Lillywhite Scholarship, plans to pursue graduate study.

“My goal is to work for the UDWR as a big game biologist,” she says. 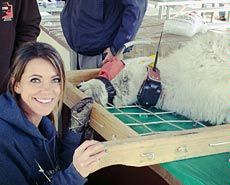 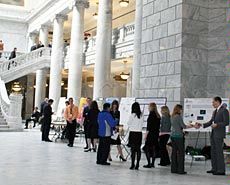 Schvaneveldt will be among about 30 USU students participating in 2014 Undergraduate Research Day on Utah's Capitol Hill Jan. 30 in Salt Lake City.