Show me a true-blooded Aggie from Utah, who doesn’t love the spot WHERE THE SAGEBRUSH GROWS!

The rallying cry of Utah State University’s beloved fight song reveals the deep attachment residents of the American West feel for the stark enchantment of the sagebrush steppe. While sage-studded vistas across the West may seem endless, scientists contend the lands are more fragile than they appear.

“Sagebrush and animal species that depend on sagebrush for survival are threatened by invasions of exotic annual grasses such as cheatgrass and the resulting frequent wildfires promoted by those invaders,” says ecologist Peter Adler, associate professor in USU’s Department of Wildland Resources and the USU Ecology Center. “Climate change will be an additional stressor on top of this.”

Often in a tug-of-war from multiple interests and stakeholders, sagelands provide forage for livestock, opportunities for recreation and contain stores of minerals and petroleum resources ripe for energy development.

No wonder the spot where the sagebrush grows garners adoration.

In an effort to assess the vulnerability of sagebrush ecosystems to climate change, Adler organized a distributed graduate course involving 52 students and 10 faculty members at seven universities from Massachusetts to Washington, along with 13 participants representing state and federal agencies. The multi-institutional team, which Adler assembled as part of his 2011 National Science Foundation-funded Early Faculty Career Development Program “CAREER” award project, gathered for a Dec. 2013 workshop at USU’s Swaner EcoCenter in Park City, Utah.

“The vulnerability assessment was an opportunity to tackle a large, multi-faceted issue using expertise from many sources,” Adler says. “Each university chose a different, specialized focus, such as shifts in the geographic range of species or changes in fire regimes.”

The effort, he says, was not just to gather knowledge, but to train graduate students to collaborate more effectively with agency land managers and equip those managers with relevant scientific information to meet decision-making challenges.

“It is really encouraging to me to see this kind of meeting come together,” Swallow says. “Having the opportunity to contribute is rewarding. There’s often no incentive for researchers and managers to communicate together.”

One incentive, Adler says, are real-life consequences that could restrict the aims of divergent stakeholders. At stake, ultimately, is the long-term health and survival of western sagelands. More eminent concerns are federal restrictions that could halt or seriously constrict varied activities. Of particular concern is the imperiled Greater sage-grouse, which is a candidate for listing under the Endangered Species Act.

The team’s next step in producing a sagebrush vulnerability assessment is to wrap up the analyses and begin synthesizing the findings in a report targeted to land managers. The project participants will also create publicly available fact sheets and work toward publishing research results in peer-reviewed journals.

“We want the conversation to continue,” Adler says. “In addition to providing managers with information, the researchers are getting ideas for new questions to ask about the impacts of climate change on sagebrush ecosystems.” 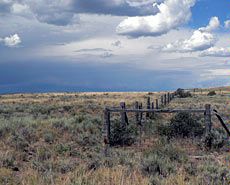 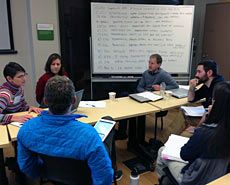 Participants in Adler's distributed graduate course gather during a Dec. 2013 workshop at USU’s Swaner EcoCenter in Park City, Utah. The effort involved 62 scholars from seven universities, along with 13 officials from state and federal agencies.