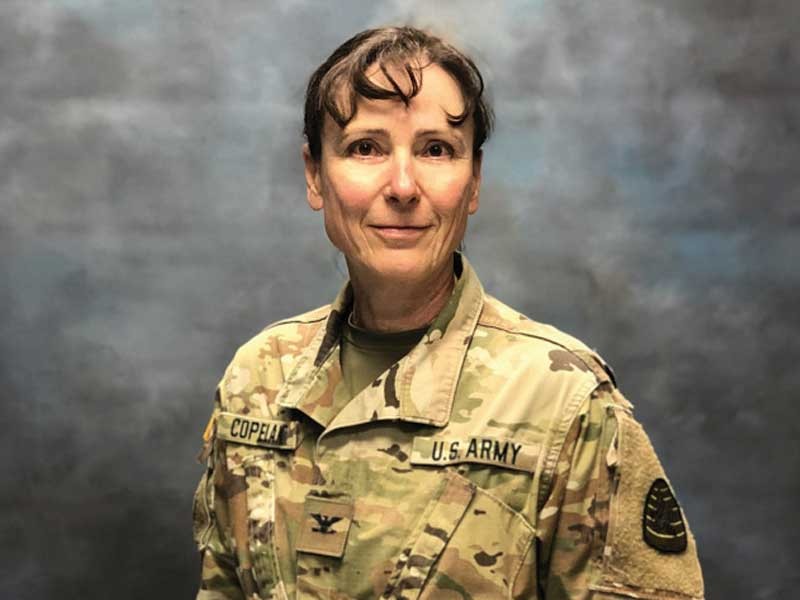 For the Year of the Woman, USU highlights two “now” active duty College of Science alumna:

Milada Copeland’s initial foray into college academics in her native Michigan was less than stellar and ended prematurely. Barely 17 years old when she started her studies, Copeland (BS’88, Biology) admits she wasn’t ready.

“I was more interested in participating in the ski club and the sailing club – the latter of which I was the youngest commodore ever,” she says. “I was also working three part-time jobs.”

Copeland took refuge in Colorado, where she waited tables and trained for cross-country skiing and rifle shooting biathlon, hoping to someday make the national team. As she contemplated her future, Copeland also knew she wanted to return to school and finish her degree. Her coach urged her to look into military service to fund her studies and support her biathlon dreams, as the U.S. National Guard is a team supporter.

Copeland’s path led her to Utah State, where she joined the Army ROTC program and declared a biology major.

“I loved my ROTC instructors, and I continue to rely on the leadership skills I learned in the program,” she says. “I also loved the biology program. Ivan Palmblad was one of my favorite professors and mentors.”

But following the caisson’s dusty trail on the USU campus wasn’t always easy.

“I was the only woman in USU’s battalion, but my fellow cadets treated me as one of the group,” Copeland recalls. “The rest of campus was a different story.”

While male cadets in uniform were idolized, Copeland often endured insults and other harassment.

Nevertheless, she persisted and was named the first female battalion commander at USU.

Following graduation from Utah State and commissioning as an Army National Guard officer in 1988, Copeland embarked on a military career that’s yielded repeated successes and a number of firsts.

“I’ve had so many interesting assignments, including field artillery, engineering, logistics and information technology” she says. “And I’ve had the opportunity to travel throughout the world.”

In 1995, Copeland was the first woman named to lead Utah’s Army National Guard’s 1457th Engineer Battalion Headquarters Company.  The combat unit had just been opened to women and Copeland seized the opportunity.

“I wanted a company command that afforded the same challenges my male counterparts faced,” she says. “It was a great honor and a lot of responsibility.”

Among her most rewarding assignments, she says, was serving as the first brigade commander of a Homeland Response Force from 2010-2012.

“I led 560 soldiers and airmen in CBRNE (Chemical, Biological, Radiological, Nuclear and Explosive) materials response, for one of ten, nationwide FEMA regions, in preparation for a homeland attack,” she says. “It was an opportunity to build a program from the ground up and one of the most amazing experiences I’ve ever participated in.”

Copeland’s team received “Best in Country” for its efforts.

While pursuing her career, Copeland, 56, has earned additional academic degrees, including a bachelor’s degree in computer management and science, an MBA and master’s degrees in cybersecurity and strategic studies.

Her military pursuits, starting with ROTC, forced her to set biathlon aspirations aside, but Copeland, a multi-year finisher of Utah’s Bear 100-Mile Endurance Run, continues to rack up medals and miles in mountain trail running. As for trail shooting, she’s traded a rifle for a camera, adding nature photography to her list of hobbies.

“Being in the military, though not always easy, has been a wonderful career path,” Copeland says. “It’s a great opportunity to serve and do something bigger than yourself.”

“During those years, military service was celebrated; often glorified,” says the 24-year-old. “I wanted to be a part of that.”

Encouraged by her parents and teachers to go to college, she wondered how she might combine both endeavors.

“When I was in high school, my dad, who is retired from the Air Force, told me about ROTC,” Muffoletto says. “I thought, ‘That would be perfect for me.’”

“It was a great experience and I decided to major in biological engineering, when I started at Utah State,” Muffoletto says.

But after a year of engineering classes, beginning in fall 2013, her interest was waning.

“I hated admitting it, because my professors were so helpful, but I realized it wasn’t the degree program for me,” Muffoletto says. “I needed a new focus and, frankly, I was a little panicked. I’m a person who always has a plan and my plan was falling apart.”

She heard about USU’s ABET-accredited industrial hygiene program in the Department of Biology and decided to talk with Public Health advisor and senior lecturer Carl Farley.

“We clicked immediately as he described the program to me,” Muffoletto says. “I’ve been passionate about industrial hygiene ever since.”

In the meantime, she hit her stride in USU’s Air Force ROTC Detachment 860, where she found encouragement and friendship.

“I had a lot of great mentors and one who stands out is Lt. Col. Alex Dubovik,” Muffoletto says. “While teaching us to be leaders, he’d say, ‘No one wakes up in the morning saying, “I’m going to screw up at work today.”

He was teaching us that, to help people we supervise succeed, we have to ensure we set them up for success.”

Muffoletto served as cadet wing commander during her senior year at Utah State, which gave her first-hand experience in challenges leaders face. One, in particular, was figuring out how to recruit and retain female cadets, which are consistently fewer in number than male cadets.

“There’s not one easy solution, because a lot of factors are in play,” she says.

“I arranged for Professor Sandick to speak with our cadets and she was a very effective facilitator,” Muffoletto says. “The purpose wasn’t to place blame on anyone, but to build awareness of issues and how to deal with them.”

“The Air Force has traditionally allowed only candidates with bachelor’s degrees in an engineering discipline to enter this field,” she says.

During her first, three-month round of technical training at Ohio’s Wright-Patterson Air Force Base School of Aerospace Medicine, Muffoletto found herself at no disadvantage among engineering graduates. In fact, she became an impromptu tutor.

“Thanks to Carl Farley and (USU principal lecturer) John Flores’ thorough training in physical, chemical and biological hazards, I was able to guide puzzled classmates, who were taking their very first industrial hygiene courses, through the sometimes confusing computations,” she says. “I had an excellent foundation.”

“The classes and labs were tough but now, as I often work with gas chromatography-mass spectrometry instruments, I’m grateful I know how to read the graphs they spit out,” she says. “I can thank my Utah State education for that.” 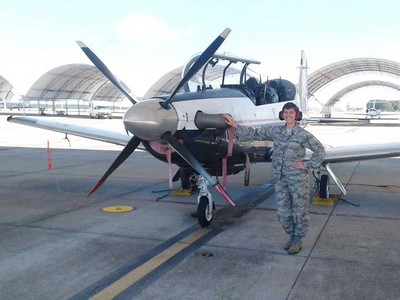 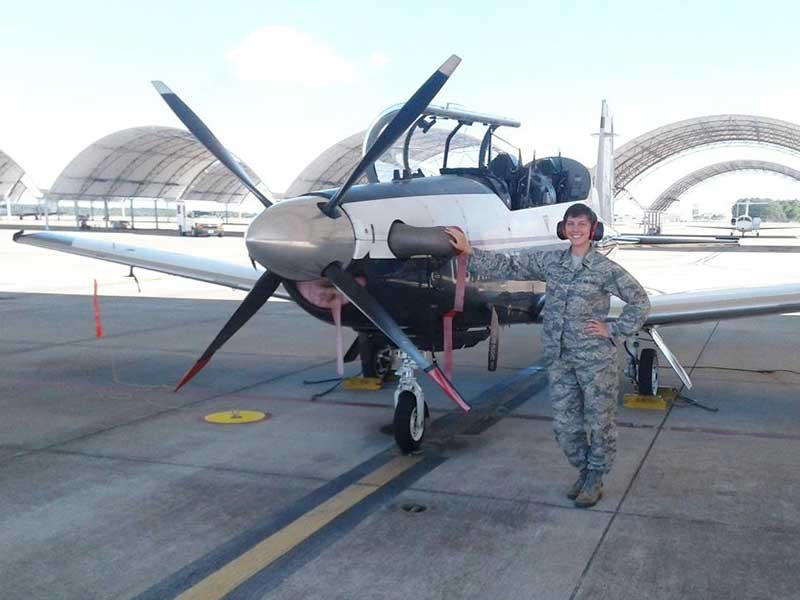