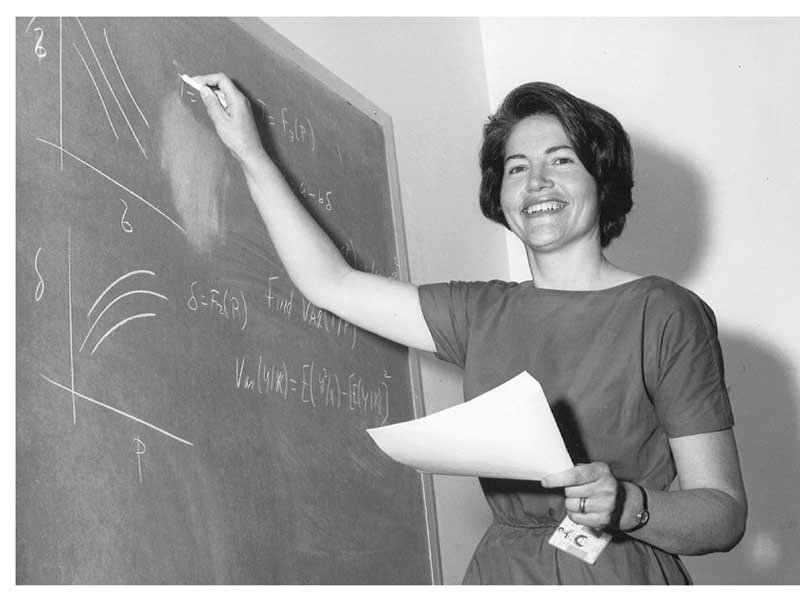 Ruth Lemon Novak graduated with a bachelor's in mathematics in the late 1950s, followed by a master’s in applied mathematics and statistics. She was usually the only woman in her courses at the time. She began her career at Hercules Aerospace Corporation as a statistician in 1960.

Ruth Lemon Novak was born in 1936 in the rural town of Francis, Utah. She worked hard on the family farm with her seven other siblings. Growing up in a large family during the end of the Great Depression and the duration of World War II, she learned the importance of thrift and cooperation.

“I worked in our large garden, put up hay and helped with the cows,” she says. “I was kind of a tomboy.”

While Novak’s father worked hard to teach all the children to work hard on the farm, her mother, a graduate of University of Utah, had a desire for all of her children to obtain a college education.

“My first major was art, but I soon concluded that I wasn’t much of an artist,” she says. “My brother-in-law, who was majoring in civil engineering, suggested I try a math class.”

Heeding her brother-in-law’s advice, she enrolled in a class taught by Professor Vance Tingey, head of the department. She was the only woman in the class; a position in which she’d find herself many times in the future.

“He was a real character and an entertaining teacher,” she recalls. “He mentored me and told me what a good career I could have with a degree in mathematics.”

Novak also had a passion for sports. She participated in intramural basketball, volleyball, tennis and softball – just about every athletics opportunity offered to women in those days. Her coaches urged her to major in physical education, but Novak “didn’t want to be a P.E. teacher.” While she loved sports and thought they were important, she chose to pursue a math major and a physics minor.

While Novak was usually the only woman in her courses, she wasn’t intimidated by the odd glance or off-hand comment, though one encounter with a classmate sticks in her memory.

“A fellow in one of my classes commented one day, ‘You know, Ruth, you can’t feed a husband ‘xy to the square.’”

In May 1958, as undergraduate commencement approached, Novak began to consider her career options.

“I was looking for a job, but there were still some companies that wouldn’t even consider hiring a woman,” she says. “I was in a bit of a quandary.”

As Novak studied job opportunities posted on the Math Department’s bulletin board in Old Main, Professor Neville Hunsaker happened by.“He asked about my plans and I explained my situation,” she says. “He said, ‘How would you like to stay here? I’ll give you a fellowship to graduate school.’”

Novak jumped at the opportunity and spent the next two years studying with professor Joe Elich, while earning a master’s degree in applied mathematics and statistics.

Waiting two years to find a job made a difference.

“By this time, the space race had ramped up and opportunities in STEM fields were opening up to men and women,” Novak says.

When Hercules Aerospace Corporation came recruiting to Utah State in 1960, Novak was ready. When she arrived on the Bacchus campus on the foothills of the Oquirrh Mountains, she wasn’t sure where to go. Directed to the main administration building, a clerk glanced at the young woman, then shuffled through a notebook, searching unsuccessfully for Novak’s name.

“Hmm, who are you going to be a secretary for?” the clerk asked.

Her name located and role sorted, Novak was assigned, as a statistician, to the company’s quality assurance department, and quickly dove into urgent assignments.

In the heady, space-race atmosphere, being a woman “wasn’t a hardship,” she says. “Everyone was new and, at the time, there wasn’t a real hierarchy,” Novak remembers. “Not so much attention was paid to gender but, instead, who could do the job. I was recognized for what I did, not who I was.”

Within a year, Novak was promoted to a supervisory position and career advancements continued to follow. Heading into a new decade, she became department manager and, eventually, a program manager for the development of motors for the Pershing II missile system. She oversaw a team of scientists and engineers and was ultimately involved in almost every strategic weapons system – Polaris, Trident, Poseidon and more – in production at Hercules.

Working with both Army and Navy programs, Novak became manager and, subsequently, vice president of Navy program at Hercules, and was responsible for directing the Navy Fleet Ballistic Missile Programs. In 1987, she was named general manager of the Utah operation of the corporation, heading up all operations, ranging from strategic and space to science and technology, overseeing nearly 3,800 personnel.

As her career trajectory rose, Novak met the love-of-her-life, Phillip Novak, a Hercules engineer, Montana-born and son of a hard rock miner who’d immigrated to the United States from Slovenia. The couple, who shared a love of the outdoors and sports, married in 1966.

“Phil was considered an engineer’s engineer, because he could solve most problems and fix anything,” Novak says.

As a manager, Novak followed guidelines implemented under affirmative action laws passed in the 1970s.

“These new laws included sensitivity training to ensure women and other minorities were afforded equal opportunities,” she says. “I found I had biases, too, and worked to overcome them.”

“A number of these employees did very well in their studies and were eventually promoted to technical and supervisory positions,” she says. “We also made an effort to hire more women and minority engineers and scientists.”

Realizing that fostering advancement among women begins at an early age, Novak teamed with colleague Ann Erickson, dean of Salt Lake Community College, and several other women, to form the Utah Math/Science Network in 1980.

“Anne had been to a conference in California and learned of the national ‘Expanding Your Horizons (EYH)’ program,” Novak says. “She thought we should organize and annual EYH conference for Utah and our network was born.”

The premise of EYH, she says, is to recruit women professionals in the STEM fields to meet with middle and high school girls for an annual, one-day workshop.

“We learned the teen years – especially the middle school years – are a critical time for girls in STEM,” Novak says. “Many drift away from math and science. The idea with the EYH gathering is to gather adult role models, who can mentor these young women and spark their interest in continuing their studies in math and science.”

EYH conferences have moved around the state’s university and college campuses, but they continue to inspire children to set goals and not let biases become barriers.

In addition to the work that Novak did in industry, she served on USU’s College of Science Advisory Board, where she advised deans and department heads on ways to prepare aspiring scientists for success in academic and professional pursuits. Novak also participated in the Utah Women’s Forum and The Coalition for Utah’s Future; the latter initiated by the late Utah Gov. Scott Matheson.

“With the Utah Women’s Forum, I had the opportunity to meet a lot of women I wouldn’t have met otherwise,” she says. “Networks like these are valuable for women. We keep thinking that’s everything’s okay, but women are still only making 70 percent of the money that men do in the same profession. So, there’s still a need for women to organize and support one another.”

Maura E. Hagan joined Utah State University as dean of the College of Science in September 2015. Prior to her arrival at USU, Dean Hagan, who is also a professor in USU’s Department of Physics, served as interim director, for one year, for the National Center for Atmospheric Research in Boulder, Colorado. The Massachusetts native previously served as deputy director at NCAR, which she joined as an entry-level High Altitude Observatory scientist in 1992. She was promoted to senior scientist, the NCAR equivalent of full professor, in 2003.

Hagan’s personal research interests are focused on the downward penetration of space weather effects in the Earth’s atmosphere, as well as the impact of meteorological weather on the near-Earth space environment. She is a co-investigator on a NASA Explorers Program Missions of Opportunity Small Complete Missions grant to USU’s Space Dynamics Laboratory to develop the Atmospheric Waves Experiment (AWE) project.

Dean Maura Hagan is among 100 U.S. scientists and 25 international associates elected in 2019 to the National Academy of Sciences, one of the world’s premier academic institutions, which provides science advice to the U.S. federal government and other national and international policy-making organizations.

“Dean Hagan not only continues her groundbreaking contributions to atmospheric research but, by her leadership and service, is guiding USU’s scientific research and teaching efforts toward a successful future,” says USU President Noelle Cockett. “We celebrate her well-deserved recognition from the NAS.”

Hagan is among a historic number of women elected to the NAS this year and, as the first woman to matriculate through the scientist ranks at NCAR’s High Altitude Observatory, where she was a strong advocate for efforts to increase inclusion of underrepresented minorities in the scientific community. She was instrumental in bringing the American Physical Society Committee on the Status of Women in Physics to NCAR to assess its workplace environment for women. She also served on the inaugural Significant Opportunities in Atmospheric and Related Sciences steering committee from 1996 to 2001, aimed at engaging an ethnically diverse population in Sun and Earth system science discovery.

This past January, Hagan served as a featured speaker at the American Physical Society’s 2019 Conference for Undergraduate Women in Physics (CUWiP) at USU, one of 12 campuses in North American selected to host the gathering of undergraduates from schools throughout the American West. 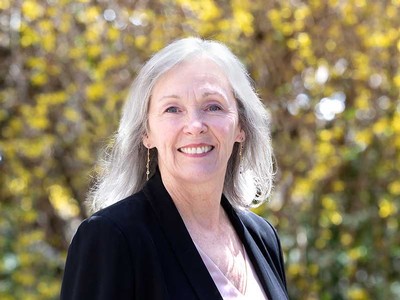 Maura E. Hagan joined USU as dean of the College of Science in September 2016. Prior to her arrival at USU, she served as interim director, for three years, for the National Center for Atmospheric Research in Boulder, Colorado. In 2019, Hagan was among 100 U.S. scientists and 25 international associates elected in 2019 to the National Academy of Sciences. 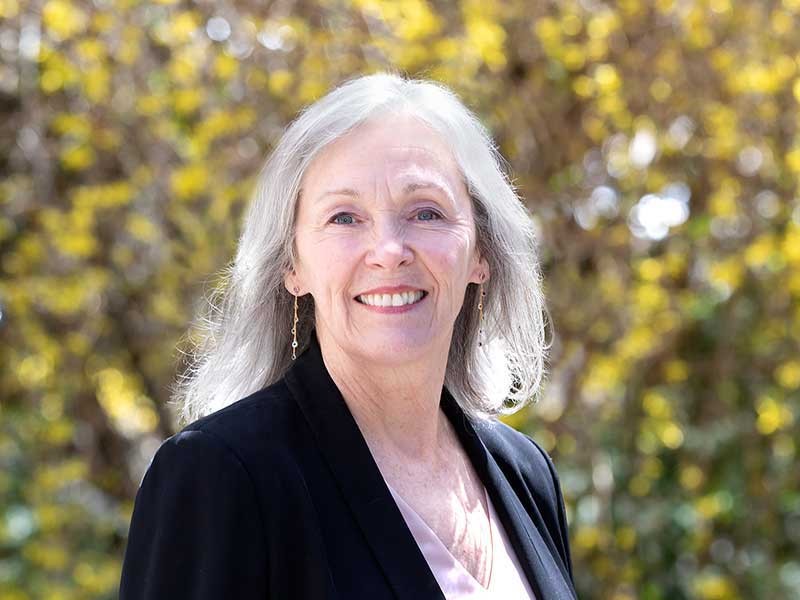