Spicer-Escalante gave his Inaugural Lecture Series presentation Feb. 27, the 11th lecture of this academic year’s installment. His lecture, “Are We There Yet?: An Academic's ‘Long’ Journey into the Light,” described the correlation between his research and life.

“One of the areas I do my research on is travel writing, and I see this passage towards becoming a full professor as journey, much like traveling,” said Spicer-Escalante.

From a young age, Spicer-Escalante had the opportunity to travel to various parts of the world.

“I was a product of the opportunities I had, and travel became an important part of my life,” said Spicer-Escalante. “Traveling abroad as a teenager opened my eyes to many things in the world and gave my world view a different shape.”

Through all of the world travel, Spicer-Escalante has been involved in travel writing.

“The broader notion of travel is exposure to different worlds and how we engage in them,” he said. “Travel writing is a very broad category that can be anything from travelogues, travel guides, online categories and is even prevalent in cinema.”

Spicer-Escalante graduated with bachelor’s degree from Kansas State University in economics and Spanish. He continued his education and earned a doctorate from the University of Illinois, and went on to teach in two different institutions in Michigan.

In 2002 USU had a position in Spicer-Escalante’s field of study, 19th century Latin American literature and culture.

“I fell in love with Cache Valley the day I got here on January 15, 2003. The students are genuine, honest and have a gifted language ability,” said Spicer-Escalante.

Since joining USU, Spicer-Escalante has focused his research on literary naturalism of the late 19th century, travel writing and contemporary Latin America cinema.

“I like the support I get from USU to carry out my research,” he said. “It’s been instrumental in allowing me to found a journal in my field of study that has become the standard for my profession in my specific discipline.”

Over the years Spicer-Escalante has continued to improve his teaching to students at USU.

“I have become more philosophical about linking my research to my teaching to help open my students’ eyes to the world around them. I see myself as not only a Spanish professor but also as a life mentor,” said Spicer-Escalante. 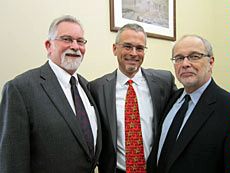