The Western Rural Development Center’s latest publications — a series of population briefs — are one more effort by the center to deliver resources to improve the quality of life in the rural West.

Located at Utah State University, the WRDC is one of four regional centers nationwide designed to strengthen the capacity of local citizens to guide the future of their rural communities. Each of the four centers links the research and Extension capacity of regional land-grant universities with local decision makers to address a wide range of rural development issues.
“We try to provide whatever is necessary to improve the lives of people in rural America,” said Don Albrecht, director of the Western Center. “Better information will lead to better decision making, so it is our job to be the source of complete and accurate information about their communities.”
Albrecht said the center has a multi-dimensional focus. It initiates projects by bringing resources and people together to jump-start innovative concepts. It also brings eclectic groups of people together to explore issues, learn about one another’s values and goals and think creatively about how to shape the rural West. The center also supports the creation of businesses and the development of desirable assets using a sustainable approach, supporting local cultures and creating the ability to seize emerging opportunities and solve problems.
That means communities can come to the WRDC for the latest information about issues such as economic development, energy development, public policy, rural health, sustainable development, natural resources and more.
The “population briefs” summarize population trends and how those trends might affect health, employment, poverty, minorities, education and land use.
The series was developed in response to requests from researchers and nonprofits throughout the 13 Western states that were in need of demographic data pertaining to the rapidly changing populations in the region. The series includes regional overviews about “The Changing West,” “Employment, Income and Poverty,” “Education,” “Health and Longevity,” and “Land Use and Resources” and one brief for each of the 13 Western states.
“The size and composition of the population in the Western states is rapidly changing,” Albrecht said. “Accurate and timely information is essential to our stakeholders. These population briefs provide this information in a readily accessible and easy-to-read format.”
Albrecht served as the researcher and author for the briefs. His goal is to make this information available to researchers, community leaders and nonprofits that otherwise may not have access to this important demographic data.
“Rural community developers throughout the West face many challenges, and before they begin to shape their communities for future success they must have an understanding of their current populations and conditions,” he said. “These population briefs provide them with that baseline information.”
Statistics pertaining to health insurance coverage among residents of the Western states are of particular concern at the moment, he said. The Health and Longevity brief, for example, said the residents of Western states are much more likely to be without health insurance than the average American. Only in Hawaii (9.6 percent) do a smaller percentage of people lack health insurance than the national average. Four western states (New Mexico, Nevada, Arizona, and Montana) and several Southern states (Arkansas, Florida, Louisiana, Mississippi, Oklahoma and Texas), are among the 10 states with the highest rates of uninsured individuals in the nation.
The Western Rural Development Center links the research and extension capacity of land-grant universities in 13 Western states and four U.S. territories. The WRDC is funded by the U.S. Department of Agriculture’s Cooperative State Research, Education and Extension Services. It also receives substantial support from several USU units, including Cooperative Extension, the Agricultural Experiment Station and the College of Natural Resources.
Contact: Don Albrecht, 435-797-2798
Writer: Tim Vitale, 435-797-1356
November 2008 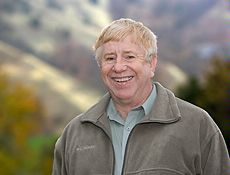 Don Albrecht is the director of the Western Rural Development Center, which aims to deliver resources to improve the quality of life in the rural West.