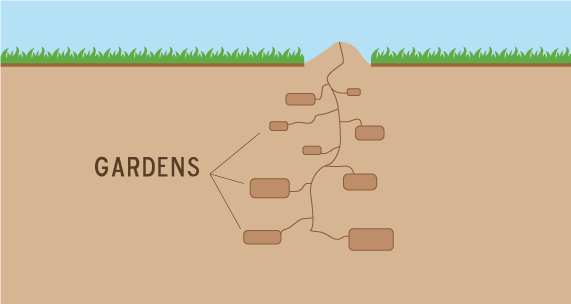 What is an Ant Garden?

The leaf-cutting ants of Central and South America create their food supply by forming a mutually beneficial association with certain fungi. They grow these fungi on gardens created from piles of disks they have cut from living leaves. The ants cannot digest cellulose, a complex molecule found in the cell walls of leaves, but the fungus can. By using the cellulose as food for its own growth, the fungus converts the cellulose into carbohydrates. The ants then eat the fungus. The fungus benefits from a guaranteed food supply and the elimination of competing fungi. Neither the ants nor the fungus is found separately in nature. The ants house the beneficial fungus in their nests, supply it with leaves, and remove any invading fungi. Ant nest mounds extend up to three feet underground. They consist of many chambers--2000 in an average sized colony. Each chamber is 8 to 12 inches (200-300 mm) in diameter. Nest building raises a huge mound of soil. Ants constructing an average-sized mound carry 88 tons (80,000 kg) of soil to the surface.

How are Ant Gardens Made?

Worker ants search for leaves, cut out disks, and carry them back to the nest. At the nest, the leaf disks are passed to other workers. They clean the disks and cut them into 1-2 mm (1/32 of an inch) pieces. Then they crush these tiny pieces and mix them with their saliva. The paste-like material that results is added to the garden. The workers transplant bits of fungus tissue from older parts of the garden to the new leaf paste. The new material becomes covered with a cottony mass of fungal hyphae. The workers continuously walk over their gardens, eating any invading foreign hyphae and adding secretions. The secretions contain chemicals that help the ants eliminate unwanted species of fungi. If the ants are removed, other fungi quickly colonize the garden. The ant fungus produces hyphae (filaments) with swollen tips which are harvested and fed to larval ants, or eaten by adults. The ants do not allow the fungus to mature and sprout mushrooms in the nest. Mushrooms are produced, however, in laboratory cultures of the fungus.

In time, a garden can no longer support the growth of the fungus. A new garden is then built in a different chamber, or the old garden is recycled. The oldest leaf material is carried to the surface and dumped several yards away. The ants replace the old leaf paste with new material. Leaf cutting ants are common in the tropics, where nests may be located as close as four yards (meters) apart. In the United States, these ants can be found in Texas, Louisiana, Florida, the Carolinas and even as far north as New Jersey. They are a serious pest in the tropics, where they destroy all the leaves on trees and crops. In Texas and southern Louisiana they have caused massive damage to orange and other citrus trees. Some termites and other insects also create fungus gardens. 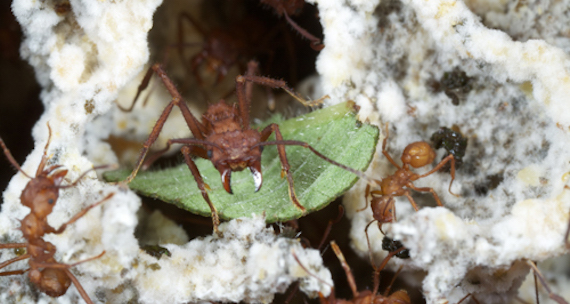