What are Data Collections?

Mycologists (biologists that study fungi) collect or are given mushrooms and other fungi as part of their research. Research collections result when these fungi are dried and saved. Research collections contain an enormous amount of historical and potential information. The collections provide the physical material used to describe colors, shapes, habitats, hosts, microscopic features such as spores, and for the extraction of DNA.

Collections are also vouchers, or evidence, for the existence of a species. When a mycologist discovers a new fungus species, he or she describes it in a journal article or book. If other mycologists doubt that a new species is truly new, they can borrow the collections used to prepare the description and examine them personally. Research collections are stored and studied in a musuem called a Herbarium.

Herbaria contain only plants or fungi. They are usually part of a university or botanical garden and rarely have exhibits for the public. They can be as small as a single room containing a few hundred collections in one or two cases, or a very large facility housing millions of collections. The Fungus Collection of The University of Michigan Herbarium (MICH) houses 280,000 collections in 326 cases. MICH, as a whole, also includes 1,360,000 collections of Plants and Algae.

Collections of accepted species remain valuable as vouchers. For example, before microscopes, spore shape and size were not known to be different for each fungus species. Descriptions of fungus species recorded only what could be seen with the naked eye. After microscopes became common, precise descriptions of spores became a necessary part of a species description. With each advance in investigation, the amount and kind of information that is considered an adequate description of a species changes. Specialists borrow collections of accepted species to re-study them and incorporate new data into their descriptions. Revised descriptions provide a more accurate portrait of a fungus species as a unique organism.

Collections are just as valuable for their potential information. Mycologists collecting mushrooms in the early 1900’s did not know about DNA. Today, the DNA extracted from their collections helps increase our understanding of how different species of fungi are related to each other. Those earlier mycologists could not have imagined that some species of fungi would become extinct or endangered due to global warming, pollution or the destruction of their habitat. Today, their collections can be used to make lists of species that no longer exist, aid in the reconstruction of the biota of a destroyed habitat, or provide a record of the changes over time in the fungi growing in a habitat. As new methods of investigation are discovered, the record of identity, time and place contained in research collections will continue to result in new information.

Herbaria were first established in the 15th century as a reference and teaching tool for the medicinal gardens of monasteries. Today, a herbarium is considered a museum because it preserves biological specimens. Most herbaria have no public exhibits. Herbaria that are part of a public museum may have public exhibits about fungi. The Field Museum of Natural History in Chicago, Illinois, is an example of an exhibit museum that contains public displays, a herbarium and other research collections of animals and fossils.

Collections often include other elements related to the physical specimens. Mycologists take notes on their collections and often make spore prints. They take photographs of fresh fungi because the color and shape often change when fungi are dried. Before cameras were common and portable, they often made small watercolor or oil paintings of their collections. Special photographs are also made with the help of a scanning electron microscope. These photographs are more highly magnified than those taken through an ordinary microscope. SEM photographs clearly show spore details and cell structure. Data on the unique structure of different genes is also being collected for many species. Other elements of a collection might include a publication that mentions the collection, commercial patents listing a voucher collection, letters, "field books", etc.

Collections and their related materials can require a lot of space for storage. Collections also require a lot of care--curation. Insect control is vital for the safety of the specimens. Storage boxes must be repaired or replaced. The loan of collections is also part of curation. Hundreds, even thousands of collections can be loaned out and received back in a single year. The herbarium staff selects, packs and ships the loan and refiles the collections when they are returned. Returned collections often contain a new collection element: new information, added by the borrower on an annotation slip.

One important part of a curators job is answering questions. Curators often serve as experts, answering questions on fungi from the public, government agencies, hospital emergency rooms and poison control centers. The questions most frequently asked by the public are requests for information on how to kill mold on walls, books, etc., how to grow molds for school science projects, and for help in determining the edibility of mushrooms gathered from the wild. 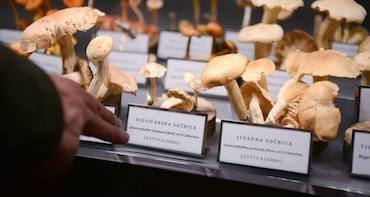 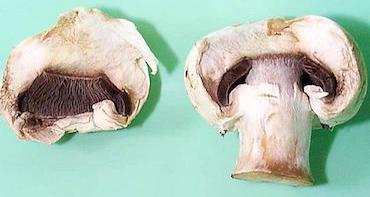 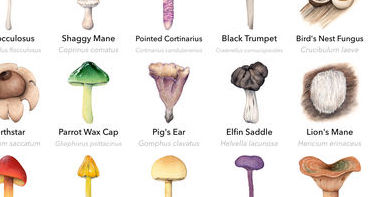