Certain species of fungi and bacteria are the engines of the process of decomposition. When plants grow and produce new leaves, fruits, and stem wood, they use scarce nutrients like nitrogen to make the new tissues. Over time, without decomposition, so much nitrogen would be locked up in leaves and other tissues that there would not be enough nitrogen available for the plant to make new leaves, stems and wood. The surface of the ground would also be buried by dead leaves and wood lying forever where they fell. Fungi and bacteria are the major organisms decomposing dead leaves and other organic matter. Here, we do not use the word "organic" in the same way it is used by the food industry. In Biology and Chemistry, "organic" describes any material made up of molecules containing carbon and hydrogen atoms.

All living things, and a few other surprising substances, are considered organic. Decomposition is a complex process. Organic matter is broken down into carbon dioxide and the mineral forms of nutrients like nitrogen. It is also converted into fungi and bacteria through these organisms feeding on the organic material and reproducing. Scientists call the organisms that decompose organic matter decomposers, saprobes or saprotrophs. Fungi and bacteria are not restricted to decomposing leaves and other plant materials. They will decompose any dead organic matter, whether it is a cardboard box, paint, glue, pair of jeans, a leather jacket or jet fuel. Jet fuel? Yes! — remember that jet fuel is made from petroleum, which is made of decomposed microscopic creatures from the oceans of the Mesozoic Era.

How Does Decomposition Work?

Decomposition is made up of a number of subprocesses. Consider the decomposition of leaves. Earthworms and other soil animals break the leaves into smaller pieces in a process called fragmentation. This is an important step, because smaller fragments have more surface area to support the growth of bacteria and fungi. Bacterial growth is especially affected by fragment size, since fungi can penetrate substances more easily than bacteria.

Rainwater percolates through the leaves, dissolving and carrying away some of the chemicals in the leaves in a process called "leaching". The movements of earthworms and other soil animals stir the leaf fragments and mineral soil particles together in a process called "mixing". The result of the interaction of these processes can be seen in the changes in the leaves. The fallen leaves started out whole, and were green, yellow or red. They were reduced to small dark brown shreds as their fragments became heavily colonized by fungi. Finally, at the end of the processes of decomposition, they have become fine black particles of soil organic matter, and their original shape no longer exists. The speed at which the decomposition occurs, called the "rate of decomposition", depends on the temperature, moisture and chemical composition of the organic matter. If the temperature is too low, or too high, fungi and bacteria cannot grow and the rate of decomposition is slow.

If the leaves have a low nitrogen content, the rate of decomposition is slowed because fungi and bacteria can not extract enough nitrogen to make proteins they need for growth. The oxygen level is another important factor, since fungi require oxygen for growth. In lakes and other low oxygen environments, fungal growth will be slower and thus decomposition will be slow. If decomposition could not occur, the nitrogen in dead organic matter would remain locked up. Plant growth would decrease over time as the nitrogen the plants took from the soil was not replaced. This would be a catastrophe, because plant growth supplies all of our food. We need it to feed ourselves directly in the form of grain, fruits and vegetables, and to raise the animals we eat. By understanding the factors controlling decomposition we can protect our food supply, and increase plant growth.

Decomposition can be a problem on a large and small scale. The U.S. military wouldn't want fungi to decompose uniforms and tents in a wet environment, or dissolve the glue holding the lenses in a pair of binoculars. Wooden buildings need regular attention to prevent their wood from being invaded by rot. In our own homes, we don't want our food to become moldy.

Many times, we want to stop decomposition. The enormous amount of organic matter produced by decomposition creates problems of storage and disposal. In nature, a forest produces about a pound of dead leaves and wood per square yard every year. This may not sound like much material, but consider the amount that would fall on an area the size of a football field or soccer field. An American high school football field, including end zones, covers 6400 square yards (120 by 53.3 yards wide). A football field-sized area in a forest would be covered by 6400 pounds, or 3.2 tons, of dead organic matter per year. A soccer field covers 8800 square yards (110 by 80 yards wide).

An area this size in a forest would be covered by 4.4 tons of dead organic matter. To give an idea of how much material this is, remember that an average-sized car weighs only 1.5 tons. American cities produce even more organic waste (garbage) than forests, and very little of it decomposes and becomes recycled into new plant growth by natural processes. Every resident of Los Angeles produces 7 pounds of garbage per day! This is equal to one ton of garbage per year per person. The disposal and recycling of nutrients in garbage is a large problem because of the huge amount of garbage produced every day. Sanitary landfills are the current solution to the garbage problem. 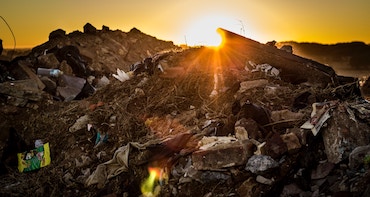 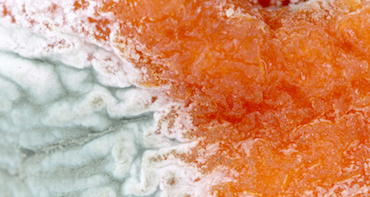 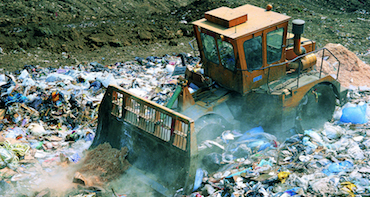 The first modern sanitary landfill was built in Champaign, Illinois in 1904. The phrase "sanitary landfill" was invented in the 1930s by Jean Vinenz, the commissioner of public works of Fresno, California. By 1945, about 100 American cities had sanitary landfills; by 1960 there were 1400. Before sanitary landfills were invented "dumps" were used to dispose of garbage. Dumps were open, the garbage was not covered, and the garbage was often burned. Dumps smell terrible, are often surrounded by blowing paper, attract flies and provide food for large populations of rodents. Sanitary landfills have less odor, there is no black smoke from burning tires and garbage, and the number of flies and rodents is greatly reduced, hence the term "sanitary". The largest American sanitary landfill is the Fresh Kills Landfill on Staten Island, New York. It opened in 1948 and covers 3,000 acres, a rectangular area roughly 3 by 4 miles. When it reached full capacity and closed in 2001, its estimated height was 505 feet. If it had been allowed to get any taller, it would have interfered with air traffic.

Landfills are usually lined with several feet of dense clay and then sealed with thick layers of plastic to prevent leaks of hazardous chemicals. The garbage is dumped in rows or piles from 10 to 20 feet high. Bulldozers are used push the garbage into rows and squash large objects. Compactors with 5 foot wide studded rollers are also used to squash the garbage. Squashed garbage takes up less space extending the life of the landfill. Each day, soil, glass, or plastic foam pellets is spread over a landfill to reduce odors and pests. The soil covering also reduces the amount of rainwater that seeps in. Invading rainwater carries water-soluble chemicals out of the garbage to form liquids called leachates. When leachates pool in the bottom of the landfill, they are pumped out, collected and treated. The treated leachate is handled like sewage. The particles, called sludge, are separated from the liquid and burned, or used as fertilizer, or dumped in the ocean or back into the landfill. If the sludge is considered hazardous, it is shipped to a hazardous waste disposal site.

Landfills also produce methane gas. Once landfills are full, they are often capped with a layer of clay. The cap excludes water, reducing the danger of chemicals leaching from the landfill into the surrounding soil and groundwater. The cap also greatly slows the movement of oxygen from the atmosphere to the buried garbage. When the oxygen available below ground is used up by fungi and bacteria, their decomposing activity stops. Easily decomposed organic substances will continue to be broken down by anaerobic bacteria, which can live where no oxygen exists.

Methane gas is one of the products of their decomposing activity. The anaerobic condition (very low to no oxygen) and low moisture level in the garbage stops or greatly slows decomposition. The garbage is essentially "mummified" in this stable environment. Newspapers that have been buried in landfills can still be read 20 years later. Only one-third to one-half of even easily decomposed materials such as lawn, garden and food waste is decomposed after 20 years. The newest landfills contain a system of perforated pipes to collect methane gas. Methane is one of the main ingredients of natural gas, and is dangerous because it is explosive in high concentration.

In April, 2000, a house in Michigan was destroyed when methane seeped from an old nearby landfill into its basement and then exploded. To dispose of methane, it is sometimes released into the air or burned, but it can also be purified and used as fuel. Releasing methane into the atmosphere is not recommended because it is a potent "greenhouse gas". Methane and other greenhouse gases are responsible for destroying part of the ozone layer in our atmosphere, which protects us from harmful solar radiation. Landfills are expensive to build and run. The cost of landfills can be reduced by making them last longer, which means filling them more slowly. One way to reduce the amount of garbage being deposited in landfills is for homeowners to compost lawn, garden and food waste.

Homeowners usually construct a compost heap from a mixture of lawn and garden waste (grass clippings, leaves, branches) and garbage. Paper and cardboard are sometimes added, but they take longer to decompose. The resulting compost is a soil which contains a high percentage of fine organic matter whose nitrogen and other nutrients can be easily used by plants. Compost can be used to pot plants, or enrich the soil in vegetable and flower beds.

By using what we know about decomposition, homeowners can adjust the rate at which the compost heap decays. The rate of decomposition can be increased by adding earthworms, mixing the contents occasionally, adding chemical fertilizer, and the keeping the heap moist. Chemical fertilizer is added when the organic material has low nitrogen levels, because fungi and bacteria also need nitrogen to grow. Mixing the compost is probably the hardest step, because a cubic yard of compost weighs about a ton.

Ants may have discovered composting before us. Fungus growing ants collect leaves and inoculate them with a fungus that decomposes the leaves. The ants harvest the fungus for food and discard the decayed leaves. 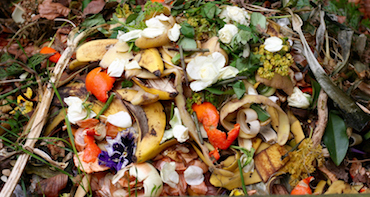 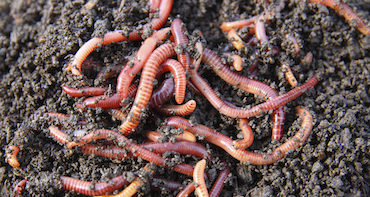 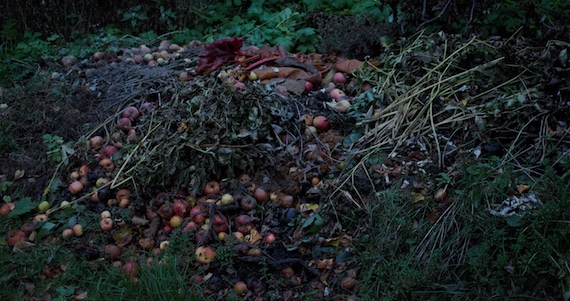