What is Spore Dispersal

Fungi and plants are sessile (immobile). Unlike animals, they cannot walk or fly to new habitats. Their immobility generally leaves only two ways for fungi and plants to extend their range: they can grow into an adjoining area, or disperse spores or seeds. Most fungal spores are single cells. They can travel beyond the physical limits of their parent into more distant territory. An organism's physical growth for a single season usually limits yearly dispersal by growth to short distances. The maximum outward growth rate of fairy rings in the soil is only 8 inches (20 cm) per year. In plants, outward growth is also slow. Aspen clones, for example, are created by the roots of the parent trees sending up new stems on the edge of the clone. This type of growth results in a dome-shaped cluster of trees because the older trees in the center are taller. Fairy rings and aspen clones can become enormous, but it takes hundreds to many thousands of years. An aspen clone in Utah covers 17.2 acres (43 hectares) and is estimated to be one million years old.

Spore dispersal is a two-step process. The first step is spore discharge or release. The second step is dispersal away from the parent. Fungi have evolved a number of different mechanisms for spore discharge and dispersal. Many plant seeds depend upon wind to increase the range of dispersal. Some seeds are modified to increase the chances of long range dispersal. If the seeds are heavy, or the wind light, the seeds will land close to the parent. Seeds with "wings" (maples) or "parachutes" (milkweed) will stay aloft longer and be dispersed farther from the parent. The spores of fungi are smaller and lighter than all plant seeds, but fungi encounter more barriers than plants do in achieving successful dispersal. A major problem is that many fungi do not grow tall enough to clear the "boundary layer" of still air next to the ground. Most plants grow through the boundary layer. Fungi have adapted to the problem posed by the boundary layer by either shooting their spores through it, or evading it entirely by utilizing vectors (animals or water or wind) for dispersal. Once spores are caught by the wind they can be carried very long distances. Spores of a wheat rust have been reported to have been dispersed 1,243 miles (2000 km) by the wind.

The giant puffball is an example of passive spore dispersal by wind. The puffball cracks open to allow the wind to carry away its spores. This is not an energy-efficient way to disperse spores. Giant puffballs produce trillions of spores because the chance of a spore landing in a habitat suitable for germination is extremely small. Passive wind dispersal is sometimes called "sweepstakes dispersal" because its chance of success is so low, just like a lottery or horse race sweepstakes. Another problem with this method is that most of the spores land close to the parent fungus.

The spores of some fungi are dispersed in water or on the surface of water. The chemical composition of the wall of these spores makes them "non-wettable" so they won't sink. The spores are carried along on the surface of the water like little boats. Water in the form of raindrops can disperse spores in a different way. In earthstars and other leathery puffballs, a raindrop depresses the sack containing spores. When the sack rebounds, spores are puffed out. The inelastic spore sack acts like a bellows. "Bird's nest" fungi produce spore-containing "eggs" in a "splash cup". When raindrops hit the cup, its shape causes the spores to be splashed out and away from it.

Truffles are an example of passive dispersal by animals. Truffles are produced below ground, so they have to be unearthed to be dispersed. As truffle spores mature, they develop an aroma which attracts animals, who dig up the truffles for food. The spores are not digested and eventually pass through the animal at some distance from where the truffle was dug up.

Stinkhorns also use an animal vector to disperse spores. Stinkhorn spores are contained in a slime that smells like rotten meat. The odor attracts flies, which become coated with the spore-containing slime as they feed on it, and carry away the spores. Animal vectors greatly improve the chance that a spore will be deposited in a site favorable for germination and growth.

This method allows the fungi that rely on animals for germination to produce fewer spores, because each has a greater chance of success. The spores are deposited as a unit in distant, favorable habitats. The sweepstakes method requires a fungus to produce a huge number of spores, but results in relatively few new fungal organisms, and very little long-range dispersal.

Some cup fungi use a bursting cell to "shoot" spores through the boundary layer. In cup fungi, the spores are contained within a special cell called the ascus. Fungi whose spores are contained in an ascus are known as Ascomycetes. When the spores are mature the ascus absorbs water. Insoluble materials in the cell are converted to soluble materials, causing internal pressure to build. When the pressure is high enough, the spores and the cytoplasm are explosively discharged. Spore release is explosive because of a weak point at the tip of the ascus that ruptures suddenly. The weak point can be a small circular "lid" (operculum) or an elastic ring. Humidity changes cause some cup fungi to discharge large numbers of asci (plural of ascus) all at once, "puffing out" a visible spore cloud. More air turbulence is created by discharging all the spores at once than when a single ascus explodes. The spores have a better chance of escaping the boundary layer and being dispersed farther if the air is turbulent.

The range of spore dispersal depends on size of the projectile. Larger spores, or clumps of spores, are shot farther. Podospora fimicola discharges all 8 of its spores as a single projectile as far as 20 inches (50 cm). Spore release in Pilobolus is also explosive discharge by a bursting cell. Instead of a single spore being discharged, a sticky mass containing many spores is discharged as a single unit. The spore mass shoots away at 35 feet per second (10.8 m per second) to a height of six feet (2 m), and lands as far away as 8 feet (2.5 m) "Rounding off" utilizes the rapid motion that results when the force keeping a deformed surface under stress is suddenly released. Once the stress is removed the surface rapidly regains its shape and catapults any attached objects.

The spore mass of the bird's nest fungus Sphaerobolus sits on a cup. When an inner deformed layer absorbs water the pressure builds until the layer supporting the spore mass suddenly splits away from the lower layer and tries to turn inside out. An audible "pop" can be heard as Sphaerobolus catapults its spore mass to a height of 6 feet (2 m) and up to 13 feet (4 m) away. The spore producing structures mentioned so far in these pages are not the familiar mushrooms. Spore release in mushrooms is not completely understood. Cells called basidia produce spores, which cover the surface of the gills or pores on the underside of a mushroom's cap.

Mushrooms and other fungi that possess basidia are known as Basidiomycetes. The spores are produced on the tips of "pegs" (sterigmata) projecting from the basidia. The spores are off-center (asymmetric) on the pegs. Mycologists have discovered that spores are discharged 0.5 to 1 mm from basidia. A mushroom's discharge range is related to the spacing between its gills or the diameter of its tubes. If the range were greater spores would hit, and perhaps stick to, adjacent gills or the opposite wall of a tube. How the spores are discharged is debated. Theories about spore discharge have included rounding off of the spore base, jet propulsion by liquid, surface tension, explosive discharge of a bubble of gas at the base of the spore, and electrostatic repulsion, where the spore and the cell have the same electric charge and repel each other, like the north poles of two magnets held close together. 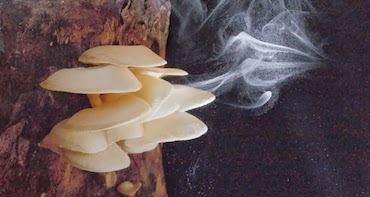 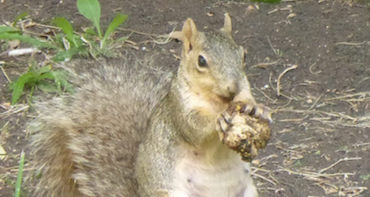 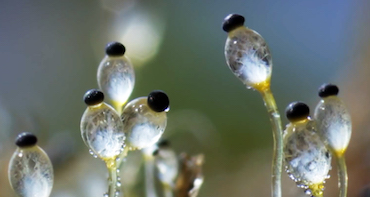