What is a Slime Mold?

A bright yellow slimy blob is commonly seen in the summer on mulched flower beds. It is not pretty, unless you like yellow, and it soon gets uglier. The yellow blob turns gray, becomes hard, then breaks down into a brown powder. People complain that the yellow blob looks like dog vomit and that the brown powder stains sidewalks. The blob is a slime mold called Physarum polycephalum. The brown powder is made up of the millions of spores it makes in order to reproduce. Other slime molds are tiny and difficult to find. Their spore-producing structures are not an ugly crust like Physarum, but rather beautiful colored spheres or popsicle shapes.

Slime molds may be slimy, but they are not molds. Molds are fungi. A century ago, fungi, were defined by what they did not have, or did not do:

Today, organisms in the Kingdom Fungi are defined by: 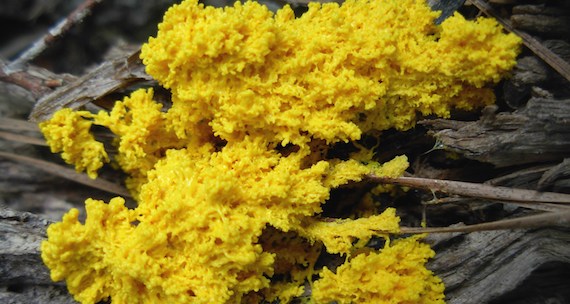 Slime molds move, and lack chitin in their cell walls. They are now classified as belonging to the Kingdom Protista (Protoctista). Mycologists have studied them for so long that slime molds are still included in mycology textbooks. Physarum polycephalum is a plasmodial slime mold. The yellow blob we notice is a huge single cell. Unlike most cells, which have only one nucleus, this cell contains millions of nuclei. Physarum plasmodia are usually 3 or 4 cm ( ½ - 1 " ) in diameter, but can get to be 30 cm (about 1 foot) or more in diameter, and 3 to 5 cm thick. This giant cell moves, but only pictures taken over several days can show its progress. Its top speed is 1 mm per hour. The plasmodium may be ugly to some, but it is not harmful. Slime molds cause very little damage. The plasmodium ingests bacteria, fungal spores, and maybe other smaller protozoa.

Their ingestion of food is one reason slime molds are not considered to be fungi. Fungi produce enzymes that break down organic matter into chemicals that are absorbed through their cell walls, not ingested. One fascinating thing about plasmodial slime molds is that the millions of nuclei in a single plasmodium all divide at the same time. This makes slime molds ideal tools for scientists studying mitosis, the process of nuclear division. If the plasmodium is not stressed by its environment, it will produce a stalked reproductive structure that looks like a sphere or is popsicle-shaped. These structures contain the spores. The spores are usually spherical with a thick wall that may be smooth or ornamented with pits, spines or warts. Spores are extremely resistant to unfavorable growing conditions. Some spores can stay dormant for 75 years and then germinate.

If the plasmodium begins to dry out too quickly or is starved, it forms a survival structure called a sclerotium. This hard-walled mass protects the dormant cells inside until better conditions for growth return. Inside the sclerotium, the plasmodium divides into "cells", each containing from 0 - 4 nuclei. The cell-like structures which contain nuclei can grow into new plasmodia when moisture and temperature conditions improve. Cellular slime molds, the second major group of slime molds, exist as minute "slugs" during their growth phase. Each slug contains a single nucleus. The slugs crawl through dung, soil, rotting mushrooms, decaying leaves and other organic material at an average speed of 1 mm per hour. When conditions are right, all the slugs in an area join together to create a pseudoplasmodium, a "fake plasmodium".

Scientists once thought that the signal that caused the slugs to aggregate was issued by a few "leader" slugs. Recent research has shown that there are no leaders. Each slug pumps out a chemical that leaves an invisible trail. When other slugs cross the path of this trail they follow it, strenthening the chemical trail by adding to it. Even more slugs are attracted by the stronger concentration of the chemical. Eventually all of the slugs in an area gather themselves into a pseudoplasmodium. Then, as part of preparing to reproduce, they stop eating. The plasmodium is "fake" because each slug in it remains an individual even though they become glued together into a larger mass. As a single mass, they act together to produce a single stalked spore-producing structure. About a third of the slugs in in the pseudoplasmodium become the stalk. The other slugs are transformed into spores. The spore walls are smooth and contain cellulose, which is found in the cell walls of plants, but not fungi.

Mathematical equations written to explain the process of slime mold aggregation have been changed slightly and used in the programming that controls some of the behavior of action figures in video games. The original equations were developed by two scientists, Mitch Resnick and Evelyn Fox Keller, at the Massachusetts Institute of Technology. Their equations have also become the basis of the program StarLogo. StarLogo mimics the activities of groups such as ant colonies and flocks of birds. Like the aggregation of cellular slime molds, these organisms' orderly patterns of activity occur without the direction of a leader. Studying patterns and events with the aid of computer software is called "modeling".