We cannot survive without the plants that feed and clothe us. Crops planted closely together in fields allow the rapid spread of diseases and harmful insects. Pesticides keep these organisms from destroying our crops. Chemical pesticides are most often used for controlling pests, but biological control (biocontrol) is less expensive and does not put any man-made chemicals into ecosystems. Biocontrol is the use of one living organism to kill or control another. Biocontrol artificially creates a disease epidemic that spreads rapidly but targets only harmful organisms. For example, an effective biocontrol of a plant disease would quickly kill the disease-causing organism without harming the plant. The biocontrol organism would die off when its target was eliminated.

The species used for biocontrol are often parasites. Fungi that parasitize insects are a valuable weapon for biocontrol. Usually, the spores of a parasitic fungus are sprayed on the pest insects. The fungal attack takes place in three stages: entry into the host, growth, and spore production by the mature fungus. The picture on this page shows the spore producing structure of Cordyceps australis sprouting from the corpse of its host, an ant. In 1834, the Italian scientist Bassi found that an entomogenous fungus was killing valuable populations of silkworms. Now, years later, spores of this same fungus are being used as a mycoinsecticide to control Colorado potato beetles. The spores of at least a half-dozen other fungi are being used to control spittlebugs, leaf hoppers, citrus rust mites and other insect pests. Fungi are also used as biocontrols for other species of fungi which cause root diseases and plant rusts. The mycoherbicide Devine® contains the spores of a fungus that controls weeds. Many more species of fungi are waiting to be discovered and tested for their use in biocontrol. 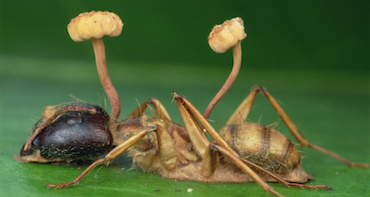 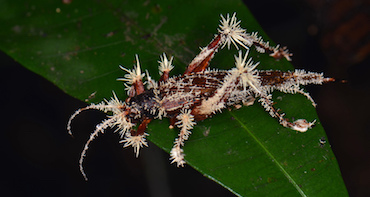 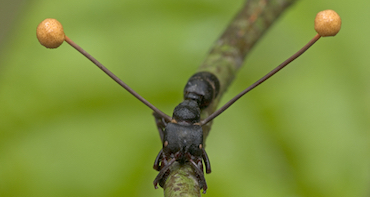