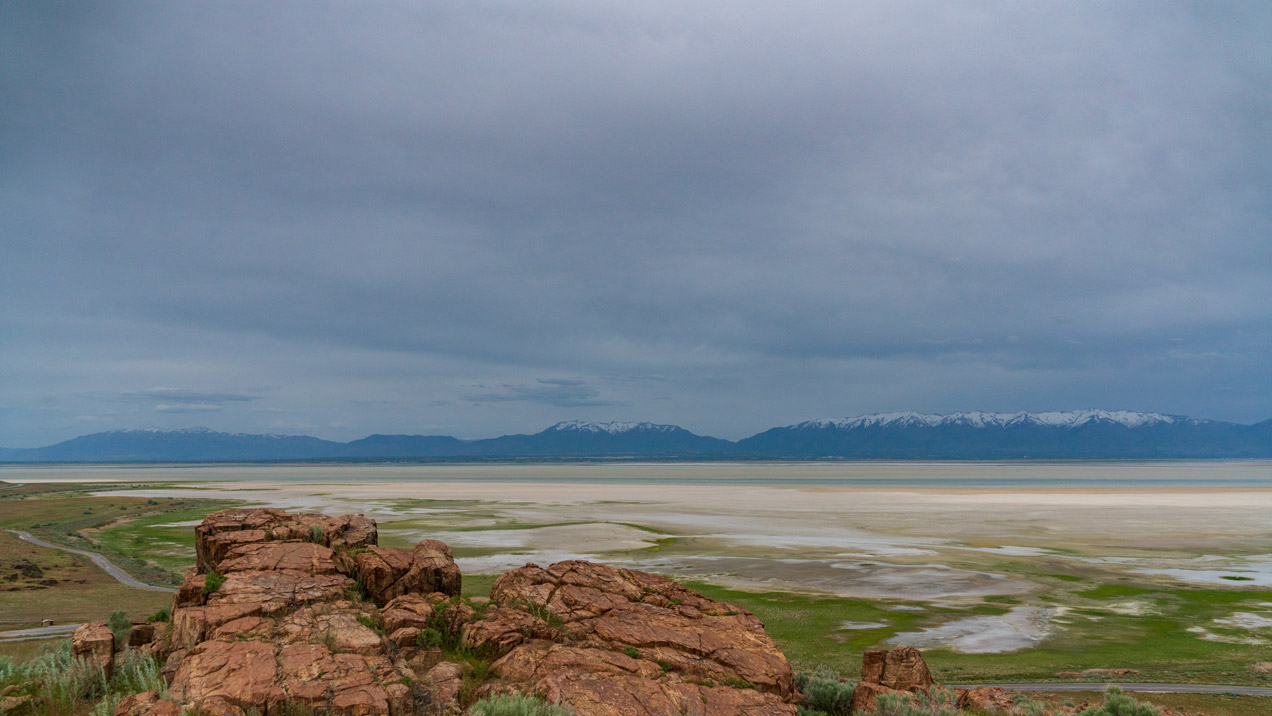 It may be said that many of Utah’s air quality issues are the result of a near perfect storm of emissions, topography, and meteorology. The latter two are not controllable, but with proper understanding of the interaction among all three factors, progress can be made. With plans developed and implemented by state and local agencies and communities, several airsheds have been brought back into compliance. Unfortunately, several Utah airsheds remain in non-attainment status, exceeding federal compliance regulations for various pollutants.

Air pollutants have an undeniably profound effect on illness and death. They are indiscriminately inhaled, can travel through the bloodstream, and can interact with multiple organs, including the heart, arteries, lungs, and brain. Scientific evidence strongly shows the positive health and economic impacts of reducing ambient levels of fine particulate matter, ozone, nitrogen dioxide, and other pollutants to and below concentrations defined by the National Ambient Air Quality Standards (NAAQS). While statewide efforts have improved Utah’s air since the enactment of the Clean Air Act, several of Utah’s airsheds continue to face challenges meeting the current NAAQS.

Although PM2.5 remains an ongoing and complex problem, Utah has demonstrated an ability to reduce wintertime PM2.5 in Cache Valley and with additional research and effort can effectively address challenges along the Wasatch Front.

PM2.5 is Utah’s primary wintertime haze-causing pollutant along the Wasatch Front and Cache Valley. The small size range of PM2.5 (fine particulate matter) is concerning because it can penetrate the deepest layers of the human respiratory system and cause negative health effects. Through several years of research, public action, and regulatory programs, PM2.5 reduction programs are somewhat a success story. As can be seen in Figure 1, there has been a general decrease in northern Utah’s PM2.5, particularly since 2013, when implementation plans were put into place.

Success of Utah’s PM2.5 program has been significantly influenced by numerous research programs involving federal and state agencies and most of Utah’s major universities. It is now well established that the bulk of the PM2.5 mass in northern Utah is not directly emitted, but rather is formed in the atmosphere from various precursor compounds, with the dominant resultant compound being ammonium nitrate (NH4NO3).

The main issues moving forward with Utah’s PM2.5 management is that now, and at least for the next 10-20 years, the state must maintain attainment status where it has been achieved, and demonstrate that plans now implemented will control PM2.5 from this point forward. With Utah’s continued growth, mostly in metropolitan areas, this could be a challenge, and will require further understanding into other potential proactive minimization strategies. 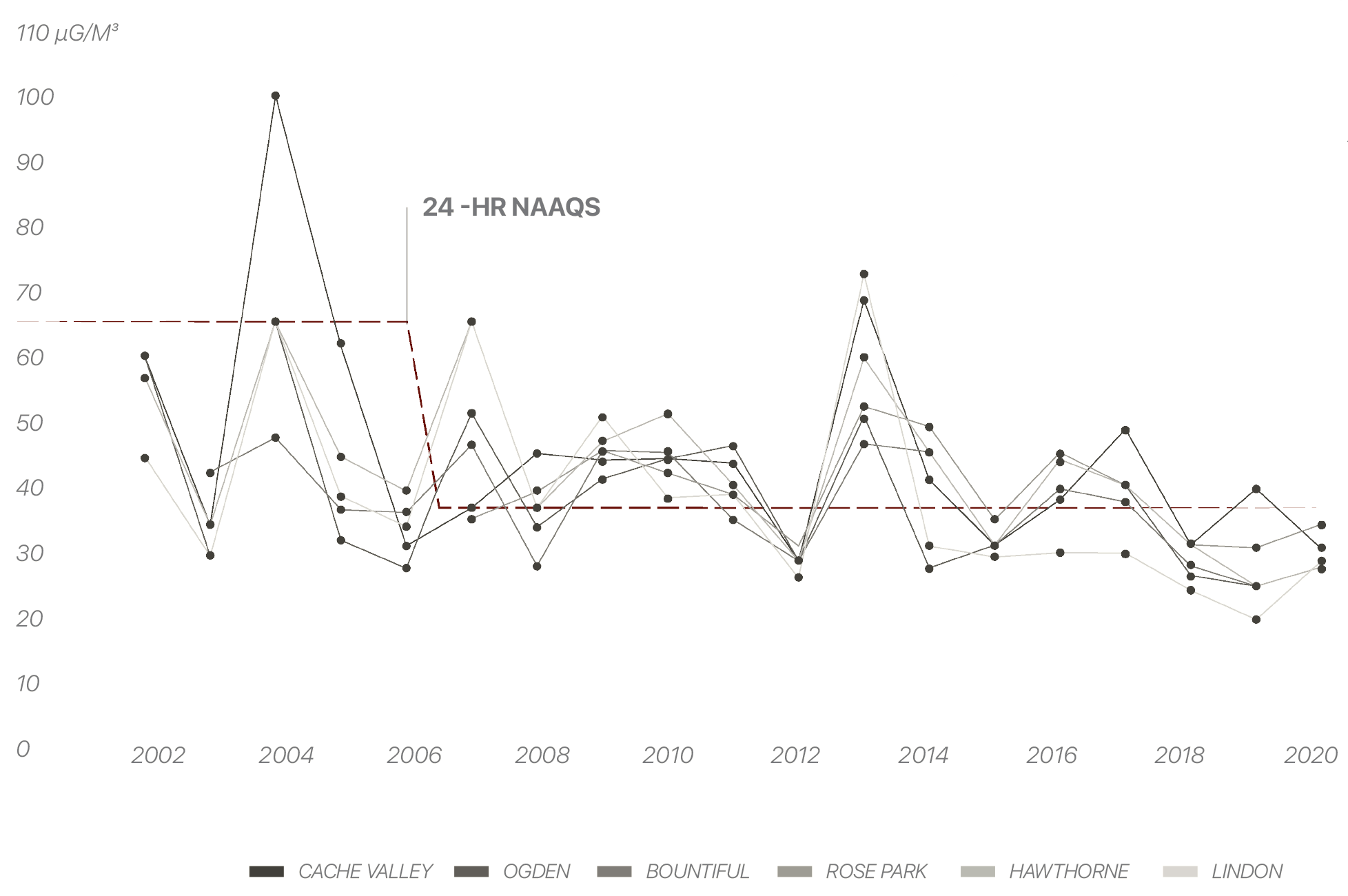 Effectively reducing Utah’s ozone will be a challenge, given many present uncertainties. However, Utah has shown that success is possible. Ozone is likely to be the most difficult pollutant to remediate in the near term.

Ozone is formed in the atmosphere through photochemical reactions involving oxides of nitrogen (NOx), hydrocarbons or volatile organic compounds (HCs or VOCs), and sunlight. Much like Utah’s PM2.5 issues, ozone formation can be exacerbated during inversion episodes and when there is increased reflected sunlight off snow-covered ground. Ground-level ozone is a wintertime problem in the Uinta Basin and a summertime problem along the Wasatch Front. Both regions are in non-attainment, and state implementation plans (SIPs) are being developed to mitigate the problem. Figures 2 and 3 show recent ozone trends at sites along the Wasatch Front and from the Uinta Basin.

Several intense and on-going studies in the Uinta Basin have helped to determine the causes and possible ozone remediation scenarios in this region. While these studies have greatly aided in understanding the unique situation of excess wintertime ozone formation, more work needs to be done. Additional studies are particularly needed in source attribution and identifying different types of VOCs associated with the oil and gas industry, as drilling and production has recently increased approximately five-fold, resulting in commensurate increases in NOx and VOCs in the past decade.

Summertime ozone along the Wasatch Front is a similar, but separate, beast. As previously indicated, more research needs to be done to understand the detailed photochemistry involved. 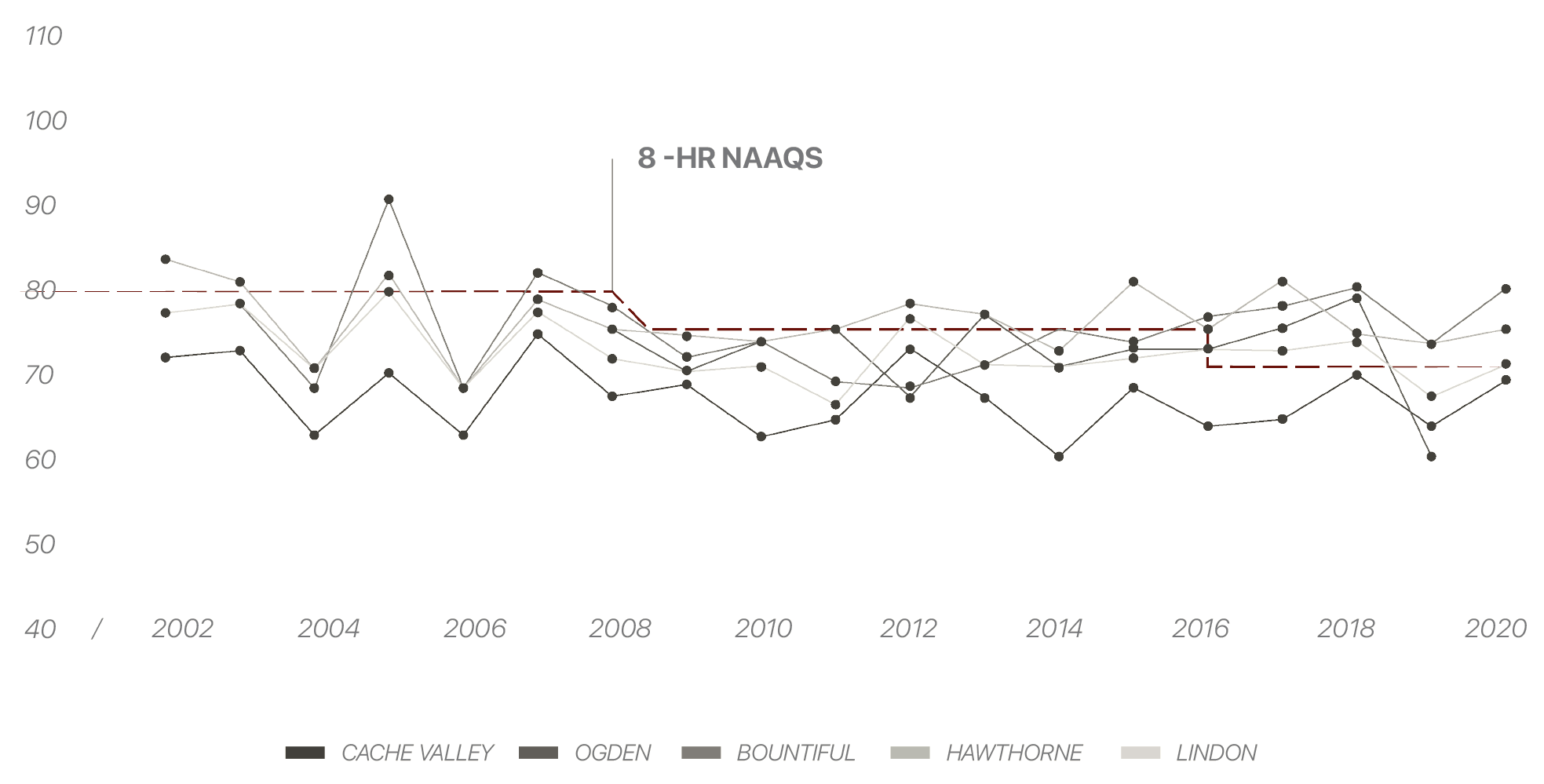 Utah’s climate is shifting in an observable fashion. These changes are likely to have a significant impact on air pollution across the state.

Local weather, as defined by short-term meteorology and long-term climatology, is the third leg of the tripod that dictates most of Utah’s air quality issues – the other two being pollutant emissions and trapping topography. Higher concentrations of Utah’s two key pollutants, PM2.5 and ozone, typically occur during inversions. The ability to confidently predict the formation and duration of inversions — in both short- and long-term periods — would greatly aid in the success of remediation efforts. Utah has experienced long-term weather shifts, and these should be noted when trying to model or predict future air quality scenarios, as well as other environmental concerns. Specific to Utah, climatological changes have been documented by the Utah Climate Center. This includes the annual average temperatures rising more than 2.5°F since the beginning of the 20th century. Warming in Utah is particularly evident in the increase of very warm nights and a below-average occurrence of very cold nights over the past three decades.

The ability to confidently predict inversions has to include potential impacts of global climate change for winter and summer pollutant photochemistry and buildup. In broad terms, warmer winters with less snow cover would lead to conditions less favorable to inversion formation and pollutant buildup. This could benefit the Wasatch Front and the Uinta Basin in terms of wintertime PM2.5 and ozone, respectively. However, hotter and dryer summers would likely enhance the summer formation of local ozone, thereby exacerbating an already significant issue. As such, potential climate change cannot be ignored when considering Utah’s future air pollution scenarios.

Other pollutants and sources may create additional problems for Utah’s air quality.

The quality of Utah’s air faces challenges from various and emerging pollutants. For example, Utah has the nation’s largest emissions of hazardous air pollutants, which are linked to cancer and birth defects in human health studies. Presently unaccounted-for emissions of chlorine and bromine compounds from industrial sources may significantly contribute to local ozone and PM2.5 photochemistry. Dust from the drying bed of the Great Salt Lake is becoming an increasing concern, as changes occur in our climate and water resources. Wildfires within the state and the effects of wildfire from outside our borders have been documented as creating local air pollutant issues. Utah’s natural geology also increases the population’s risk for exposure to radon, a radioactive gas that causes lung cancer in both nonsmokers and smokers. Another area of growing concern is the impact on communities of differing economic and social characteristics.

Utah will see increasing emissions in relation to the development of the Utah Inland Port west and southwest of the Salt Lake City International Airport, due to increased industrial activities and mobile source emissions. Vehicle miles traveled (VMTs) estimates have high uncertainties, making it very difficult to develop robust implementation and maintenance plans for PM2.5 and ozone. The Utah Division of Air Quality and the Utah State Legislature have recognized the potential air quality impacts of future development and have established two new monitoring stations in the area to begin collection of baseline air quality measurements before significant future development.

Utah will benefit from continuing to support and fund relevant and forward-looking research in order to monitor and plan for emergent issues. This allows the state and its major universities to lead out in these areas of research and directly contribute to understanding and remediation of local and regional air pollutant issues, as well as their impacts on the Utah citizens.

WHAT’S NEXT FOR UTAH’S AIR

Utah has significant air quality challenges, and the impact of poor air quality on Utahns’ health and economy are incontrovertible. While the costs and efforts to obtain and maintain acceptable air quality for Utah’s population are not negligible, the actual and perceived benefits far outweigh the costs. Through federal, state, and community

cooperation, Utah has shown a capacity to achieve significant reduction in ambient pollutants, as has been demonstrated by the removal of several areas from non-attainment status. We believe that continued cooperation and investment in Utah’s air quality will benefit the health and properity of all.