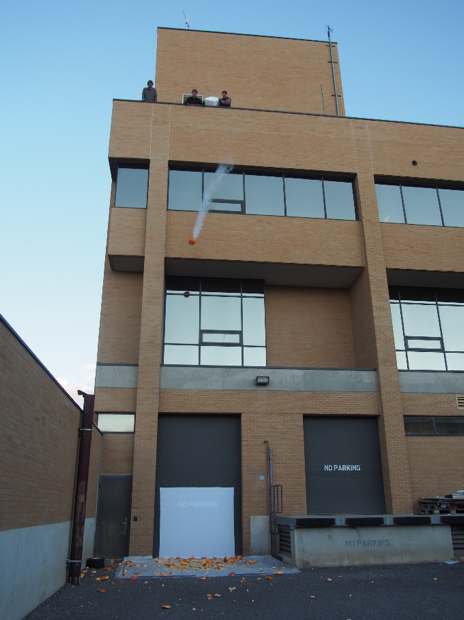 October 30, 2018. Utah State University Physics Graduate Students carved pumpkins and then took them to the roof of the SER building to freeze them in liquid nitrogen and toss them over the edge. Graduate students Zach Gibson and Eric Davis dropped both frozen and non-frozen pumkins, while Neal Criddle and Ivana Molina manned the high-speed camera on the ground. This allowed a comparison of frozen/unfrozen pumpkins as they impact the ground. Zack Gibson said, "We can calculate the acceleration due to gravity, and now confirm that it is the same for frozen and unfrozen pumpkins."

Other physics that can be studied with the footage include conservation of momentum (comparing and contrasting the impacts of the frozen/unfrozen pumpkins and the resulting shrapnel), wind speed/drag (looking at gaseous nitrogen during the falls and lateral movement of the pumpkins during free fall), etc. The students also observed that the pumpkins, after frozen, would crack and form frost when pulled from the liquid nitrogen bath and exposed to air thanks to good ‘ole thermodynamics.