How to Use Breakout Rooms in Zoom

Zoom allows you to break the students into smaller groups. You will have the option to generate the rooms automatically (participants randomly assigned) or manually (you assign participants to the groups). Here is a short video about how to utilize the breakout rooms.

When in a meeting, begin breakout rooms by selecting the Breakout Rooms icon at the bottom of the screen.

Once selected, a pop-up will appear asking how many rooms you want to create. You will also choose if you want all of the participants distributed randomly (and evenly) among the rooms, if you want to manually assign people to each group, or if you want to allow participants to choose their own rooms. Once finalized, select Create. 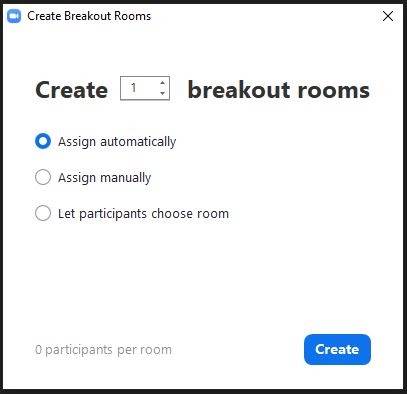 After creating the rooms, you will see all of the participants in their assigned groups. You can move participants between the rooms and rename the groups. To begin breakout rooms, select Open All Rooms.

As the host, you will remain in the main meeting room while everyone else is split off. You can open the Breakout Rooms window again and move between the groups by selecting the blue Join button next to each room's title. You can also move participants to different rooms by hovering over their names and selecting which room you want them in.

Note: If you want to send a message to the entire group, Broadcast a message to all is a feature that will allow you to type a message to be sent to all of the groups. Find this at the bottom of the Breakout Rooms window.

If you want to send a message to the entire group, Broadcast a message to all is a feature that will allow you to type a message to be sent to all of the groups. Find this at the bottom of the Breakout Rooms window.

Within the Breakout Rooms page, select the Close All Rooms on the bottom right to have participants return to the main meeting.

Group assignments can be done automatically or manually. You can reuse groups that have been previously created automatically.

You can use set-up up to 50 breakout rooms.

As the host, you can join one breakout room at a time. If you want to monitor students' progress across all rooms, set up a Google Doc that all students can edit and ask students to make notes as they work with their groups. You can see the progress of all the groups on a single document. Share the link to the Google Doc in the chat and have students open it before breaking them out into groups because they won't have access to the main room chat when they are in their groups.

If you don't want groups to know what the other groups are discussing you can share a Google Doc with each group and open multiple windows to monitor their progress.

Cloud recordings will not record breakout rooms. If you need breakout rooms recorded, you will need to give access to another participant to record by hovering over their name in the Participants panel. They can then record their breakout room as an MP4 file onto their device.