LOGAN, Utah — A veterinarian, researcher, author, teacher and administrator, Francis D. Galey has announced his retirement, effective June 30, 2022. For the past four years, Galey has served as Utah State University’s executive vice president and provost, a position he began Aug. 1, 2018, taking over for then-recently appointed President Noelle E. Cockett, who was named university president in 2017.

“We are so grateful for the countless hours Frank Galey has spent in the service of our students, faculty and staff at Utah State University,” President Cockett said. “He has left an indelible mark on our university, and we cannot thank him enough for all he has done in the final chapter of his distinguished career. We wish him and his wife, Donna, all the best as they enjoy retirement.”

Galey graduated with his bachelor’s degree in 1981 from Colorado State University and earned his Doctor of Veterinary Medicine degree from CSU in 1983. He would go on to earn a Ph.D. in veterinary biosciences in 1988 from the University of Illinois Urbana-Champaign.

In 1999, Galey accepted the position as professor and head of the Department of Veterinary Science at the University of Wyoming, and in 2001, he was named the dean of the College of Agriculture and Natural Resources, where he served until becoming executive vice president and provost at USU in 2018.

“I’m a land-grant rat,” Galey said. “My entire career has been at land-grant universities. These universities give students and faculty the ability to do high-quality research and to link that research to the community. Utah State University has a great model for doing that.”

During his tenure, Galey sought to improve both the academic experience for students and also streamline communication with faculty and help develop and promote faculty and department heads. Galey is proud of how his office worked with faculty and department heads to provide tools to assess and revamp curricula and address student success rates in various gateway classes. He is also proud of how these improvements were made available not only to the Logan campus but to all statewide faculty.

“During the last four years, we’ve worked very hard at connecting statewide faculty members with their home departments and ingraining them to their departments and colleges,” Galey said. “We are truly now one academic university. This focus on state and community, and not one campus, is a key part of our mission.”

Colleagues of Galey have praised his leadership and work, especially helping lead USU through the unprecedented challenge of the COVID-19 pandemic.

“Provost Galey’s collegial leadership style has been instrumental to USU’s ability to thrive over the last four years,” said Joseph Ward, dean of the College of Humanities and Social Sciences. “The responsibilities of the executive vice president and provost are inherently immense, but the challenges we faced during the COVID-19 pandemic were especially demanding. I am deeply grateful for Provost Galey’s outstanding work during a very difficult time.”

Galey is also proud of how USU has continued achieving its land-grant mission and the national recognition the university has received. In 2020, the university earned the Carnegie Classification for Community Engagement, and in 2021, USU attained the Carnegie R1 Classification of Institutions of Higher Education, proof that USU is a national leader in research and graduate education.

“We have worked to find ways to connect departments with the people of Utah and the important research that we need to do,” Galey said. “My focus was on that academic mission and creating success not only in Logan but across our entire statewide system. Our faculty focus on student experience and on linking students to opportunities in the state.”

Looking back at his tenure, Galey said he hopes his legacy is all the things the university has done to move the needle in academic excellence. While there were unforeseen challenges that popped up along the way, he feels his time at USU was a success.

“We couldn’t predict the pandemic, but my time at Utah State University has gone as I would have hoped,” he said. “We have improved and maintained great links with our department heads and faculty and staff. We doubled down on our whole academic mission. We made great strides in inquiring about our curriculum and streamlining some of our general education. In doing that, hopefully we can improve the experience for both faculty and students. Working with our faculty has been a delight.”

Galey is now excited to enter the next stage of life. While he looks forward to USU opening its College of Veterinary Medicine and other accomplishments that are on the horizon, Galey says the thing he and his wife will miss most are the students and their enthusiasm and energy.

“The biggest thing we will miss is the amazing Aggie pride, that thriving attitude,” Galey said. “There is so much energy at Utah State University, and I will miss that energy. We’ve had a great run, but it’s time to retire and check some things off the bucket list.”

Galey’s role will now be split into two different positions. Larry Smith will take on the role as university provost, while Robert Wagner has been named as the university’s executive vice president. Both will assume their roles on July 1, 2022. 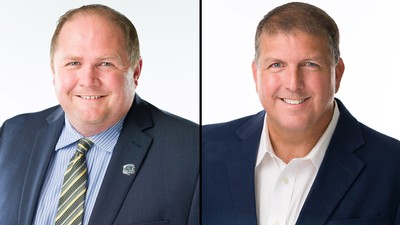