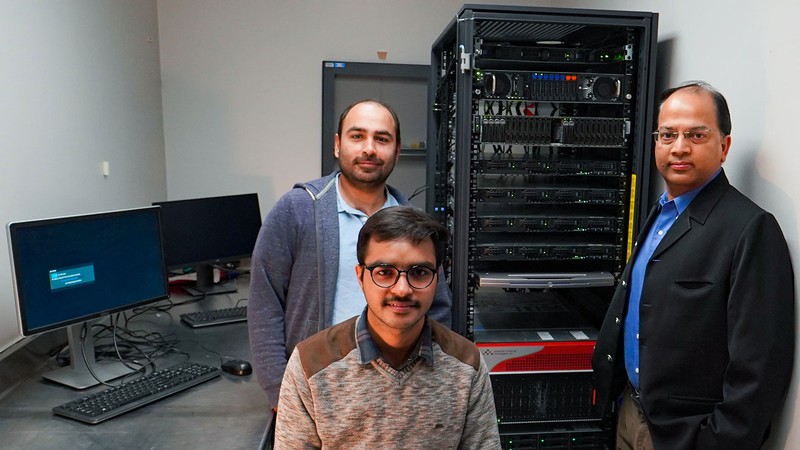 Researchers Naveen Duhan, Raghav Kataria and Rakesh Kaundal pose for a photo in front of a server stack at the Center for Integrated BioSystems. 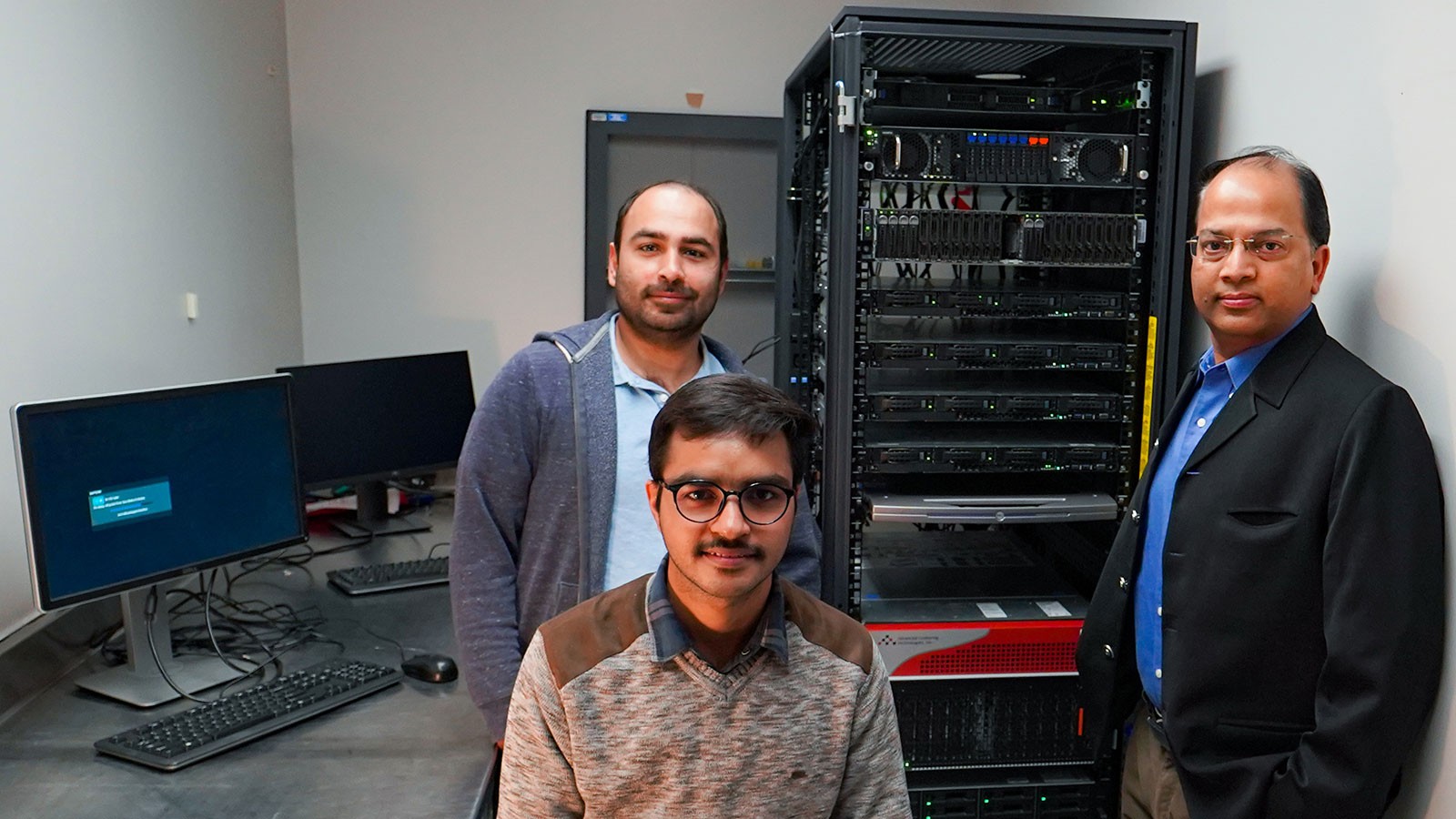 Imagine you are a scientist studying how the genetics of wheat and a particular fungus interact. The fungus has maybe 5,000 genes. The wheat might have more than 50,000 — 10 times the number of the fungus. But to understand the relationship between pathogen and plant, you need to look at how the fungus and wheat genes affect each other.

Until recently, explained Utah State University Assistant Professor Rakesh Kaundal, that sort of research would have been more than a little time-consuming.

“To find the function of those interactions,” Kaundal explained, “it would take a thousand years or even more to do experiments one by one.”

Kaundal — not to mention other scientists — did not have a millennium to spare.

Instead, he taught himself computer programming and earned a postdoctoral degree in bioinformatics on top of his doctorate in plant breeding and genetics. In doing so, he joined a growing number of scientists and engineers who use big data to push the very scope of what human beings are capable of studying.

As a member of the Department of Plants, Soils and Climate faculty and director of the Utah State University Bioinformatics Facility, Kaundal has been instrumental in bringing high-performance computing (HPC) to USU. With money from grants and other sources, he secured a graphical processing unit (GPU) node for students and faculty alike to use in their research.

“It’s almost 500 times faster than central processing unit-based HPC,” Kaundal said. “The machine-learning algorithm my students use for training and testing used to run for one month, two months, even more. With a GPU, it can finish in three days.”

With the ability to process larger amounts of data in record time, researchers are better able to understand whatever subject they choose to study. Sifting through such large amounts of information allows them to spot patterns and relationships that simply wouldn’t be apparent at a smaller scale.

“The mission is how to get from information to inference,” he explained.

The work done at the USU Bioinformatics Facility, also known as the Kaundal Artificial Intelligence and Advanced Bioinformatics Lab (KAABiL), has far-reaching implications. Kaundal and other USU researchers are applying HPC to infectious diseases, plant and animal genetics, soil microbiomes, subcellular functions, and above all, developing more efficient databases and algorithms so that other researchers can better catalogue and understand data.

In other fields, the use of algorithms and big data has led to everything from more efficient spam folders to the camera technology in Tesla self-driving cars to the rapid genetic sequencing that created the COVID-19 vaccines. Likewise, the work at KAABiL is leading to concrete advances in science and technology. From drones that can weed fields without human supervision to developing salinity-resistant plants needed to combat world hunger, the future will look very different in part because of data science.

And while computing power can outpace human capabilities, the work at KAABiL is not done in isolation. While Kaundal is a major force in the lab — his work has been cited almost 600 times and has appeared in publications including Briefings in Bioinformatics, Scientific Reports, the International Journal of Molecular Sciences, and more — both he and his lab group are firm believers in the power of teamwork in science. Kaundal has collaborated on more than 30 projects, including four with United States Department of Agriculture labs and several with outside universities, industry scientists, and international colleagues. The KAABiL website is home to a collection of university-produced software that other researchers can access for free.

When asked what students and others interested in bioinformatics should do to prepare themselves, Kaundal mentioned the importance of learning a computer language, studying biology, practicing public speaking and learning to work with people from diverse fields and backgrounds. But he also doubled down on the importance of contributing to the greater good of science and society as a whole.

“My advice to students is to think more broadly about how you can serve science or humanity in general,” Kaundal said. “That is true for every discipline. We are not working for ourselves. That's why we are in academia.”

Researchers like Kaundal aim to make their mathematical models 100 percent accurate in sorting data. In many fields, nothing less than that kind of precision will suffice. But Kaundal never forgets why his work matters in the first place.

“The major goal,” he said, “is to give back to the community.” 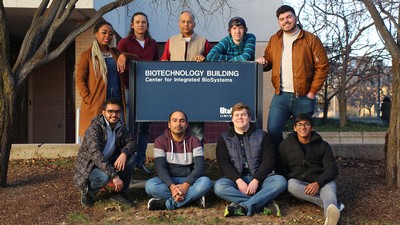 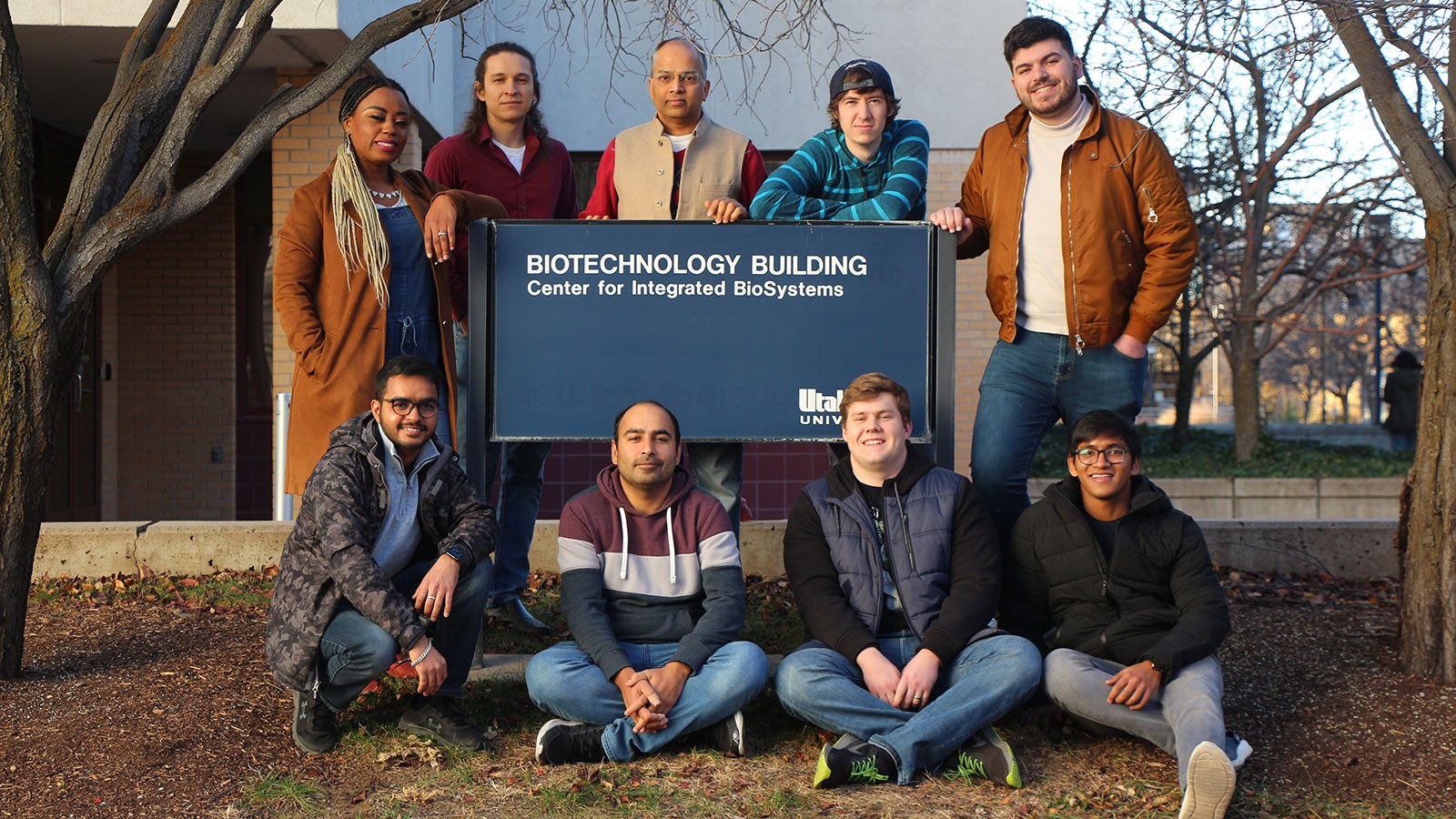 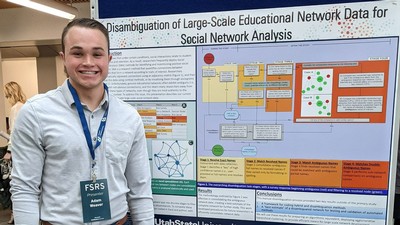