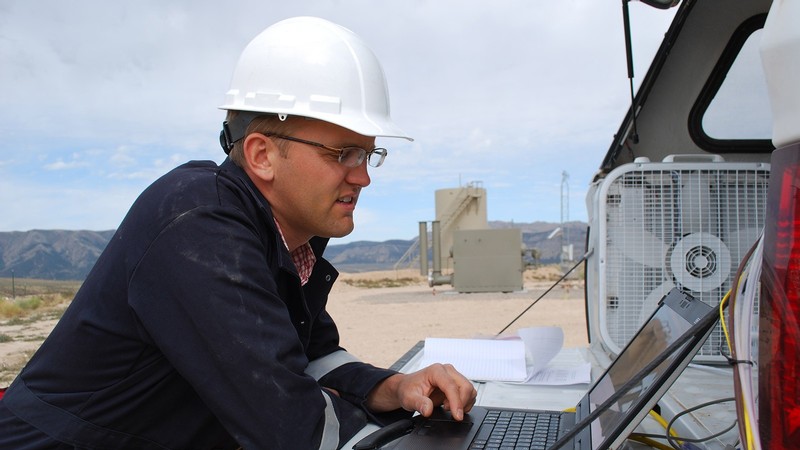 Researchers in Utah's Uinta Basin have been monitoring methane emissions and leaks from wells and other oil and gas infrastructure in the region for several years and have recently published their findings in the international scientific journal Nature. Since 2015 researchers, including USU research associate professor Seth Lyman (pictured here), have been tracking emissions and report that, over that time, emissions from the region have fallen by half. But that’s not the whole story. 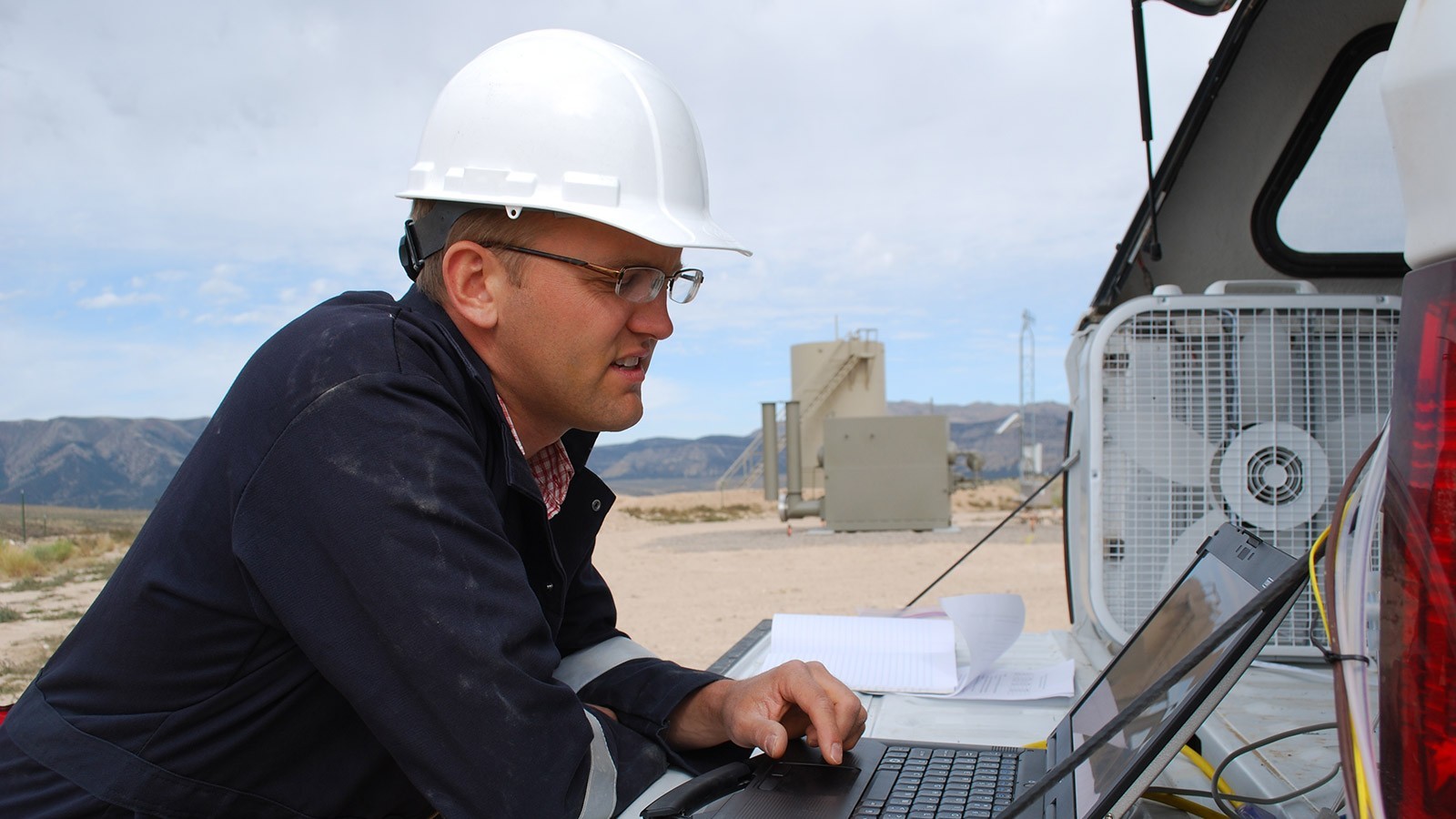 But That’s Not the Whole Story

As important as emissions of the greenhouse gas methane are in the climate conversation, factoring prominently in the recent COP26 conference in Glasgow, researchers have painfully little long-term data on emissions from wells and other oil and gas infrastructure. That makes answering questions about the sources and magnitudes of emissions, as well as year-to-year trends across an entire production region, difficult.

Answers are starting to come from Utah’s Uinta Basin, home to possibly the longest continuous methane monitoring site in an oil and gas-producing region. Since 2015, researchers have been tracking emissions from oil and gas wells and report that, over that time, emissions from the region have fallen by half.

But more analysis of leak rates shows that the oil and gas industry has a ways to go in stopping methane leaks, which impact the climate and human health and can impose costs on Utah’s economy.

“Our work in the Uinta Basin shows that the methane emissions can change over multiple years,” says professor John Lin, of the University of Utah Department of Atmospheric Sciences, “and it is important to bring a long-term perspective and monitor these emissions over multiple years as well.”

“The earth has only one atmosphere,” says research associate professor Seth Lyman, director of the Bingham Research Center at Utah State University’s Uintah Basin campus, “and emissions in one area can impact air quality and climate across the globe. Oil and natural gas facilities are not evenly distributed around the state or around the world, but climate impacts from fossil fuels are not dependent on the location of emissions.”

The study is published in Scientific Reports and is funded by the National Oceanic and Atmospheric Administration (NOAA) and a subcontract from the University of Arizona.

Monitoring in the Uinta Basin

Methane is a potent greenhouse gas, with around 85 times more global warming potential than carbon dioxide over the first 20 years it’s in the atmosphere. Methane has a tremendous potential to absorb infrared energy, which it then re-directs back to the Earth’s surface, thereby trapping the heat and warming the planet.

Methane is the “gas” part of oil and gas production. Because it’s hard to keep every component of the gas production process airtight, methane can leak from wells, pipelines—anywhere along the way.

It can also react in the atmosphere to form ozone, which is where Lin and his colleagues from the University of Utah, Utah State University and West Texas A&M University come into the story. In the early 2010s, researchers were studying high levels of wintertime ozone pollution in the Uinta Basin. One study involved flying an aircraft-based sensor over the basin, home to around 10,000 oil and gas wells. Aircraft-based measurements are good, but they’re only a snapshot of a moment in time.

“I wanted to compare estimates from ground-based observations against the aircraft estimates and see how the emissions change over multiple years,” Lin says.

In 2015, with funding from NOAA, the team installed the first of what would become three sensors in the basin. It was good timing—after years of booming oil and gas production, oil prices began to fluctuate and fell off by the 2020s, affecting production in the region and giving the researchers a glimpse into how economic forces and methane emissions were related.

How and why emissions fell

Between 2015 and 2020, the researchers observed, methane emissions in the Uinta Basin approximately halved. Natural gas production also fell to around half of its peak, as fossil fuel prices collapsed after 2014. This initial result is good news—less methane in the air is good for the climate and for human health.

But the researchers also noted that the amount of methane still leaking from the remaining wells in 2020 was about six to eight percent of the produced natural gas, about the same as it was in 2015.

“This means that the leak rate has stayed at a constant—albeit high—rate, even with decreases in natural gas production,” Lin says. This result was surprising because previous research had suggested that lower-production wells would leak a higher proportion of methane. “This may account for the high leak rate in general in the Uinta Basin since the average Uinta well produces less gas compared to many other counterparts around the U.S.,” he says. “However, it was nonetheless surprising that the leak rate did not increase as the Uinta wells decreased in production.”

The researchers ruled out regulation as contributing to the emissions decline since Environmental Protection Agency regulations in the past few years applied only to new wells. Surveys of some of the companies in the Uinta Basin did show that one company voluntarily took action to detect and repair leaks, but the extent of such voluntary action is unknown.

What methane leaks cost us

“This will depend on decisions made by individual companies, as well as on changes that have occurred or that may occur in the regulatory landscape,” says Lyman.

Just as economic forces impacted oil and gas production and methane emissions in recent years, continued leaks can impose their own expenses, particularly on Utah’s economy. Lyman says that the majority of crude oil processed in Utah’s refineries comes from the Uinta Basin. Beyond the climate implications, leaking methane is wasted energy (about three to five percent of all energy produced in the basin, the study estimates), which increases costs for companies.

Also, leaking methane impacts Uinta Basin air quality. “Besides the obvious (and more important) health impacts to residents of the Basin, air quality problems lead to increased regulation of oil and gas development, which increases costs, and those costs are passed on to consumers,” Lyman says.

Hopefully, this study inspires other oil and gas regions in the U.S. and around the world to conduct their own continuous monitoring, says Erik Crosman, assistant professor at West Texas A&M University. “We need a more detailed understanding of how methane emissions are evolving,” he says, “and observations like those we conducted in the Uinta Basin help toward filling in those gaps.”

Ryan Bares, Benjamin Fasoli and Maria Garcia, all of the U’s Department of Atmospheric Sciences, were also co-authors on the study.

Utah State Today publishes this press release in conjunction with University of Utah Marketing & Communications, which is the author of this release. No changes to the original release have been made. To view the U’s release in its entirety, click HERE. 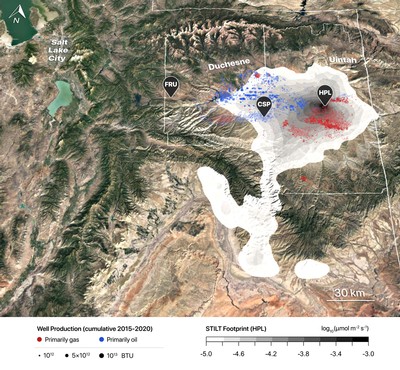 Map of the Uinta Basin in eastern Utah, methanols observational sites, and oil/gas wells. Observational sites include Horsepool (HPL), Castlepeak (CSP), and Fruitland (FRU). The grayscale is the atmospheric footprint of the HPL site as simulated by the HRRR-STILT transport model. Satellite imagery from Google Earth. (Courtesy: U of U Marketing & Communications) 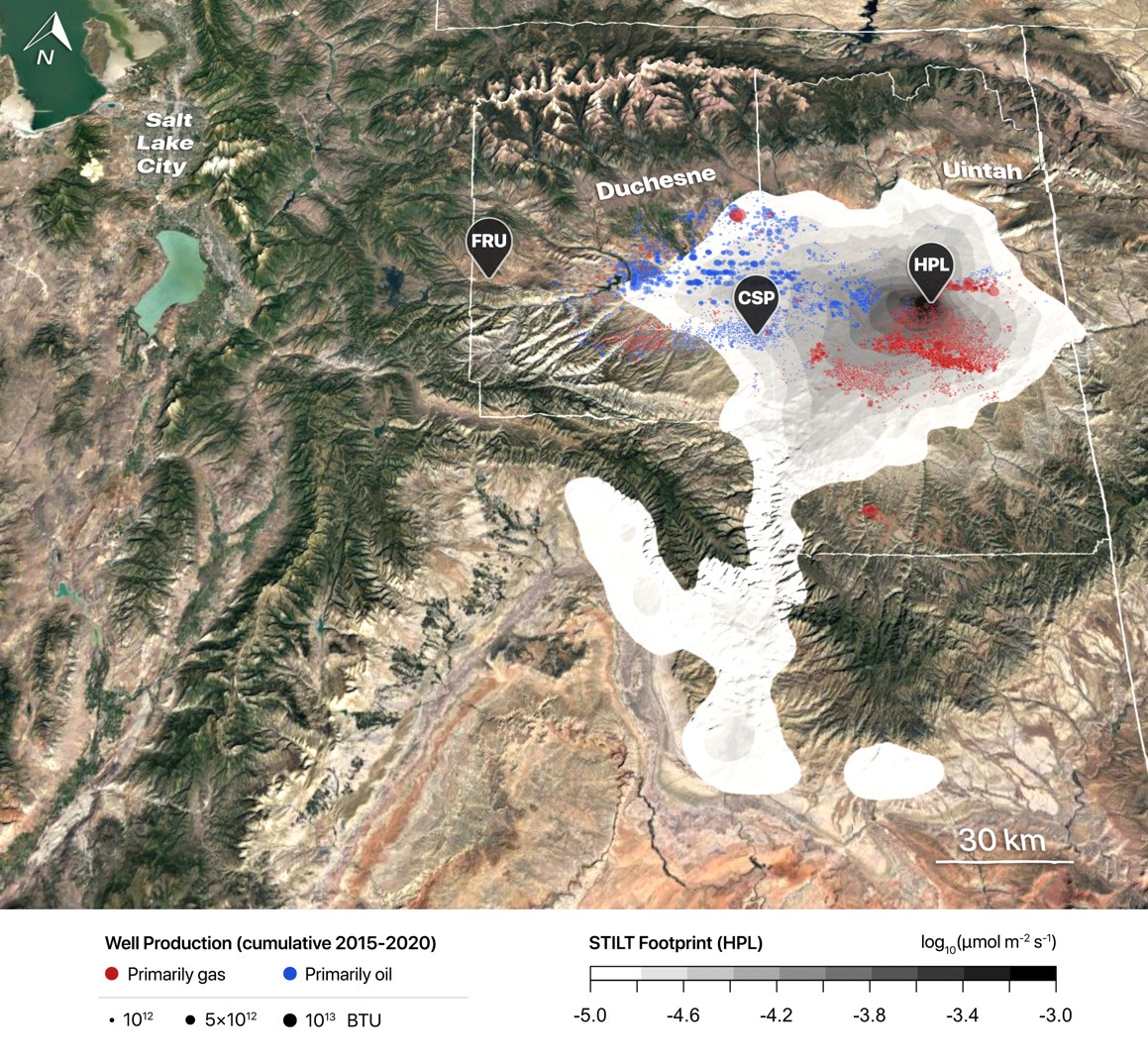 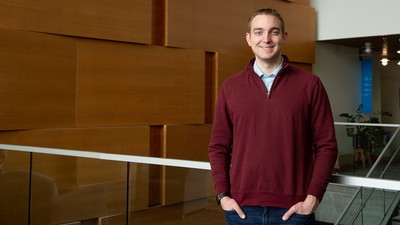 Utah State University's Get Away Special Team CubeSat successfully deployed Jan. 26 from the International Space Station. It's alive, well and communicating with Earth.