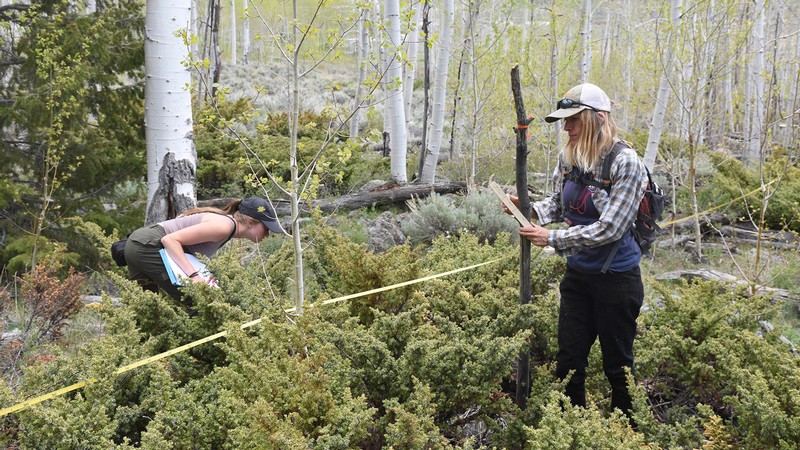 Field Technicians Rebekah Adams and Etta Crowley take vegetation measurement under Pando, the world's largest living organism. A recent evaluation of the massive aspen stand in south-central Utah found that Pando seems to be taking three disparate ecological paths based on how the different segments are managed. 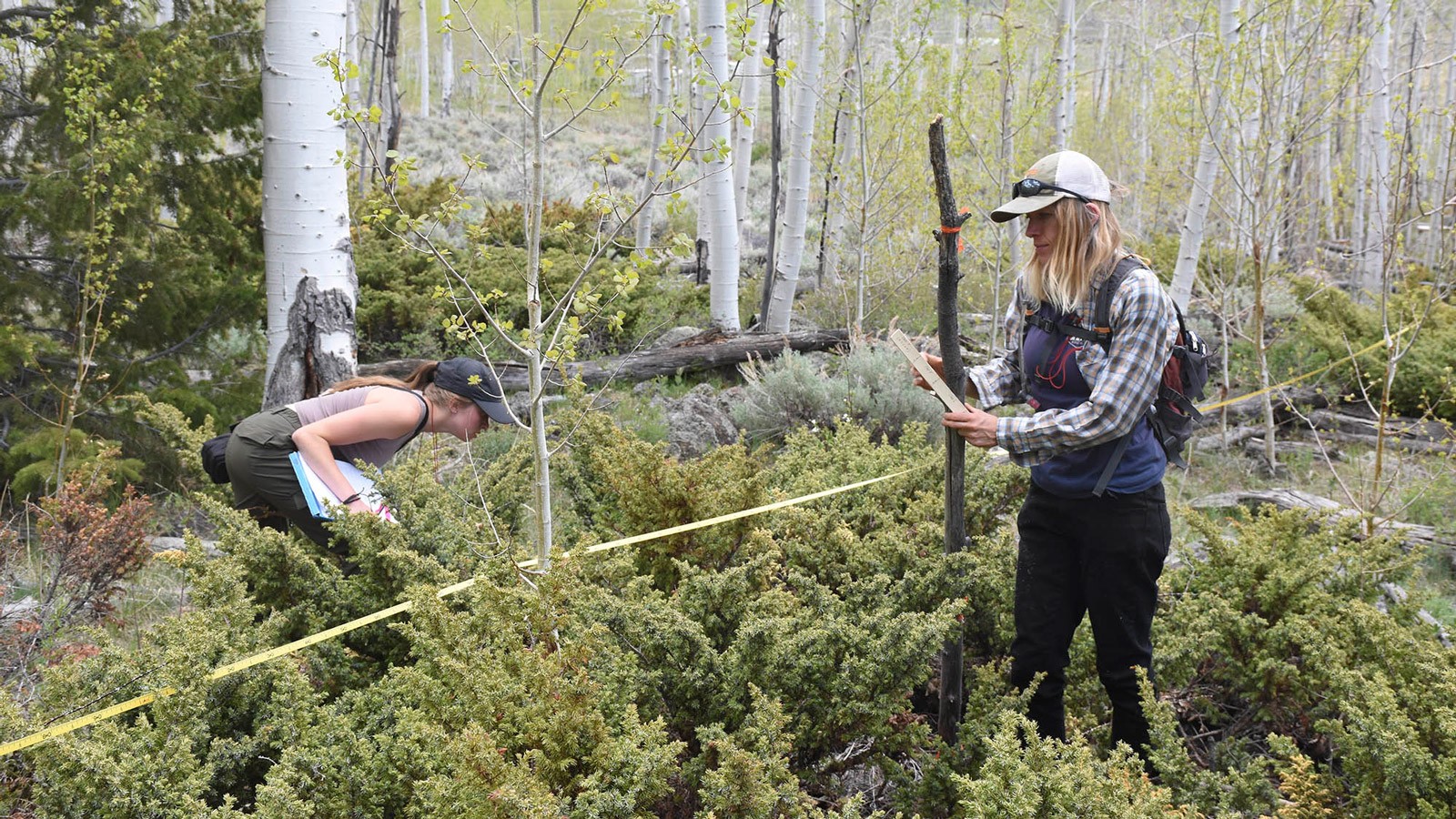 It’s ancient, it’s massive, and it is faltering. The gargantuan aspen stand dubbed “Pando,” located in south-central Utah, is more than 100 acres of quivering, genetically identical plant life, thought to be the largest living organism on earth (based on dry weight mass, 13 million pounds). What looks like a shimmering panorama of individual trees is actually a group of genetically identical stems with an immense shared root system.

Now, after a lifetime that may have stretched across millennia, the “trembling giant” is beginning to break up, according to new research.

Paul Rogers, adjunct professor of ecology in the Quinney College of Natural Resources and director of the Western Aspen Alliance, completed the first comprehensive evaluation of Pando five years ago. It showed that browsing deer (and to a lesser degree cattle) were harming the stand — limiting growth of new aspen suckers and putting an effective expiration date on the colossal plant. As older trees aged out, new aspen sprouts weren’t surviving voracious browsers to replace them. Pando was slowly dying.

In response to the threat, managers erected fencing around a section of the stand to keep grazing animals out, creating an experiment of sorts. Rogers recently returned to evaluate the strategy, and to do a well-check on the overall health of Pando. He reported his findings in the journal Conservation Science and Practice.

Pando seems to be taking three disparate ecological paths based on how the segments are managed, according to the research. Around 16 percent of the stand is adequately fenced to keep out browsing animals, with new aspen suckers surviving those first tender years to establish into new trees. But across more than a third of the stand, fencing had fallen into disrepair and was only lately reinforced. Past browsing still has adverse impacts in this section; old and dying trees still outnumber the young.

And the areas that remain unfenced (approximately 50 percent of the stand) continue to have concentrated levels of deer and cattle consuming the bulk of young sprouts. These hard-hit zones are now shifting ecologically in distinct ways, Rogers said. Mature aspen stems die without being replaced, opening the overstory and allowing more sunlight to consistently reach the forest floor, which alters plant composition. These unfenced areas are experiencing the most rapid aspen decline, while the other fenced areas are taking their own unique courses — in effect, breaking up this unique, historically uniform forest.

The solution to Pando’s survival, Rogers said, might not be just more fencing. While unfenced areas are rapidly dying off, fencing alone is encouraging single-aged regeneration in a forest that has sustained itself over the centuries by varying growth. While this may not seem critical, aspen and understory growth patterns at odds from the past are already occurring, said Rogers.

In Utah and across the West, Pando is iconic, and something of a canary in the coal mine. As a keystone species, aspen forests support high levels of biodiversity — from chickadees to thimbleberry. As aspen ecosystems flourish or diminish, myriad dependent species follow suit. Long-term failure for new recruitment in aspen systems may have cascading effects on hundreds of species dependent on them.

Additionally, there are aesthetic and philosophical problems with a fencing strategy, Rogers said.

“I think that if we try to save the organism with fences alone, we’ll find ourselves trying to create something like a zoo in the wild,” Rogers said. “Although the fencing strategy is well-intentioned, we’ll ultimately need to address the underlying problems of too many browsing deer and cattle on this landscape.”

Pando is a paradox. It is reputed to be the earth’s largest organism, but it is comparatively small in the big-picture of conservation challenges across the globe — or even just in Utah, he said. But as a symbol, it speaks to the fate of aspen diversity and healthy human interactions with the earth at-large. Lessons learned while protecting Pando also offer perspective on struggling aspen forests spanning the earth's northern hemisphere. 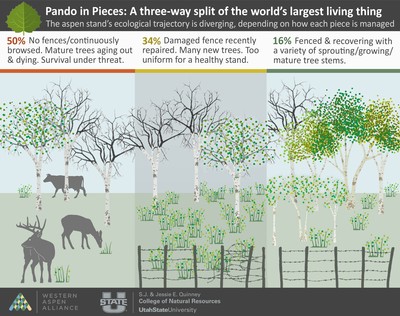 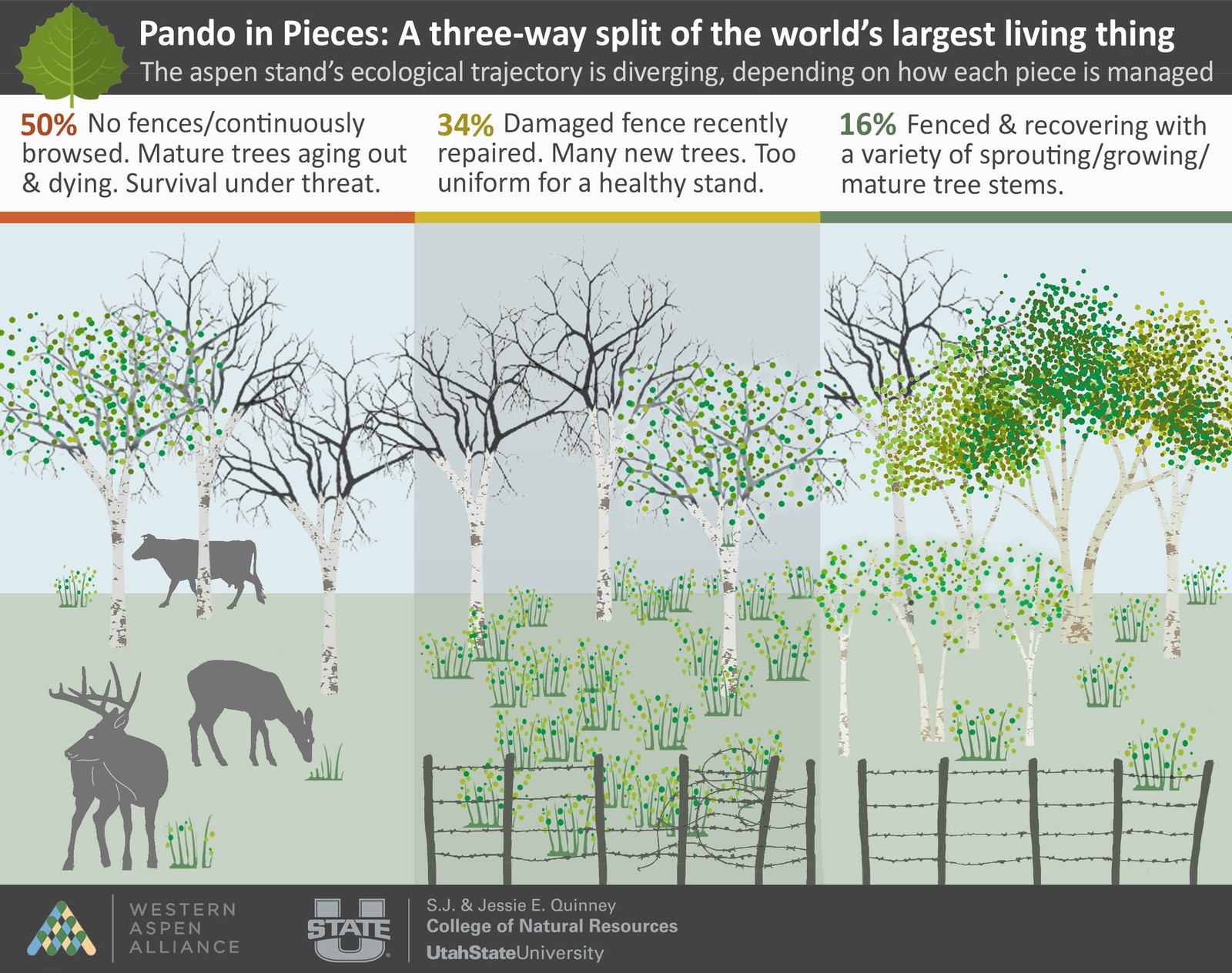 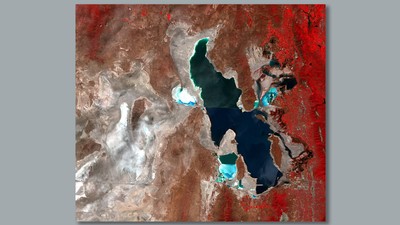