PRICE, Utah — While there is no substitute for actual experience, Utah State University Eastern also has the next best thing for the officers in its police academy. Using funds from a state grant awarded to Career and Technical Education, the USU Eastern Police Academy has invested in a virtual reality training system from Apex Officer, which is helping its officers gain valuable experience.

“This is brand-new technology and not too many people are using it yet,” said Scott Henrie, director of the USU Eastern Police Academy and a professor of Criminal Justice. “We are one of only two universities who have purchased this system to use in an academy. There are about 60 police departments who have this system currently. We are the only one in the state of Utah, department-wise or academy-wise, that has this system.”

Video training has taken a gigantic leap forward with the addition of virtual reality. According to Henrie, his officer training in the 1980s consisted of a projector screen with a video tape of one situation that was always the same. Henrie said the academy has been looking to enhance its training for quite some time and now feels it has the latest and greatest technology.

Now, with the three-dimensional virtual reality simulator, as well as customizable programs, officers can simulate various scenarios over and over again, each time with different objectives, setups and locations. This allows officers to practice de-escalation scenarios as well as use of force and implicit bias situations, all prior to joining a law enforcement agency.

“With virtual reality, you are in the whole thing. It is 360 degrees, and you see everything,” Henrie said. “So we’ve brought the environment from a stationary screen to about as real as it can be, short of a person actually doing it.”

When Henrie first tried the system for himself, he was shocked at how real the system made the situations feel. While the system is a great addition to the academy, Henrie also makes sure that it is not a substitute for other training but extra practice for high pressure scenarios.

“We use this system to enhance the training they are already doing,” he said. “With this system, we can stop, back it up and re-run it. This gives them more opportunity to work on situations.”

Henrie and his cadets in training are not the only officers who have used the system. The academy has also shared the technology with both the Price City Police Department and the Price Sheriff’s Office.

“The feedback I get from the officers right now is that all of them love it,” Henrie said. “VR is the newest and greatest thing and people love to do that. To get to do that in a work setting and get to do something that helps you, they think it’s great and eat it up.”

USU Eastern’s police academy is a satellite training program of the Utah Department of Public Safety and its Peace Officer Standards and Training. The academy is one of the elite training centers for law enforcement training in eastern Utah. Students from both USU Eastern and USU Blanding can take courses together virtually, with in-person training at USU Eastern.

“We have successfully seen 85% of our graduates find work, whether that be here or in another state,” Henrie said. “Utah is recognized as one of the leaders in police training in the country.” 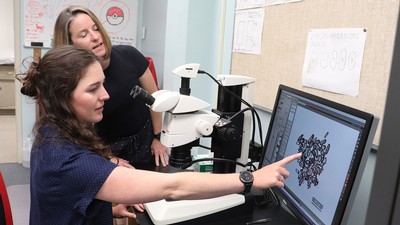