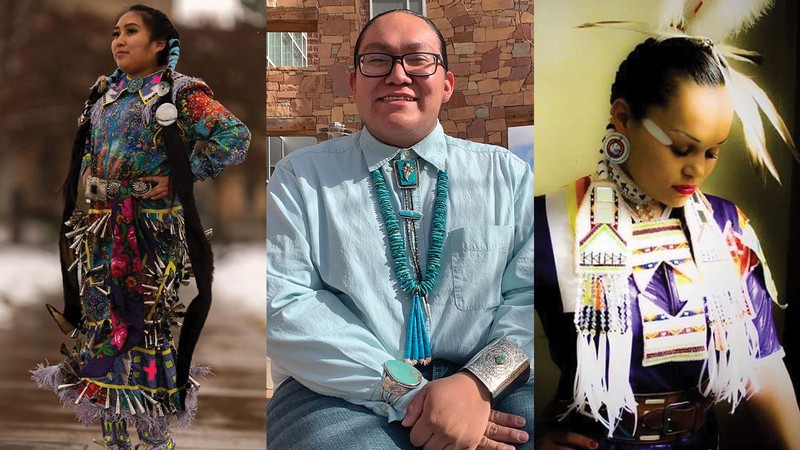 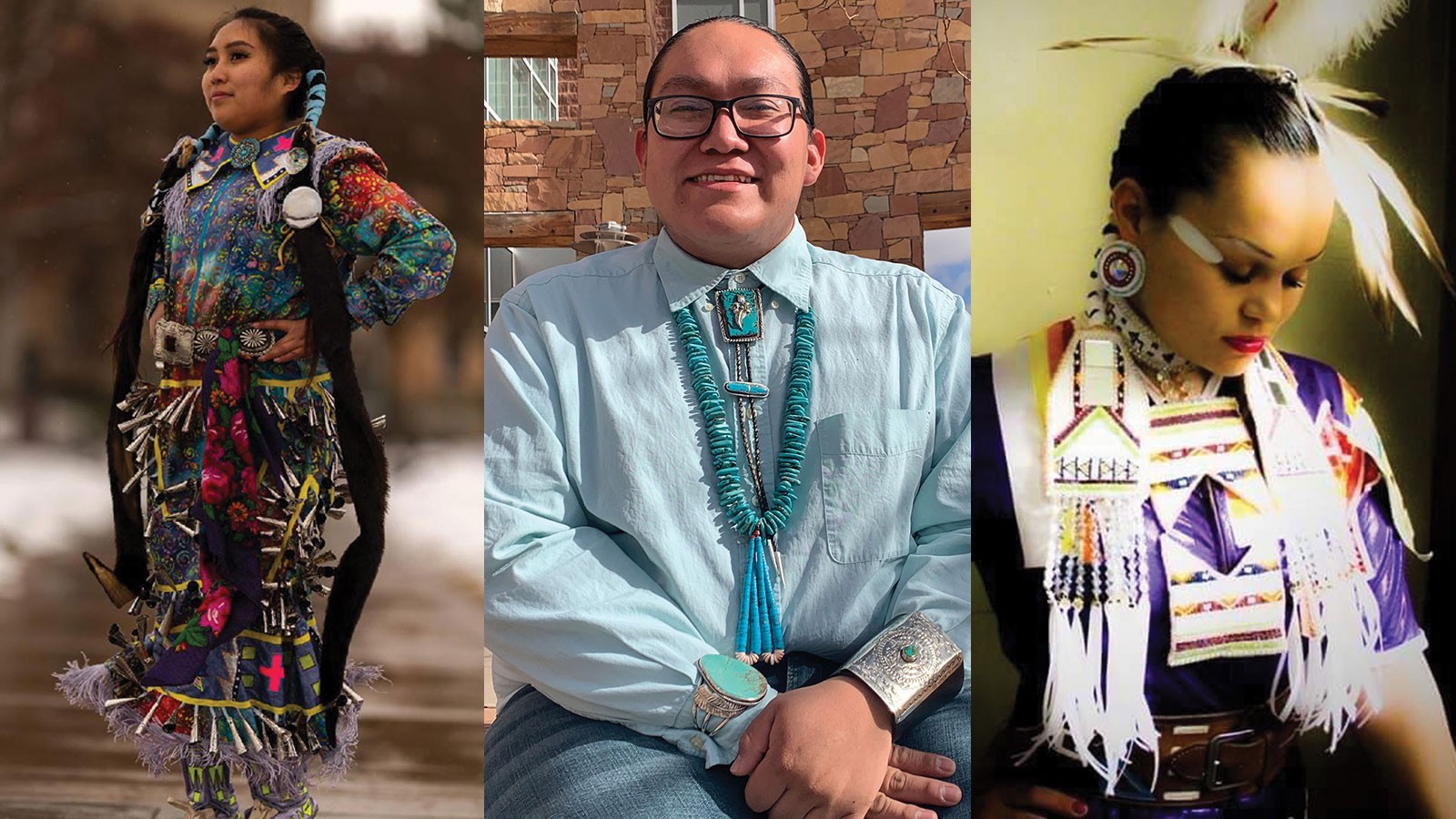 Utah State University is proud to celebrate Native American Heritage Month. As Utah’s land-grant institution, USU provides access to higher education throughout Utah and works with various tribes around the state to offer classes and higher education opportunities in their areas. The following are interviews from USU Native American students Ali Marie Denny (USU Uintah Basin), Quisheima Brown (USU Logan), and Hunter Warren (USU Blanding). They share their stories and how they work to preserve their Native American heritage.

Ali Marie Denny is set for graduation in December 2020 with a bachelor’s in health education and promotion at USU Uintah Basin. She was also accepted into USU’s Master of Public Health program.

“I want to utilize my health education to promote a holistic approach toward a healthy and active lifestyle,” she said. “An intersect between my pursuit of a health career and supporting my personal health is consistently eating right and working out daily. I love to work out and I feel that applying my knowledge of nutrition, how the body functions on a cellular level and maintaining a balance of rest and physical activity is vital because I believe that promoting a healthy lifestyle begins with myself.”

Denny is originally from Montana, where she was raised by her grandmother, a Nakota Sioux enrolled in Fort Belknap, Mont. She is an enrolled tribal member of the Chippewa Cree Tribe located in Rocky Boy, Mont.

“My Indian name is White Eagle Plume Woman,” Denny said. “I have always participated in sweats, powwows, prayed and tried to attain as much of my native language as possible. I appreciate my culture, songs, dances and way of life. I understand we are all related (wind, trees, water, animals, etcetera.). Everything is alive and is always listening. We are never alone.”

“I try to incorporate prayer in my daily activities,” she said. “I also utilize sage, sweetgrass and cedar regularly. I was taught that sage protects you and cleanses the space around you in order to have pure and positive energy. I was told sweetgrass is your direct connection to the great Creator and cedar was used for ceremonies during doctoring and to have a sacred space for prayer.”

Denny also seeks to stay connected to her culture through dance and other activities.

“I love to sew, bead, dance and pray regularly,” she said. “I believe staying connected to my culture through powwows is important because that’s how I was raised. I love hearing the songs. I feel free and have endless energy.”

Above everything, Denny is very proud of her heritage. She seeks to stay connected to her roots and to learn as much as she can about the history of her people from her elders and from stories that have been passed down from generation to generation.

“Staying connected to strong roots is the foundation to the underlying knowledge our ancestors fought and died for,” she said.” Understanding our history as Native American people is crucial to appreciating how strong our people truly are. We have a lot of teachings about space, time and energy that were handed down by word of mouth. Our grandparents and great grandparents are closely linked to that knowledge and I believe it is vital to spend time with our elders in order to achieve a higher familiarity of our heritage.”

Facing adversity, Denny accomplished a momentous milestone earning her associates in May 2019. Having just lost her mother to pneumonia earlier in the year, she was proud of the way she was able to keep going.

“I did not give up or reside in depression,” she said. “I kept going and focused on something productive. To have the honor song played at the graduation commencement ceremony felt like Utah State University was including the Native Americans in the ceremony. I felt humbled, honored and happy because those songs are comforting to me. Another song that made me feel good during the ceremony was at the very beginning when we were walking out and the bagpipes were utilized. That gave me chills, as I am also part Scottish and I love the sound of bagpipes.”

USU Uintah Basin works in partnership with the Ute Tribe Education Department in Fort Duchesne in providing educational opportunities to residents of the Uintah and Ouray reservation. The campus has also chosen to incorporate an honor song performed each year by the Red Spirit Singers during its commencement ceremony.

Quisheima Brown is studying wildlife ecology and management with a minor in fisheries on USU’s Logan campus. She began her studies in 2015 at USU Blanding, where she received her associate degree. Her career goals are to enter the field of marine biology.

“I would love to study animals and help preserve these wonderful habitats,” she said. “I find it fascinating that we have a gorgeous ecosystem and it has rarely been discovered. I’m also interested in conservation. There are parts of the ocean that are endangered by pollution and overfishing. I would like to be part of the solution of helping our oceans recover and help wildlife.”

Brown is originally from Huerfano, a town that is part of the Navajo Nation in the northwest corner of New Mexico. She grew up on the reservation in a very traditional family. Her mother’s side of the family was and continues to be a big part of her life, teaching her about her family and tribe traditions.

“I had a great-grandma and grandma who were there to guide me, and we would go to my grandma’s almost every weekend,” Brown said. “It was fun because I would help take care of my grandma and her livestock. She would teach me stuff like how to take care of little lambs we had or how to start a fire.”

One of Brown’s favorite activities was attending powwows, a celebration of Native American culture in which people gather for the purpose of dancing, singing and honoring the traditions of their ancestors. Brown especially loved the dances and was able to participate in them throughout her childhood.

“Powwows are not from the Navajo tribe, but they are universal for tribes to come together and celebrate,” she said. “I began to dance Jingle Dress, which I instantly fell in love with because it’s beautiful and the dance itself is memorizing. Growing up, my own traditional ways and dancing at powwows made me feel special.”

Brown’s passion for dance was enhanced even more when she came to USU Blanding. Getting involved with the Cultural Ambassador Performance Program (CAPP), she was encouraged to participate in hoop dancing. Having always loved watching the dance as a child, she decided to give it a try for the first time.

“I never stopped after that,” she said. “After my first performance, I knew it was something I was going to be passionate about. Hoop dancing makes me feel good. When I dance, it feels like magic. I love watching people’s reactions when I do cool formations with my hoops, especially when I learned new tricks.”

Coming to USU’s Logan campus, Brown got involved with USU’s Inclusion Center. There, she was able to meet with other students of Indigenous origin and make new friends. She helped with fundraisers and events, and also got involved in the Native American Student Council (NASC), eventually becoming president of the organization from 2018-19.

“The position made me learn so much about myself,” Brown said. “When I became the president, I was incredibly happy with myself and had goals that I wanted to accomplish.”

NASC works to create a community for Native American students and an inclusive environment for Non-Native students to experience authentic Native culture and norms. The organization has even participated in the Homecoming parade, and performed half time shows at USU home basketball games.

“It was awesome to perform and display our culture in front of thousands of people,” Brown said. “It was something memorable that I will not forget.”

Though away from her family while working to obtain her college degree, Brown continues to participate in the traditions of her family, while also seeking to show her culture and share it with others. She is also working to be able to make the world a better place and to improve the lives of her people.

“We have students who are going to college making themselves better and coming back to help our people,” she said. “My culture is part of who I am. I want to bring better resources and be motivating to future generations. I also love showing it to other people. I want to try my best to keep my tradition and culture alive.”

In his time at USU Blanding, Warren has been very active in the USU Student Association. During his sophomore and junior years, he served as the Native American Representative at the Blanding campus. Now in his senior year, he is the executive vice president for the USU Blanding Student Association. Warren is proud to serve in the position and to listen to student needs.

While serving as the Native American representative, Warren worked to implement activities to spread diversity on campus. One event he was proud of was working to celebrate Indigenous Peoples Day on campus for the first time. The day consisted of several events, including a morning run, a cookout, various keynote speakers and art vendors, and ended with the Utah Education Network Native American Film Festival. Another large event he helped orchestrate was the first annual Celebrating & Preserving Indigenous Roots Powwow.

“These two events were two of the largest events that took place to honor the Native American Culture here on campus and in the region,” Warren said.

Now nearing the close of his time at USU Blanding, Warren reflected on his time on campus. He looked back fondly on memories of professors and staff going above and beyond to make sure students were successful in their endeavors and how the campus has a family feel.

“My experience here as a student and a student government leader has been nothing but great because we are all a part of one big family,” Warren said. “You know everyone, and everyone knows you. Because Blanding is close to so many reservations, there is a lot of diversity here. Being a Native American student here is easy because staff will take the time to get to know you and your culture. With all the diversity here, it makes you feel like you are home and cared for.”

Warren always strives to preserve his Native American heritage and to learn as much as he can from his parents and other family members. Whenever he is able, he participates in family activities, such as cooking, dances, demonstrations, games and much more. He is especially diligent in learning and maintaining his knowledge and ability to speak the Navajo language.

“I think the most important tradition that people should be aware of is the language,” he said. “People say that when the language goes away, then the culture and everything will die too. Continuing to learn about your language is very important because it's in everything. I always ask question to my parents on how to say things in Navajo. You learn language in activities, singing, dancing, games, demonstrations, etcetera. That's what makes it very important.”

Above all, Warren maintains his curiosity in all things about his heritage and traditions. He is always on the lookout for something he did not know before.