The Animal Science Building included a modern creamery, and in 1921, the College hired Gustav Wilster to oversee instruction. One of Wilster's innovations was an ice cream manufacturing process.

"Wilster is now making lacto ice cream which has never before been produced in Utah," noted Student Life. While instructive, the creamery was also operated on a commercial basis, and students and visitors to campus could purchase cheese, butter, or generous portions of ice cream at the Dairy Products Laboratory in the Animal Science Building. Ice cold buttermilk could generally be had for the asking. The first taste of Aggie Ice Cream became a rite-of-passage on campus, and is fondly remembered by many students and alumni.

People loved it so much, more flavors were created. Now, Aggie Ice Cream has 26 different flavors and is known around the world.

Why is it so good? Well, Aggie Ice Cream has a 12% butterfat content. It's aged slightly longer and contains less air than most commercial brands.

So how is it known around the world? A Korean USU student named Duk-Man Lee loved the ice-cream so much, he devised a plan to take it home with him. He gathered a group of Korean business men, who proposed the idea to USU, and in June 2000, the first international Aggie Ice Cream was opened in Seoul, South Korea.

Not only that, but Aggie Ice Cream was also the first ice cream to make it to outer space, thanks to USU's aerospace technologies division. 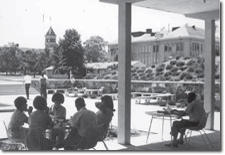