Completion of Romney Stadium brought renewed interest to create an annual Homecoming game. "For years there have been murmurs from alumni far and near," wrote Alumni Association Executive Secretary Alden Lillywhite, "that the USAC begin such an event."

The new venue made the homecoming celebration possible, and on October 11, 1930 the College invited the University of Colorado to Logan to help inaugurate the event. The Football Homecoming Committee was assisted in planning for the event by the College's Athletic Council, the Alumni Association, the Associated Students, and the Logan Chamber of Commerce.

The days events included pep rallies; patriotic flag ceremonies involving ROTC students; a downtown parade featuring floats by Bingham Cafe, J.C. Penney, Ford Motor Company, Needham Jewelers, Logan Hardware and other local merchants; and a procession to the stadium featuring sororities and fraternities, the Benos and Spurs (who had busily manufactured special pop poms in Aggie blue and white). All the past Aggie lettermen who could be located were also involved. One thousand of the best seats in the stadium were reserved for returning alumni.

Although extraordinary, the pre game festivities were only prelude to what Student Life reported as "one of the most thrilling contests ever staged..." Pundits had picked Colorado as the clear favorite to take the Rocky Mountain Conference championship, having lost only one game the previous season to the University of Utah, who went undefeated. While the Aggies had already notched two conference wins, and were tied for fi rst place, they were underdogs to Colorado, who had yet to play a conference game. The Aggies battled the "silver and gold" to a scoreless tie, in which the Aggie defense held the goal line on six separate occasions. The Aggies threatened four times to score, but were similarly rebuffed by Colorado.

A standing room only crowd witnessed the College's first Homecoming Game. The new stadium repeatedly filled to capacity as the Aggies consistently fielded highly competitive teams during the 1930s.

One of the most memorable teams was the squad from 1936. This Rocky Mountain Conference champion team included Bernard Magnusson, Tracy Maero, Dallas Greener and fi rst team All-American half-back Kent Ryan in the backfield; with Elvin Wayment, Edwin Peterson, Gerald Mathews, Edward Wade, and Clark White on the line. Team Captain Robert Bunker and Carl Mullenaux were at the end positions. The 1936 team went undefeated, tying the University of Denver 0 to 0 before holding both BYU and the University of Utah scoreless. 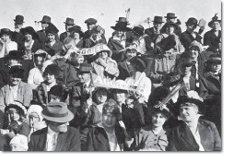 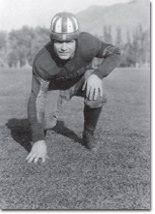