Utah State has ties with the military that stretch back to its beginnings. Since Utah State was established under the Land-Grant Act of 1862, one of the required subjects to be taught was military science.

In 1892, military science was compulsory for both male and female students. The college catalog noted that these drills produced most happy results. However, compulsory military drills for women did not endure for long. In 1893, in lieu of military science, women participated in a class taught by Miss Clare Kenyon, entitled "Physical Culture."

During World War I, the facilities of most land-grant institutions were pressed into service, and the Agricultural College was no exception. The college was almost completely shut down to support the war effort, and Old Main auditorium and the Smart Gymnasium became barracks. It was a common sight on Thursday afternoons to see cadets drilling on the Quad. The military ties continued during World War II.

In fact, in 1947 there were more second lieutenants commissioned from Utah State than from any other school in the country, except for the U.S. Military Academy at West Point. This occurrence earned USU the nickname, "West Point of the West." However, in 1955, after Military Science was no longer required for men, this sight of cadets on the Quad became more rare, and enrollment in military science tapered off. 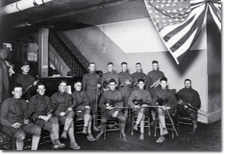