Students in the School of Forest, Range and Wildlife organized a Forestry Club in 1928, and in honor of their newly appointed Dean, Paul M. Dunn, inaugurated an annual "Paul's Party" in 1938.

As part of the festivities, members presented Dunn with a huge wooden statue of the "patron saint of all true foresters," Paul Bunyan. The event was offi cially recognized in 1939 as Forester's Week. The celebrations included competitions, along with a good share of bravado and hi-jinx involving the forester's "arch rivals," the engineers.

During the 1939 festivities, the Forestry Club arranged with Logan's radio station KVNU to broadcast its assembly. It was the first radio broadcast made from the College auditorium. Additionally, club members commandeered the Student Life offices, and began the tradition of publishing a special Forester's Week edition. According to reports, the "engineers had a lot to say about the activities, and ended up kidnapping Paul Bunyan from the fourth floor of our building and holding him for ransom of 500 tickets" to the Forester's Ball. When the Foresters refused to pay the tribute, the engineers hung Paul from the entrance of the Engineering Building - "much to the delight of the engineers and amusement of the student body at large."

The following year, in "partial payment for the gross insult..." the foresters burned an effi gy of an engineer on the front steps of the Engineering Building, "while the engineers stood helplessly by and watched with tears in their eyes." The engineers made several attempts to again abscond with Paul, but each "attempt was neatly curbed (but sometimes not so gently) by the ever alert and well organized Foresters."

During the war years, the depleted student body declared a hiatus for Forestry Week. In 1946, however, the foresters and engineers resumed their feud, with the engineers seizing the opportunity early during fall quarter to kidnap Paul Bunyan. The foresters searched in vain for their lost "idol," who eventually showed up on April 1st, at the beginning of Forestry Week, hanging from the campus flagpole.

During succeeding years the foresters/engineers feud became increasingly more bitter. In 1947 for instance, unable to get their hands on Paul, the engineers kidnapped the Queen of the Forestry Ball, Lenore Hansen, drove her to Pocatello, Idaho, and sequestered her in a motel room. As "friendly" competitions became ever more rough, and pranks ever more dangerous, the College Administration declared an end to hostilities and to Forestry Week in 1953.

The large footprints of Paul Bunyan's boots which appear painted on campus sidewalks each spring, are the only hint of the once vibrant, sometimes raucous, Forestry Week of more than 50 years ago. 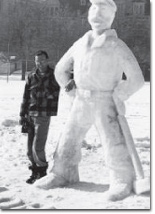