Happy AT Awareness Day! What’s your favorite AT?

By JoLynne J. Lyon | April 14, 2021
Cameron takes his custom piano AT for a test drive at UATP-Logan.
Ray Emmart, who was then a UATP employee
and who helped with the design, is watching.

Our coordinators often customize the solutions they create, and their answers were just as individual as the work they do.

“One of my favorite AT projects was when we were working with a young man who had low muscle tone,” said UATP Logan Coordinator Dan O’Crowley. In 2019, Cameron Roos traveled from St. George with his father, David, looking for a way for Cameron to keep playing the piano. Cameron had enjoyed making music since he was a child, but his muscular dystrophy was making it much harder to do.

The family had been online, looking for a device that would support his wrists and help him move his arms up and down the keyboard. “There doesn’t seem to be a lot out there, but the one we did find was around $2000, and we just kind of gave up," David said. "We just didn’t have the budget at the time.”

UATP staff created a device from a sliding door track and rollers, some plywood and some pipe insulation. They created sliding carts to support Cameron’s wrists. “We were able to use something in industry, and use it for something that was totally different,” said O’Crowley. The project stood out to him because UATP was using products that were readily available. “Finding items and repurposing them for assistive technology is a win-win.”

The Roos family took the device home for the cost of materials.

“He brought it home and played with it,” David said in an interview nearly two years later. “It’s been wonderful for him to take the pressure off his arms and use it periodically. … It was a very creative solution.” 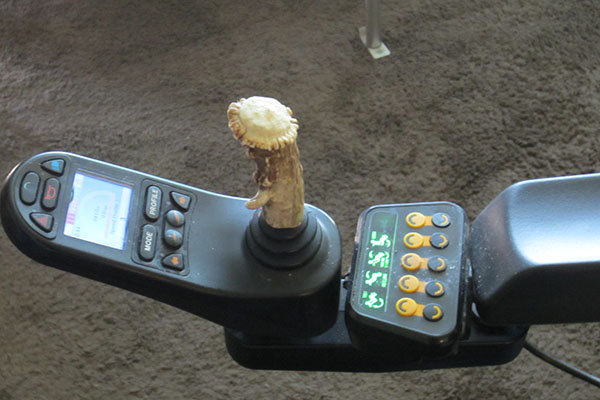 UATP Uintah Basin Coordinator  Cameron Cressall has a hard time picking a favorite. “I really, really enjoy working with kids,” he said. “My reward is seeing their lives change, seeing them grow and develop, and with kids, they don’t hide it. That’s very rewarding.”

But one other project stands out in his mind: the time he used an old deer antler to create a new joystick for Montana Filmore, a client whose wheelchair joystick had been giving him a lot of trouble. The customized adaption solved some problems: more height meant he wasn’t accidentally hitting the wrong buttons. His chair was easier to maneuver. And the antler joystick had something the off-the-shelf one didn’t have: Western style.

“It was not only something that did what it was supposed to do, but he was proud of it. It was really simple but it had a lot of meaning,” Cressall said.