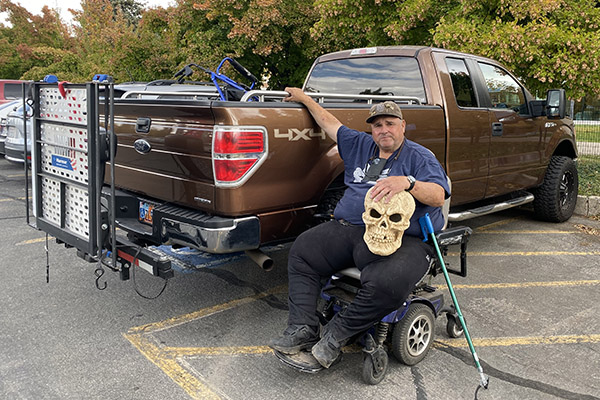 George shows off his new rails on his way to put up Halloween decorations at work.

LOGAN—A UATP volunteer can now move from the driver’s seat of his truck to his wheelchair lift at the back without hurting his fingers, thanks to some reused rails and some ingenuity from the Utah Assistive Technology Program.

George Gallagher already knew he needed some rails for his truck. He had been steadying himself as he walked back to access his wheelchair by holding onto the sides of the cargo bed. It helped him reach his wheelchair, which rides on a lift at the back, but the dark metal surface got so hot in the summer sun, he was burning his hands. The metal also had some sharp edges that dug into his fingers.

He knew some rails could help. So when he saw a set of them being replaced in an elevator at the University Inn where he works, he acted fast and approched the man who removed them. “I said, ‘Can I have those?’ He goes, ‘Yeah, here. I'll give you the parts to attach them to, the set screws, everything.’”

Gallagher expected they would be a lot better to grab onto, and they were. What surprised him was how much they looked like they were made for his truck. He took them to the fabrication lab at the Utah Assistive Technology Program in Logan, where he volunteers. There, Coordinator Dan O’Crowley worked to attach them while Gallagher held them steady.

The result: sturdy grab bars that could also double as a means to secure cargo. Gallagher likes the new look.

“I couldn’t do anything without my wheelchair,” he said. And now he can walk to it without burning his hands along the way.