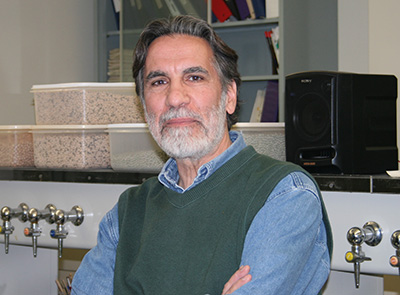 Frank J. Messina passed away unexpectedly at his home in Logan, UT on Friday, February 25, 2022. A steady and selfless father of three, loyal friend, and respected colleague to many, he will be sorely missed.

Frank was born in 1955 to Carmelo and Carmelina Messina in Lawrence, Massachusetts, the second of three children. He attended Central Catholic High School and graduated with a BA in biology from Clark University in Worcester, MA. He completed a PhD in Ecology and Evolutionary Biology in 1982 from Cornell University in Ithaca, NY. Studying insect-goldenrod associations for his doctorate research forged a lifelong interest in insect behavior and population genetics. In 1982, he began a post-doc at the Boyce Thompson Institute for Plant Research in Ithaca, NY. There he met both his future wife and Callosobruchus maculatus, the model organism central to his research for 40 years.

Frank has been a member of the biology faculty at Utah State University since 1986. He was supremely dedicated to his teaching responsibilities and was a passionate educator.  He found greatest fulfillment teaching Evolutionary Biology, which he taught at USU since 1987.  Frank received the USU College of Science Teacher of the Year distinction in 2013.

Frank was inordinately knowledgeable, had a remarkable memory, and could discourse in detail on many subjects. He was a constant source of laughter and will be remembered for his witty commentary. His interests included the Beatles and the blues, the Twilight Zone series, baseball (Yankees fan), and reading evolution treatises and history. In his late 50s, he began learning Italian and became a devotee of Italian language films. He practiced speaking Italian with a small Skype group of fellow language learners, now friends despite never meeting in person. Three trips to Italy allowed him to further practice his language skills and deepened his affection for his Italian heritage.

Most importantly, his children gave joy and meaning to his life. We were privileged to welcome a beautiful daughter followed by the wonder of twin sons. Now thoughtful, intelligent, mature adults, they are his legacy and have expanded our family to include their partners and young children. A new grandfather, Frank held his grandchild just once prior to his passing.

Frank is survived by his wife, Linnea Johnson and his daughter, Alyssa, sons, Daniel and Peter (Carmen), and granddaughter, Isabelle, of Salt Lake City.

To honor Frank, family and friends have established the Frank Messina Memorial Scholarship Endowment at Utah State University. The scholarship will support students in the Biology Department.

Donations to the Endowment can be made using the secure giving form on this page or one of the following ways:

Stock or Wire Transfer:
Contact Nate Lundberg at nate.lundberg@usu.edu or 435-797-1325 for instructions

The Endowment will exist in perpetuity and will support students in the Biology Department. Your gift will be used only for the stated purpose if the required minimum for an endowment is met by June 30, 2027. If not met, the gift will be considered expendable towards the stated purpose. By donating, you recognize that future unforeseen circumstances may alter or remove the purpose for which the endowment was established. In such an event, the Unit Administrator, in consultation with USU’s President, shall direct that the principal and income of the endowment be devoted to purposes that they deem will be most consistent with the original purpose of the endowment.

The Endowment will be invested under the direction of the University Public Treasurer. Oversight and advisement of investments will be provided by the USU Investment Advisory Committee in accordance with USU’s investment policy. The USU Foundation is the legal entity designated by USU to receive charitable gifts in support of its academic mission.

By letter dated May 21, 2008, the Internal Revenue Service has declared the USU Foundation (federal tax identification number 87-0627128), to be a duly qualified charitable organization under section 501(c)(3) and also an organization described in sections 509(a)(1) and 170(b)(1)(A)(iv) of the Internal Revenue Code. The Foundation is a duly chartered active Utah nonprofit corporation, under the provision of Utah Code, Title 16, Chapter 6a.