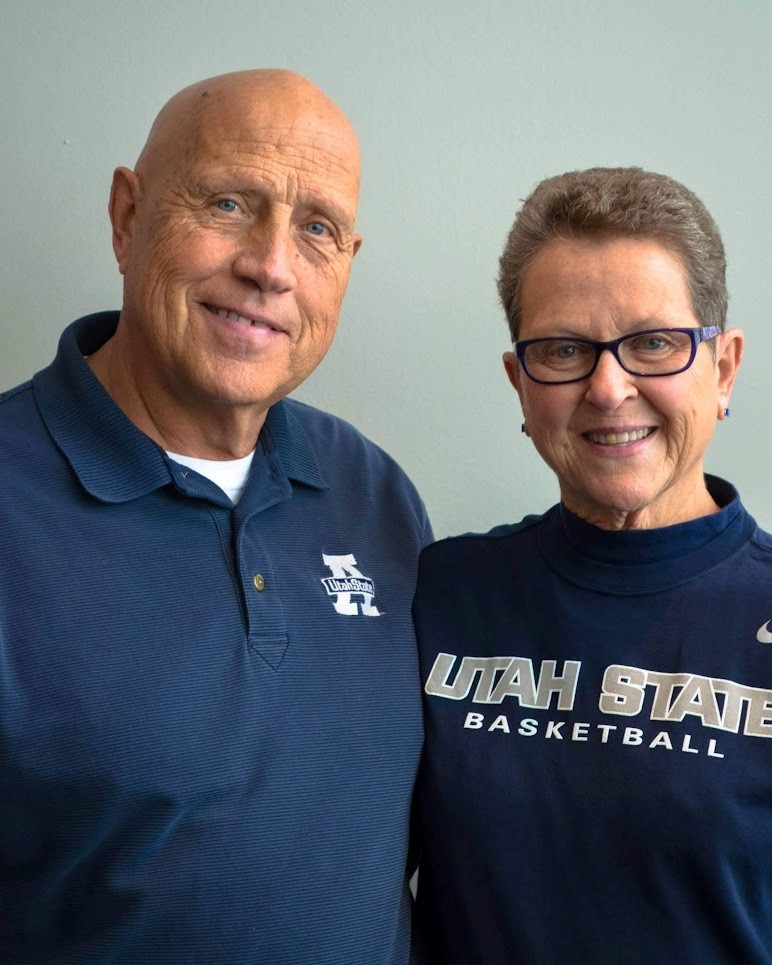 From singing the Scotsman with a crowd of Aggies at Maverik Stadium, to cheering on the women’s soccer team, athletics events are an important rite of passage for Utah State University students.

Students and fans who cheer on the Aggies play an important role in the success of USU student athletes. With more than 400 athletes participating on USU’s 16 varsity teams every year, support for these athletes is critical to ensuring achievement both in the classroom and in their chosen sport. And for USU community member Mike Kohler and his wife, Juanita, a former USU employee, supporting Aggie athletes and USU Athletics has become a life-long passion. 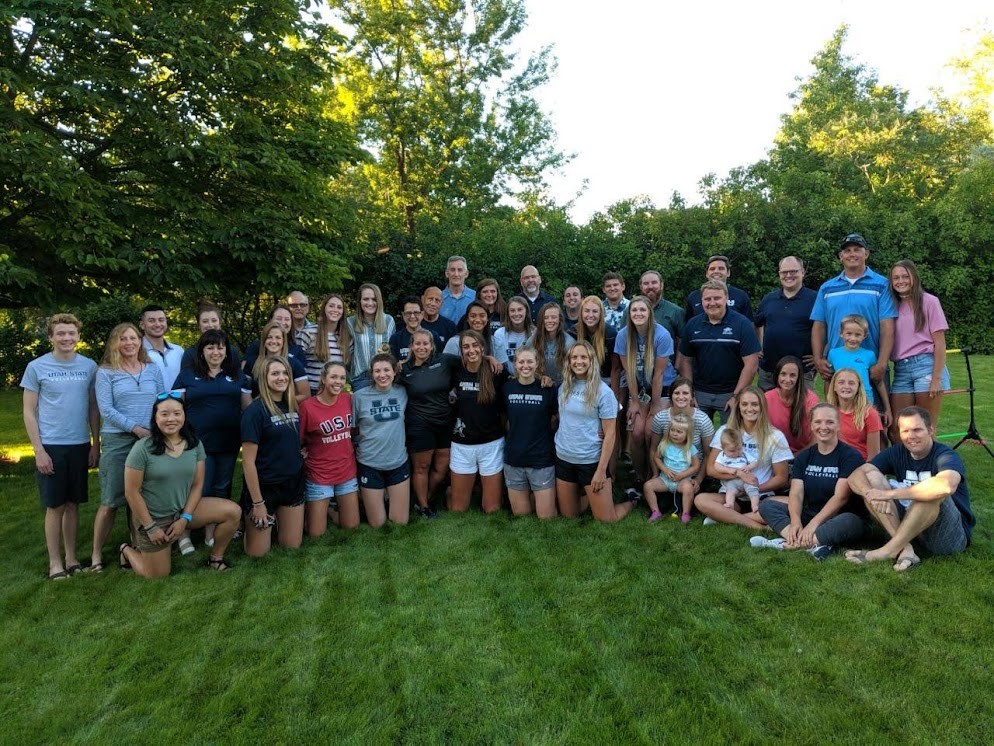 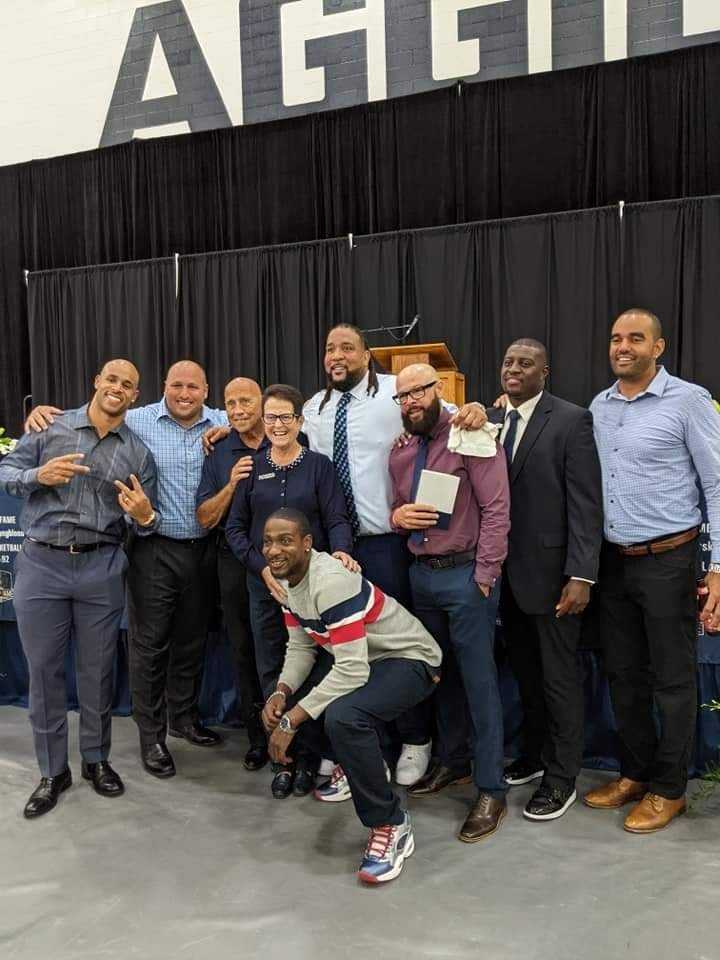 “USU athletes are like our family,” Juanita said. “There have been a constant flow of students and student athletes in our home over the decades.”

The couple, known among USU athletes for their “crazy Kohler family dinner,” enjoy getting to know the students by sharing good food, talk, laughter and sometimes hosting game night. The former owners of Twin-K Enterprises — a Dutch oven supply company started in 1986 by the Kohlers and Mike’s twin brother Wallace and his wife Pat — became famous around campus and in the community.

Beginning as an idea to start a company to create tools to use with Dutch ovens, the business quickly became lucrative and was able to produce cooking tables, three sizes of cooking tools, lid stands and more. The products were sold in all 50 states and abroad and, in 1989, the Kohler’s published the “World Championship Dutch Oven Cookbook,” printed in Cache Valley by Watkins printing. The book, that came directly from the Kohler’s, sold more than 114,683 copies while in print. After 33 amazing years, the couple officially retired Twin-K, but not their love for Dutch oven cooking.

“We wanted to encourage people to enjoy cooking in Dutch ovens and make it an attainable reality,” Mike said.

Quickly becoming known as the go-to experts for Dutch oven cooking, the couple taught Dutch oven classes every summer at varying locations for USU Enrichment between 1982-1997. The couple gained further notoriety with stories featured in publications including the LA Times, Sunset Magazine and numerous newspapers throughout Utah, Idaho and Wyoming.

Realizing their success with Twin-K could help others, the Kohlers started using their expertise for philanthropic activities at USU and in the Cache Valley area. They began hosting Dutch oven fundraising dinners in 1987, and along with Wallace and Pat, they were the first to help fund their children’s football and band programs at Sky View High School. The largest catering event the couple took on was in 1992 for USU’s Engineering Week Dinner at Hyrum City Park in Blacksmith Fork Canyon that served more than 500 students.

Over the course of 35 years, Mike and Juanita successfully catered hundreds of Dutch oven events in addition to their regular day jobs — Mike for Select Sires, the largest global artificial insemination cooperative for beef and dairy production in the United States, where he worked for 36 years, and Juanita at USU in the Languages, Philosophy and Speech Department, where she served for 25 years. During Juanita’s time on campus, she was able to help the former USU Classified Employee Association create a “Child of a Classified Employee Scholarship” and was named Classified Employee of the Year in the 1983-84 school year.

“Yes, we were crazy — raising kids, working and catering events,” Juanita recalled. “But some of our best memories come from events we catered.”

The couple proudly recall catering USU alum and famous football player Merlin Olsen’s 35th high school class reunion for Logan High School, as well as the Merlin Olsen Summer Golf Classic and memorial dinner held at Bear Lake in 2018 to honor Merlin’s memory and his love for the lake. Serving more than 140 people at the event, all proceeds were donated to the Bear Lake Scientific Research for the Environment Program.

There has been one common denominator for the couple’s charity throughout the years and that is USU Athletics. From 1990-1992, the couple catered dinners for the USU Volleyball team and were able to donate $1,500 each year. And, as the official couple charged with the unveiling of the “Meet the Challenge Bull” statue designed by former USU football player Mike Hamby, the Kohlers provided a “Big Blue Victory Celebration Dinner” that raised money for USU’s Football program. To support USU Men’s Basketball, the couple became the official hosts of the Gossner Classic Holiday Basketball Tournament. Working with the company to organize the event, Gossners provided all of the food, cheeses and supplies, while Mike and Juanita took care of getting hosts for teams, decorating and setting up the room and staffing it each night. In addition, the couple were volunteers on the committee that organized and ran the World Championship Dutch Oven Cookoff for eight years at USU’s formerly-held Festival of the American West. Juanita served on the board of directors of the Athletic Department’s “Big Blue Club” for many years and served as the organization’s first woman president from 2001 to 2002. Together, the couple enjoyed raising money for student athletic scholarships. As busy as they were, the Kohlers still found time to host dinners in their home for students from various athletic teams at USU.

“When I think about my years involved with Aggie Athletics, including my time on the USU Volleyball team and later, as part of the athletics staff, I think of all of the coaches, teammates, staff and fans that made my time special,” said Shay Sorenson Jeppsen ’13, ’15 Med, former USU Volleyball team member (2009-2012). “Mike and Juanita Kohler are definitely on that list. My teams were lucky enough to be hosted at the Kohler’s house for dinner and it was always a special experience.”
The couple reminisced about the many dinners, holidays and gatherings held at their home to celebrate and support USU student athletes.

“Over the years we hosted football and basketball players, international students and many other athletes from almost every athletic team,” said Mike. “We love supporting them and doing whatever we can to make students feel they have a home away from home during their time on campus.”

And for many USU student athletes, the support, mentorship and friendship offered by the Kohlers created life-long impacts for many former students.

“Mike and Juanita are truly incredible,” said USU alumni couple James ’07, ’08 MBA, a former USU football player (2003-2007) and Heather Heinrich ’10 Bohm, a former USU gymnast (2006-2010). “Not only do they support so many different activities at Utah State, but they have welcomed so many student athletes to be a part of their family. From attending games, both home and away, to hosting Dutch Oven tailgates and post competition hugs, they made our time at Utah State special. They are always our first phone call when we plan a trip back to Logan. They are much more than Aggie fans, they are the definition of True Aggies and we feel so privileged to have them in our lives.”
For Mike and Juanita, the fondness and connection with the students is mutual.

High school sweethearts Mike and Juanita met in 7th grade in North Logan, and have been together for more than 60 years. Their connection and affinity for USU Athletics seemed a natural trajectory as the couple were able to stay and work in the valley. Raising three children — two sons, USU alumni Dennis and Shayne, and one daughter, Kris — Mike and Juanita enjoy spending time with their family that now includes three grandchildren. The couple love to golf, and, of course, attend any USU athletic event they can.

Support for USU Athletics and its many programs provides opportunities and helps the institution move forward. In fact, a 2019 Gallup study on student athlete alumni outcomes found that college students who participate in athletics tend to fare better than nonathletes in their academic, personal and professional life during college and after graduation. The study also noted the importance of mentors and support and how it becomes a large indicator of overall student success. USU Athletics is proud to include Mike and Juanita in an elite group of Aggies who have gone above and beyond to bolster success for generations of USU student athletes.