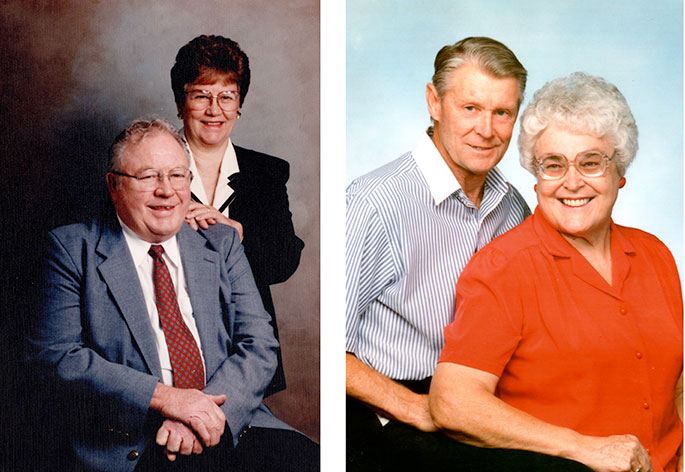 Two men with contrasting career paths inspired a Utah State University alumni couple to give back to their alma mater and help undergraduate engineering students working to earn a degree. Grant S. Cooper, Jr., and his wife, Luann Amundson Cooper, decided they wanted to honor their fathers with the creation of the Fred E. Amundson and Grant S. Cooper Memorial Scholarship in the College of Engineering.

Fred Amundson, a master tradesman, and Grant Cooper, Sr., an educator, served in careers that were distinctively different. Those differences influenced Grant and Luann’s lives, and ultimately became the motivation for them to want to help the next generation of learners.

“Our fathers established legacies not only for us, but for our children and grandchildren,” said Grant. “As we all look to establish our own legacy, we should be looking outside our own lives and asking what we can do to give back.”

Fred was a master tradesman with skills in plumbing, carpentry, electrical wiring, sheetrock and concrete — a jack of all trades, Luann recalled.

“He loved people, was willing to help anyone in need and when he started something, he got the job done right and at the lowest cost possible,” Luann continued. “He loved his family, gave his all to them, and enjoyed the simple things in life.”

Grant’s father was a dedicated educator who loved to enlighten the minds of young college students.

“For me, my dad was not only a college professor, but a loving husband and father to my entire family throughout my life,” Grant said.

“Education opens up avenues,” Grant said. “Without knowledge, we limit ourselves. Those who work to gain knowledge and find their passions — whether through traditional schooling, or through hands-on trades to understand their talents and abilities; it is knowledge that enables them to better their lives and make lasting contributions to society.”

During his time as a student at USU, Grant was a scholarship recipient and both he and Luann acknowledge the importance of receiving assistance in school. The couple said anyone wanting to go to USU should explore their options and look into scholarships.

“We are hopeful that those who receive scholarships, including ours, will one day give back when they are able,” Luann said. “We want to initiate a legacy of giving that inspires others to search for and find their talents and share them with others in a way that helps the next generation.”

The couple encourages anyone wanting to set up a scholarship at the university to do so — no matter the amount.

“Every little bit counts — even a small amount of money can make a big difference to a student,” the couple said.

And for anyone looking to attend USU, Grant said he received a world-class education that allowed him to interact with people from all over the world.

“The quality of faculty and students is outstanding and there are so many nationally-renowned programs,” Grant said. “There were so many opportunities for me to learn from other people, particularly those from different cultures.”

The education he earned provided Grant the foundation to enjoy a successful career with the Church of Jesus Christ of Latter Day-day Saints, where he held various positions including water research engineer, senior engineer and natural resources manager.

Grant and Luann are mindful that their USU experience has given them opportunities and abundance, including their five children. And as the next generation of Aggie students continue, the couple is proud to know that their family legacy will continue in those who receive the Fred E. Amundson and Grant S. Cooper Memorial Scholarship.

Fred E.  Amundson was born in Barron, Wisconsin, of Norwegian parentage. He spent his youth on a family farm, where he learned the importance of hard work and ingenuity from an early age. Fred later moved to Utah after serving in the Second World War, started a family in West Valley, Utah, and then moved his family to Richmond, Utah. In Cache Valley, Fred found employment as a journeyman plumber at Utah State University in maintenance services, where he worked from 1969 to 1988. He died on April 11, 2017.

Grant S. Cooper was born in Meadow, Utah. Growing up in the rural farming community showed him the simpler side of life, but his parents always instilled in him the value of a good education, as his father was the principal at the local elementary school. He was a veteran of the Second World War (Marines Air Corps in South Pacific), after which he returned to Utah to pursue a college education at Brigham Young University, earning both a bachelor’s and master’s in chemistry, was married and started a family. Grant, Sr., later moved his family to Southern California, where he found employment at Mt. San Antonio College. He taught chemistry at the college for over twenty-five years and then pursued a doctorate in chemistry at Utah State University from 1960 to 1969 on a National Science Foundation Fellowship. He died on May 6, 2006.