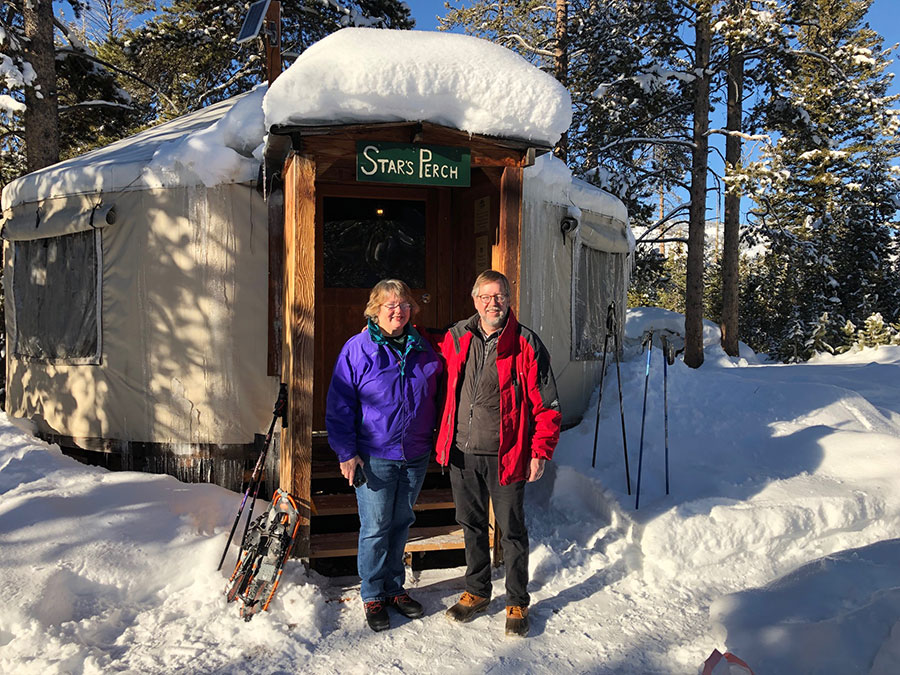 In honor of their time spent at USU, Jim and Jeri Spinner, pictured here at Star’s Perch Yurt, decided it was time to give back to the institution that gave so much to them. Working with the Advancement team, the Spinners were quickly able to see their vision of helping students become a reality.

Attending college is a time for new experiences: living away from home, meeting new people and, of course, being exposed to a wide variety of quality learning opportunities. For Utah State University alums Jim and Jeri Spinner, their time at USU also included finding love – love that has lasted throughout the couples’ successful ventures post-graduation. 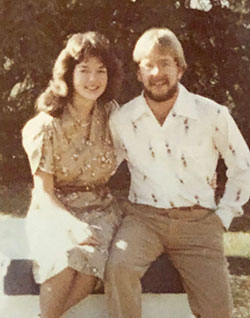 Jeri (left) and Jim on the Aggie A during their time as students at USU. 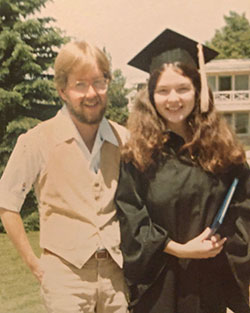 The Spinners, celebrating Jeri’s (right) graduation from the College of Business (Jon M. Huntsman School of Business) in 1981.

It was the late 1970s and Jim and Jeri were both living on campus and making the most of their undergraduate days. Both enjoyed the many social activities and events on campus and they often took advantage of the outdoor adventures in Logan Canyon and the surrounding valley. During fall quarter 1978, Jim and Jeri were signed up for an algebra class in the old Agricultural Sciences building. After noticing one another the entire quarter, Jeri said that Jim finally asked for her phone number after the final exam. The couple married about three years later and have been inseparable since.

“Thank goodness for general education classes and last-minute schedule changes,” Jeri said. “Otherwise we may not have met.”

After graduating from USU, Jim, in 1982, with a degree in recreation resources management from the College of Natural Resources (now the S.J. & Jessie E. Quinney College of Natural Resources, and Jeri, in 1981, with a bachelor’s in administrative systems from the College of Business (now the Jon M. Huntsman School of Business), the couple went on to graduate school. While Jim earned a law degree from the University of Idaho, Jeri pursued an MBA from the same institution. The couple decided to settle and make their home in Idaho, where Jim has served as a private practice attorney since 1985. Jeri went into higher education and taught business classes at Idaho State University for a number of years. She recently retired as department chair of the Business and Service Department in the College of Technology at ISU.

“Looking back, we were both successful in graduate school and later on in our careers, because of the academic rigor at USU,” said Jim.

After the recent passing of Jeri’s mother, Carol Weeks, the couple began thinking about legacies and what they value most. With fond memories of USU, the Spinners agreed that the university provided them an excellent foundation in all aspects of life. So, in honor of their time spent at USU, the couple decided it was time to give back to the institution that gave so much to them. Working with the Advancement team, the Spinners were quickly able to see their vision of giving become a reality. Deciding to generously support the respective colleges from where each one of them earned their degree, Jim and Jeri provided the funds for a new lab to support graduate students in the studies of recreation resource management, environment and society, and ecology, as well funds for an updated outdoor terrace on the fourth floor of the Huntsman Hall.

In addition, the Spinner Weeks Terrace, located in the Jon M. Huntsman School of Business, provides an overlook on the west side of Huntsman Hall that Jeri hopes can be enjoyed by both business and non-business students alike. Jeri’s affinity to the Huntsman School is four-fold as Jim, although a QCNR graduate, earned a minor in business, and the couple’s two children, Hannah ’10, graduated with a degree in accounting and Jesse ’12, earned two degrees, one in business and one in biochemistry. The couple beam when talking about their children, who were undergraduate research fellows at USU, and who also went on to further education. Hannah is a clinical pharmacist at the University of Utah and Jesse is a doctor who trained at Ohio State University and is specializing in radiology. He is currently completing a fellowship in Seattle, Washington 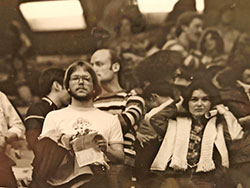 Jim (left) and Jeri attended many on-campus activities during their time on campus, including this Aggie Basketball game in the Dee Glen Smith Spectrum in 1979. USU student and Utah Statesman photographer Leon Merchant, a friend of Jim’s, took the photo. 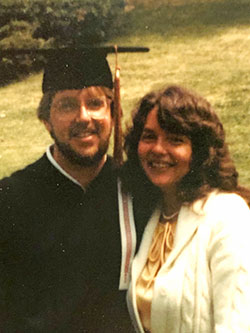 “If we sound like proud parents, we are,” said Jim. “They too got a good foundation at USU that allowed them both to go on and flourish in medical school.”

Named spaces are one way the university is able to acknowledge the generosity of donors and honor those whose service to or affiliation with USU enhances the university. The legacy the couple wants to leave at USU is meant to honor not only Jim and Jeri, but also their children, as well as Jeri’s dad Wendell L. Weeks, a USU alum who graduated in 1954, her grandfather, Lawrence G. Weeks, who also attended, and Jeri’s great-grandfather, Albert Beutler, who milled lumber for the first buildings on the USU campus.

Physical spaces on a university campus – buildings, classrooms, offices, labs and libraries – provide a place where creative ideas and fruitful academic experiences happen. Donors help the university as it evolves to meet the ever-changing and diverse needs of its students in an environment that promotes knowledge and creativity.

“It’s really about helping students get what they need,” said Jim. “We give because the next generation is the future. As a whole, they face a number of serious societal and environmental issues. The more educated and well-traveled the next generation is, including exposure to different people and cultures, the better prepared they will be to meet the challenges. USU is central to ensuring this happens.”

As USU looks to continue building a university of distinction, generous gifts provide an array of support for facility enhancement and expansions, athletics programs, community outreach and enrichment projects and innovative academic tools and resources that spur discoveries and economic development. Each of these contribute to a successful society and as the university continues to grow and expand, support from people like the Spinners, is shaping the future and ensuring continued excellence.