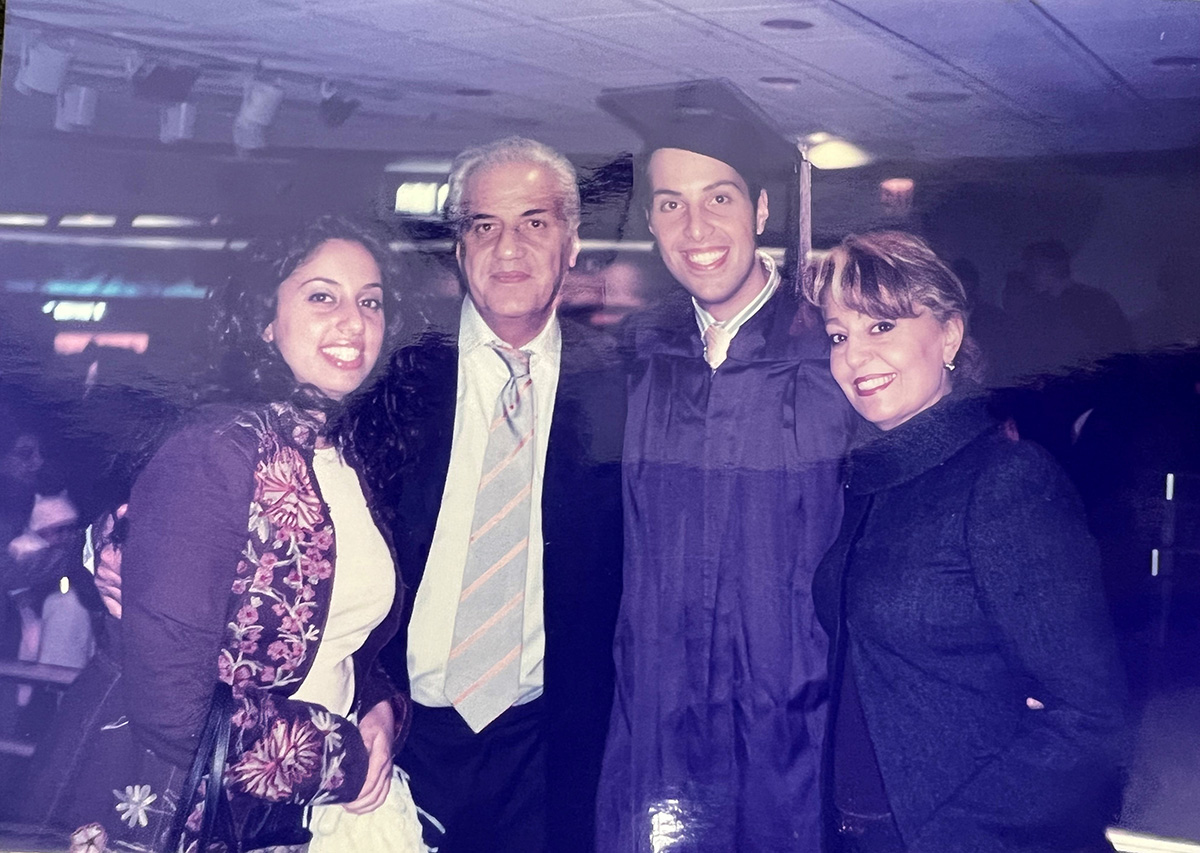 Paul Maroof with his wife, Nahid, and children.

The United States in the 1960s was a tumultuous political decade filled with the ongoing Vietnam War, Civil Rights protests and the assassinations of both John F. Kennedy and Martin Luther King. In March 1969, while the U.S. was in its earliest days of Richard M. Nixon’s presidency, a young man left his homeland of Iran for New York City. Joining the city known around the world for its vast number of immigrants, the young man planned to settle, go to school and live the American dream. However, his journey was far from over. Because for Paul Maroof, realizing his version of the American dream didn’t take hold until he traveled west to Utah State University.

While spending those first few months in New York City, Paul began taking classes at the community college, becoming the first in his family to attend. At the encouragement of a friend who was leaving New York to go to Utah State University, Paul decided to apply and hopefully join him. The acceptance letter a few months later cemented his decision and the duo packed up and headed west to Utah, a state vastly different in culture, politics and geography. But surprisingly to him, Paul began to feel right at home after settling on the Logan campus.

“It was an interesting culture shock when I moved to Utah,” Paul said. “But if I hadn’t come to USU, I would never have finished school. I lived on campus, focused on my classes and worked toward my goal of earning a degree.”

Logan was a small and welcoming college town and Paul joined an international student population of about 500 students, with nearly 200 from Iran. The town quickly became his home away from home. He decided to major in electrical engineering and graduated with a bachelor’s degree in 1974.

Originally planning to return to his native Iran after graduation, Paul’s life shifted again. His parents, foreseeing the coming of the Iranian revolution, immigrated to America in 1976. So, instead of returning to his homeland, Paul joined his family in New York to begin the next chapter of his life. Applying the analytical skills learned during his time at USU, Paul got into the jewelry business in 1978 with the founding of Royal Chain, a jewelry wholesale company with merchandise sold in more than 5,000 stores across the United States, Canada and the Caribbean Islands. Specializing in 10k, 14k, 18k gold and platinum jewelry, Royal Chain has experienced continuous growth under Paul’s leadership as he brought on two partners, as well as the addition of both his son and daughter to assist with running, developing and growing the business.

In 1979, Paul met the love of his life, Nahid. Also a first-generation student, Nahid left Iran after graduating with a degree in dentistry from the University of Tehran. She attended New York University (NYU), where she got her license to practice dentistry in the U.S. Nahid eventually became a professor at NYU’s dental school, a position she held for nearly 18 years.

The couple met through a friend and had two children, living the American dream in both their lives and careers, which Paul credits in large part to their education. In 2021, Paul created an Aggie Family Scholarship in the couple’s name to honor Nahid, who died of cancer in 2018. The Paul and Nahid Maroof Aggie Family Scholarship is intended for Aggie First Scholars, a USU program that recognizes and develops success for first-generation students, just like the Maroofs.

Growing up in Iran, Paul and his siblings had always been encouraged by their father to go to college. The support from his family was a huge factor in Paul’s success and he is proud to say that not only did he graduate with a degree, but so did his four brothers.

“My degree in electrical engineering has played a huge role in my life,” Paul said. “My understanding of how things work, logic and math has become a foundation here in my jewelry business. My education is constantly kicking in and I feel I wouldn’t have been as successful without it.”

Paul credits his USU education with opening his eyes, giving him a different way of looking at things and realizing his potential. By creating the scholarship, Paul is supporting students who are forging a new path, as he and Nahid once did. His hope is that anyone with the goal of attending college can turn it into reality.

“I hope this scholarship encourages and creates opportunities for first-generation students to realize their dreams,” Paul said. “Nearly 48 years later, I still cherish my time at USU. I hope any student who wants to go to college can get out of it as much as I did and learn amazing life lessons, while gaining an education that will take them to the next level.”