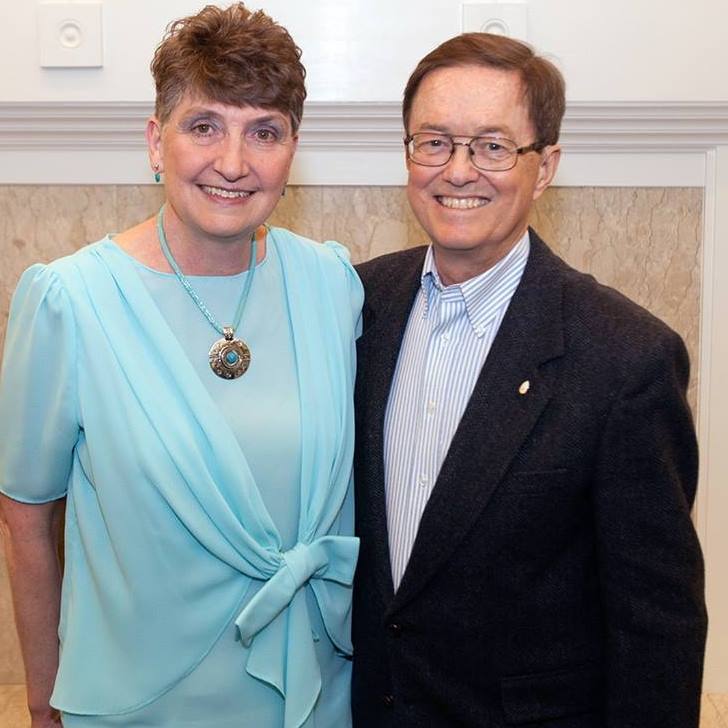 As a young newly married couple arriving in Logan, Utah in 1972, Bob and Kathy Bayn had carefully mapped out their plan – Bob would enter Utah State University’s well reputed graduate program in biology to study plants, Kathy would pursue her own career path in the classroom teaching high school math. Immediately after Bob earned his PhD, they would turn around and head back home to Michigan. Unexpectedly, their plan would take some significant career twists and turns for each of them. While it’s true that they never intended to remain in Logan, that is exactly what they did, and in time, without any regrets. The beautiful, rugged mountains of Logan which at first seemed so daunting and unfamiliar to this couple from the plains of the Midwest ultimately became a cherished and comforting backdrop to their lives. As their family grew, so did the Bayns’ deep and lasting connections to the university town and the university itself — connections as active members of the USU academic community, through alumni activities, and as generous and ongoing supporters of every college on campus and a wide range of USU programs and scholarships.

Bob Bayn – A Strong Campus Presence
Dedicated to exploring nature and conserving the environment, Bob Bayn fully immersed himself in USU, first as a master’s degree student in botany, and then by earning a PhD in plant ecology. While a graduate student, Bob served as a research technician in USU’s biology and range science departments. His first job after earning his degrees was as an ecologist for Bio-Resources, a private local environmental consulting firm. Bob worked for four years investigating land-based environmental issues with a focus on how, for example, oil spills, pipelines, and construction, impact terrestrial habitats. Bob quantified everything he found in nature. His years of collecting and analyzing biological data on plants gave him early exposure to and entry into the newly emerging field of computer science. Although he did not have a computer science degree, in 1986 Bob returned to USU to work in the department of academic user support. He helped bring advanced technology to USU by assisting students, faculty, researchers, and staff with their IT needs. For more than 33 years, Bob served as one of USU’s computer gurus. He retired as the university’s network security analyst in 2016, and sadly two years later lost his battle against polycystic kidney disease.

Kathy Bayn – Helping Students Succeed
During their first year in Logan, while Bob was acclimating himself to the university community and life in Logan, Kathy Bayn was facing career frustration. Her lifelong goal of teaching math, which was jump-started when she was a student teacher in Michigan, had to be put on hold when she discovered there were no teaching jobs in the Logan area. To earn an income, she became the secretary to the head of the Department of Bacteriology and Public Health (now the Department of Biology). After one-and-a-half years working in the department, Kathy heard about a substitute teaching position in a town outside of Logan, and in January 1974, Kathy excitedly returned to the classroom. Her excitement soon faded — the daily drive from Logan through the mountains to school was arduous, and her students were challenging. Kathy made every effort, but she eventually recognized that despite her teaching credentials, and her good intentions, this job was not what she expected. She gave her notice and closed the door on her classroom teaching career.

Kathy returned to USU — this time as executive secretary to the dean of the College of Engineering until their son Bill was born in 1977. After being home for a year with Bill, Kathy worked as a secretary in the Department of Environmental Engineering until 1982 when daughter Jenny was born. Kathy once again returned to USU in 1984 when she was offered the newly created position of academic advisor in the College of Engineering. One of only two academic advisors in the university when she started (there are now 100 advisors), Kathy was able to redirect what she learned as a teacher and apply it to her role of adviser. Her organizational skills and knack for coordinating services enabled Kathy to seamlessly advise the approximately 700 students each year who sought her help in everything from selecting classes, navigating the financial aid department, applying for internships, and post-graduation planning. For Kathy, the best part of her job was the relationships she formed with her advisees.

In 2009, Kathy was selected as an Outstanding Advising Certificate of Merit recipient from the National Academic Advising Association. When after 35 years in this role, she retired, Kathy remained deeply engaged in campus activities, productive in USU fundraising initiatives, and strongly connected to people in the university community. Today her involvement is as strong as ever, taking advantage of USU’s theater, arts and events. Kathy is also a member and past president of the USU Emeriti and Retired Employees Association.

Unmatched Generosity
With their combined total of 70 years working on campus, Bob and Kathy gave to USU fully and unconditionally. Early in their marriage, they discovered a shared belief in the value of philanthropy, and together they donated to a variety of organizations that interested them. Their highest priority was to give where they worked, and in Bob’s case, where he earned his graduate degrees. Their special legacy of giving began in 1984, when Kathy co-chaired, on behalf of the Professional Employees of USU, a task force that helped establish an annual student scholarship. It was proposed that this scholarship would be funded solely by staff payroll deductions. “If every professional USU employee would give just one dollar-a-month through a payroll deduction plan,” Kathy said reaching out to the professional staff, “then we would be able to give a very nice scholarship every year.” The committee’s efforts resulted in the creation of such a scholarship. It was also the beginning of the Bayns’ long history of giving to a variety of USU colleges and programs through payroll deduction. Over the years, Kathy and Bob increased the amount of their payroll deductions from $1 to $15 to $25 to $50+ per paycheck. To date, the Bayns’ aggregate total of payroll deduction gifts is nearly $100,000.  In addition to their support through payroll deductions, Bob and Kathy also created an endowed scholarship called the Jerry Herr and Kathy Bayn Scholarship Endowment in Civil Engineering. This scholarship was made in honor of Kathy’s father, Jerry Herr, an engineer.

“Maybe those who don’t give think that their little bit doesn’t matter, but it does, especially over time,” said Kathy, and who better to know that than the Bayns. “As our family grew, we had some discretionary funds,” said Kathy. “We didn’t want or need a boat or a trip, or anything like that — what we wanted was to help — that’s just how we thought and just what we did,” said Kathy.

As Kathy looks out of her kitchen window and takes in her full view of the mountains, she wonders what their lives would have been like if they had returned to Michigan many years ago. “I can’t imagine us living in the flat, humid Midwest,” she said.  How fortunate for USU that the Bayns followed the curve in the road and settled in Logan.