Earthstars belong to a group of fungi called Gasteromycetes, or "stomach fungi". Their fruiting bodies are a stomach-shaped sac filled with dry spores. They are related to puffballs. Young, closed earthstars are onion-shaped. Their peridium (skin) is made up of three layers. The layers allow the earthstar to do something no other fungus can do. Earthstars can move! When it rains, the outer two layers of the peridium split and uncurl, forming a "star" with 4 to 12 rays. The inner layer of the peridium remains a closed sac.

The rays spread with enough force to push aside leaves, raising the spore-filled sac above surrounding debris. Sometimes the rays even lift the earthstar high enough to break the connection to the parent mycelium. The rays close when they dry, and the sac lowers. Some sacs release their spores when the tender inside peridium wears away. Other sacs toughen and form an opening at the top. When a raindrop strikes these sacs, it pushes in the tough wall, puffing spores out of the opening. After the spores are dispersed the sac breaks down, leaving only fragments attached to the rays. In these older specimens, the star-like rays remain open. Earthstars are found from early June to mid-September. 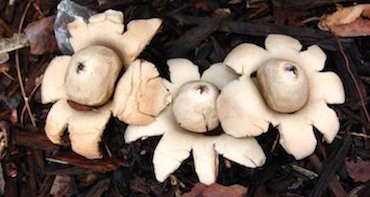 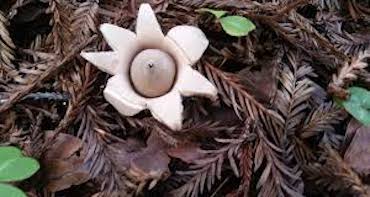 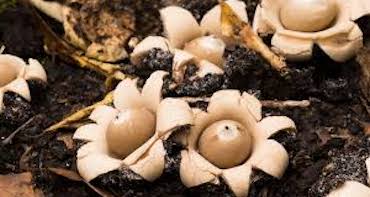