The name fairy ring comes from an old folk-tale. People once believed that mushrooms growing in a circle followed the path made by fairies dancing in a ring. Fairy rings are found in open grassy places and in forests. In grass, the best known fairy ring fungus has the scientific name Marasmius oreades. The body of this fungus, its mycelium, is underground. It grows outward in a circle. As it grows, the mycelium uses up all of the nutrients in the soil, starving the grass. This is the reason a fairy ring has dead grass over the growing edge of the mycelium. Umbrella-shaped fruiting bodies, called mushrooms, spring up from just behind the outer edge of the mycelium.

Large rings are created when the older mycelium in the center finally exhausts the soil nutrients and dies. On the death of the central mycelium, the nutrients are returned to the soil and grass can grow again. The living edge of the mycelium continues to grow outward. As it grows, it secretes chemicals into the ground ahead. These chemicals break down the organic matter, releasing nutrients so that the mycelium will have food when it reaches this area. For a brief time, the grass at the outer edge of the ring also benefits. The extra nutrients make the grass darker green, taller, and thicker than the rest of the lawn or pasture. This lush grass dies when the mycelium grows under it and steals the nutrients. Fairy rings made by fungi like Marasmius oreades are called "free" rings.

They will continue to grow outward until a barrier is reached. Sometimes the barrier is another fairy ring! Rings can grow into each other's territory and die as each reaches the other's "dead zone." If there are no barriers, free rings can grow outward at up to 8 inches (20 cm) per year. They can reach a diameter of over 30 feet (10 m). One ring formed in France by the fungus Clitocybe geotropa is almost a half mile (600 m) in diameter. This ring is thought to be 700 years old. Mycorrhizal fungi, which live in symbiotic partnership with trees, also form fairy rings. Their rings are called "tethered" rings. A tether is like a leash. The fungus and its mycorrhizal partner tree need each other to survive. The mycelium of these fungi always remains joined to the tree's roots. Roots are the "tether" that keeps the fairy rings of mycorrhizal fungi from growing too far from their tree. 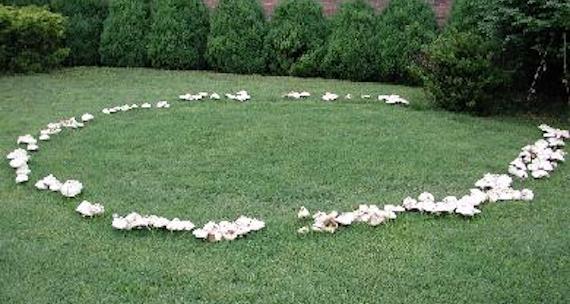 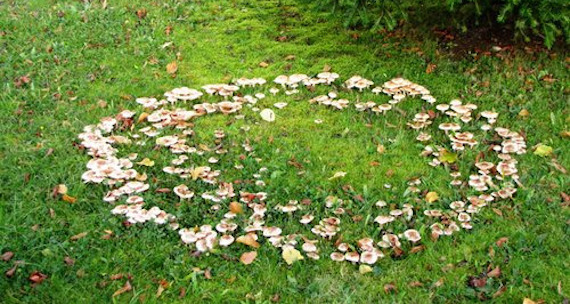