Giant puffballs are found in the central and eastern USA and Canada. During late Summer and Fall, look for them in meadows, under small stands of trees, and around forest openings. Puffballs are round or pear-shaped fruiting bodies that contain spores. They sit directly on the ground or on rotten wood. They range from golf ball size to as large as a watermelon.

A big specimen of the giant puffball (Calvatia gigantea) can be almost two feet long and contain 7,000,000,000,000 (7 trillion) spores. For comparison, there are about 31.6 million seconds in a year. If you held your breath for 7 trillion seconds, you’d be breathless for 221, 817 years! The giant puffball cracks open to allow the wind to carry away its spores. Other puffballs have a small opening at the top. The wind may suck spores out of these openings like smoke drawn from a chimney. The spores can also be “puffed” out of the opening when the fruiting body is hit by raindrops.

Giant puffball mushrooms are edible. Some say they have no real taste of their own and just absorb the flavors around them like tofu. Others have described their taste as rich, earthy, and nutty. If you're lucky enough to live in an area where they're sold, you can pick one up at the store. The rest of us have to find them in the wild.

There are two main concerns when harvesting a giant puffball: First, you need to correctly identify the mushroom; and second, you need to pick it at the right age. To know if it is at the right age, cut it open. It should have thick, hard, white flesh inside. Do not eat anything with a brown, black, purple, or yellow interior. Eat them soon after harvesting, puffballs do not keep well. The most popular way to eat them is to fry them in oil with batter.

Giant puffball mushrooms have possible medicinal uses as well. Remember those trillions of spores they produce? The spores are incredibly tiny. Each spore is 3.5 to 5.5 microns (0.00014 to 0.00019 inches) in diameter. They are bone dry, making a mature giant puffball a sack of fine powder. The Lakota tribe of Native Americans used this clean dry material in their medicine. They would pack large wounds with puffball spores to slow bleeding and help blood clot. The dried spores can slow bleeding if they're used as a coagulant. They were reportedly used to treat bleeding and prevent infection.

The use of Calvatia gigantea in folk medicine led researchers to to investigate it further. In the 1960's they isolated the substance calvacin, which was shown to inhibit sarcoma in lab mice. Calvacin is now cited as one of the first substances with antitumor activity isolated from a mushroom. 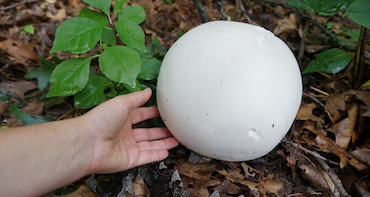 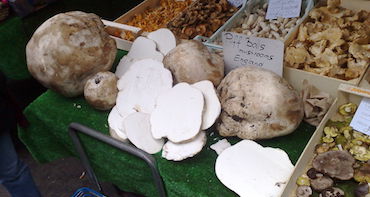 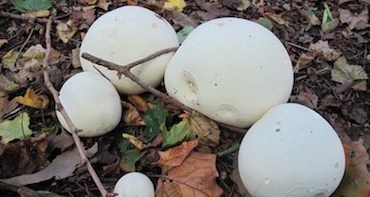