Morels are the fruiting body of a fungus that lives in the soil. When the soil temperature and moisture conditions are right the fungus produces morels, containing the spores of the fungus. The wind carries the spores to new habitats, where they germinate and produce a new individual of the morel fungus. The pitted, spongy cap on the white stem contains the spores. Some caps are black, gray or even white depending on the species of morel fungus.

The ascus, a special cell containing the spores, is the common feature of all ascomycetes. Every identified organism in the world has one scientific name, in Latin, but may have many common names. Morchella esculenta is known as the Common Morel. Another common name for this morel is the Sponge Mushroom. Gyromitra esculenta is commonly known as the Beefsteak Morel but is poisonous to many people. It is also known as the Brain Mushroom. Some books on fungi use only their scientific names, to avoid the confusion of having several names for one species, or the same name for two different species.

Where do Morels Grow?

Morels are found in many different kinds of places. Our records at the University of Michigan show that they are found in cedar and hemlock swamps, in mixed hardwood forests, under aspens, near dead American elms, and in apple orchards. Morels are often produced in great abundance after forest fires and even in bark mulch on flower beds. The common feature of all these records seems to be wet soil that is high in organic matter and shaded by trees, especially hardwoods.

In Michigan morels start to appear in late April and can be found until mid- June, but local conditions can alter this timing. Sunny spots on south-facing banks will produce morels sooner. Morels will appear as early as late February in the southern U.S. The higher the elevation, or the further north you travel, the later the crop.

There have been numerous attempts to grow morels indoors because of their value and the challenge of finding them. Neogen, a Michigan biotechnology company, patented the first successful commercial cultivation method in 1981. The process they developed fools the fungus into producing morels by starving the sclerotium (knot of filaments produced when growth conditions are bad) and then flushing it with water.

Every spring the woods are filled with people searching for edible morels. Morels are wonderfully delicious and fairly easy to identify. Their appearance in the spring occurs at a time when people are eager to resume outdoor activity. Fresh morels are offered for retail purchase at $20.00 to $24.00 a pound ($40 to $50 U.S. dollars per kilo.) No wonder mushroom hunters take to the woods to gather this delicacy for free.

Favorite spots for collecting morels are a closely guarded secret, and wars have even broken out among commercial collectors in the Pacific Northwest! Collectors are so passionate that festivals are held in northern Michigan with prizes awarded for the largest morel, the most morels, the best recipe, etc. The Boyne City Morel Festival, in the third week in May, is the biggest in Michigan. In 1994, 17,000 collectors attended the festival.

Fungi contain many chemical compounds. The fungi on sale at the supermarket are species that are not only non-poisonous, but cause no irritating or allergic reaction for most people. The reaction from eating wild mushrooms is less predictable.

Be informed and use the following precautions if you decide to go morel hunting: 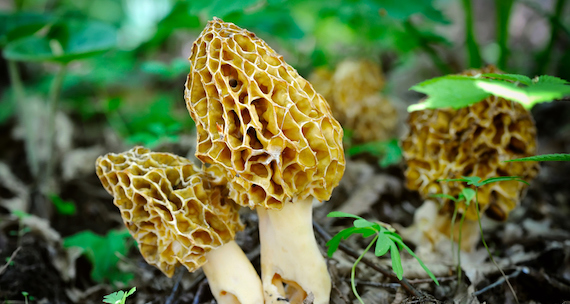 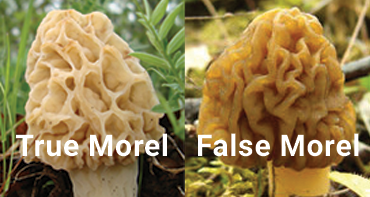 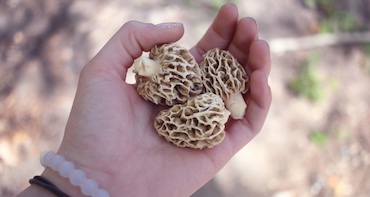