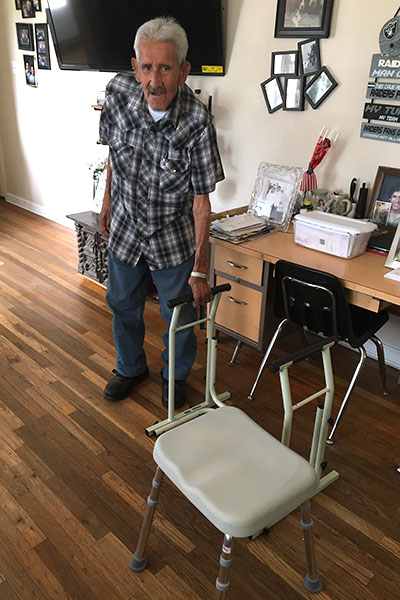 Ray, a client in southeast Utah,
poses with some low-tech assistive technology.

UATP’s demonstration and loan program has helped people in southeastern Utah receive the equipment they need, helping them remain independent.

Paul Goodrich, a doctor of physical therapy in Monticello, has been partnering with UATP to help his clients. “In general there’s pretty limited access to care, especially on the Navajo reservation,” he said. Clients often hesitate to spend their money on a piece of equipment they will only use for a month after surgery—or they simply can’t afford it.

“I had a lady, she lives on dirt roads out of town, and she didn’t have anybody to help care for her. She’d walk with this old upright walker. It was really awkward wit it was the only thing she had.” The woman had had a stroke years before, and an unrelated problem brought her to the hospital this year. She had been very limited in her mobility until then. “She didn’t realize she could do it differently,” he said.

The hospitalization brought her to Goodrich’s attention, and he turned to Cameron Cressall at UATP in the Uintah Basin for an equipment loan. UATP allows people to try equipment before they purchase it, to make sure it really will work for them.

“Cameron dug through storage and found this knee brace. It turned out to fit her perfectly.” They also found a better walker and shower seat, and her independence increased dramatically.

Other clients have also benefitted from UATP loans, Goodrich said. “I told Cameron maybe I could count on one piece of equipment a month, but instead we’ve done one a week,” he said. Other therapistsw have started working with UATP as well.

Caption: Ray, a client in southeast Utah, poses with some low-tech assistive technology.