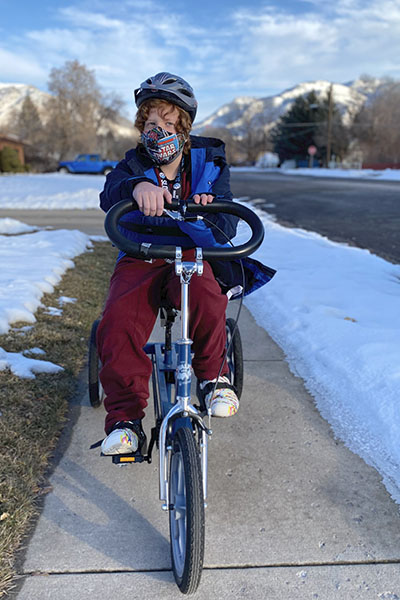 Garrett Carter-Olson on the therapeutic trike that
helped him win a science fair.

A pandemic isn’t fun. Neither is surgery. But when Gabriel Carter Olson combined those two obstacles with a therapeutic trike and a science project, he ended up winning an online science fair and speeding his own recovery.

The trike came from the Utah Assistive Technology Program, at a time when Gabriel needed a way to fully extend his knees but not put pressure on them. He has cerebral palsy, and a year ago his hamstrings were so tight, he needed surgery to lengthen them. After that, the bike helped him improve his mobility.

The family had looked into buying a therapeutic trike, but couldn’t afford them. “They can cost thousands of dollars, and nobody can afford that,” said Gabriel.

“UATP was the only option,” said Gabriel's mom, Candi. So the family purchased a prototype from UATP in Logan, for the cost of materials. The Logan team is refining its design before they make the plans for building a trike available to everyone—for free.

His family used the trike for a virtual 5K event. It also helped his education. Due to the pandemic, Gabriel is schooling at home, so the 5K gave him material for a science project. “This website does learning games to help you better understand your topics,” he said. His family participated in the 5K with him as Team Sloth. “I like sloths. They always have a smile on their face, every time you take a photo of them,” he said.

Gabriel wanted to know whether he would finish his 5K faster if his path was level, or if he used the slow-down, speed-up effect of hills. He gathered data and created a spreadsheet, concluding he would make the best time on a level path. Then he entered his results in an online science fair with Legends of Learning. He was one of two grand prize winners.

His prize money will buy a canoe once the weather warms up. He wants to take the family dog, Bear, out on the water with him. Another perk was an hour-long meeting with scientists from Medifast, a sponsoring company.

The project also helped UATP, as Logan Coordinator Dan O’Crowley and volunteer Mike Stokes teamed up with physical therapist Shaun Dahle to tweak the design of the metal therapeutic trike Gabriel used. (Dahle is not employed by UATP.)

“Gabriel is a client who has used the trike a lot,” said O’Crowley. “He found some weak points in it.” The Logan team used Gabriel’s input to improve the design.

Instructions for building a smaller, therapeutic trike made from furniture-grade PVC are already available on the Instructables website.