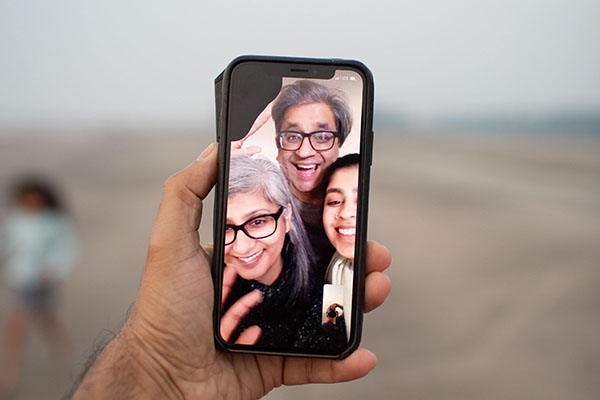 Video communication apps are the stuff of pandemic survival. As weather grows colder and outdoor social gatherings become harder to do, they’ll become even more important.

At UATP we’ve already introduced some video chat apps, but the subject is worth another look because capabilities are always changing, and some companies have really stepped up in the face of quarantines. Here are some October 2020 observations on apps, the advantages they offer, and ways to use them. Bear in mind, they’re from the perspective of a user, not a tech guru.

My observations are all from testing apps on my iPad. There will be some variation if you use a different device.

Make sure you are starting with a charged device, or a device that is plugged in. Video services use a lot of power. You’ll also have a better, less glitch-y experience if you make sure your device and apps are updated.

It’s also good to find a strong signal. My house has wifi dead spots. I’ve learned what places to avoid while on a video chat.

Good lighting is also a plus (but only if you want people to see you).

If you don’t want to be seen, you can turn the camera off. I’ve done this for practical reasons, too; sometimes I get better audio from a video communication app than I do from a cell phone, especially if I turn off the video. All the signal goes to the sound, and that can be really helpful if you’re in a spot where the wifi is better than the cell service.

Finally, if you’re using captions in an app, you might want to consider casting the conversation on your TV, or plugging into the TV via an HDMI cable (which may require an adapter, and they can be expensive). Alternatively, you can wear reading glasses. That print can be pretty small.

I’ll give a brief overview to a couple Google video chat/conference apps here, but Zapier offers a deeper dive.

Google Meet is a favorite with a friend who works with Utah’s Services for the Deaf and Hard of Hearing, mostly because of the caption quality. This service has been around for a while, but the free version has only been available for a few months.

I tried it and I was impressed. Some things I noticed right away: the icons for mic (mute), video camera and call hang-up never went away. I frequently fumble for the mute button, and once or twice I’ve forgotton whether I’m muted or not, so I appreciated that. It also allows me to share the screen.

The captions were good. There wasn’t much of a lag and they were for the most part accurate. The subtitles showed captions for both me and my conversation partner

I didn’t test its automatic censoring of swear words, but I’m told that works, too.

Limits to the free version: If the call is initiated by someone who is not a premium Google customer, only people with Google accounts can join—but it will support 100 such users. (If you have a gmail address, even a free one, you have a Google account.)

Hangouts have also been around for a while—long enough that I wasn’t sure if the service was still a thing. It is. It seems similar to Facebook Messenger, with chat and photo sharing built in. Its limit is 25 participants, and they will need to have Google accounts (again, if you have a gmail, you have an account). But if you have a free Google account, the Hangouts app is also free.

It does not include captioning. Its mic, video and hang up button icons all disappear and reappear if you tap on the screen.

This service is free to Microsoft users. Captioning is included, and up to 50 people can be on a call. The captions showed what other people were saying, but my words did not appear on the screen.

A new feature: Skype lets you blur out your background. Other options include shutting off incoming video, recording the conversation and sharing the screen. You can also review the subtitles.

The mic and video buttons do disappear, and they reappear when you tap on the screen. And as with the other services, it’s free but those who use it need to have an account. If you have a Microsoft account, a Hotmail or Outlook email, paid or free, you qualify.

This staple of the work conference meeting is also available in a free version. While you have to create a free account to initiate a meeting, you can add people who do not have a zoom account. You can talk to 100 people for 40 minutes on a free plan.

Zoom does allow a lot of flexibility and free features. People without a Zoom account can still participate

Limitations: Captions are not included with Zoom—at least, not without a third-party app. The mic and video buttons disappear and reappear when the screen is tapped. And since it is a business app at heart, its design doesn’t feel as intuitive as some of the apps designed for friends-and-family communication.

Like so many other services, Facebook Messenger requires all its users to have a Facebook account (free, of course). Its video and audio quality are solid. It’s also easy; just about everyone in my circle was already on it, so it’s pretty much our default communication app.

Another weird little perk for FB Messenger: in a one-on-one conversation, where my family member appears large and I am in a smaller window, I can move my own window over if it’s blocking my view of my family member.

The mic mute button disappears on FB messenger after a bit, so you have to tap to make it come back up. There is no captioning. And because the app gives Facebook access to your mic, you may discover products you’ve discussed around your phone are being advertised in your Facebook feed. Again, that’s a subjective observation, but it has happened to me more than once.

So that’s a quick review of some apps. Do you have a favorite? Message us on social media!