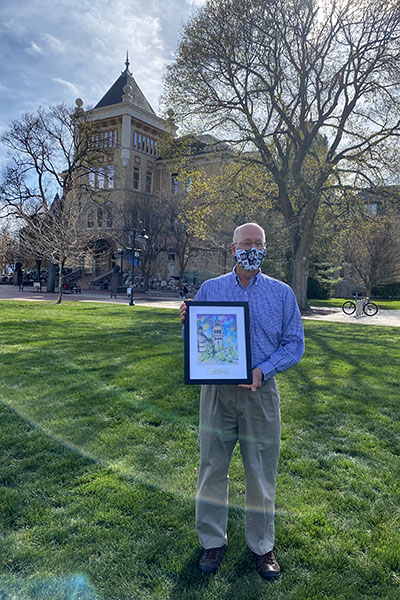 Mike Stokes with his award

Throughout his years of volunteering with UATP within the Center for Persons with Disabilities, he has shown his commitment to involving students in designing and building devices that improve lives of people with disabilities--and people in general. “He is an excellent example of a community-committed partner,” said Matthew Wappett, CPD executive director, as he presented the award.

Stokes has created custom-made solutions for people who could not find or afford the devices that could make them independent. He has also developed a child-sized therapeutic trike out of furniture grade PVC pipe, in conjunction with a local physical therapist. Not only has this device helped local families who could not have afforded the equipment otherwise, but UATP has put the design out on the Instructables website and created an instruction video that has been viewed more than 4000 times.

In addition, Stokes has guided engineering students at USU as they design projects to benefit people with disabilities. In 2019 they produced an affordable, adult-sized metal therapeutic trike.

In 2020 Stokes spearheaded an effort to create PPE for health care workers and emergency workers at a time when it was hard to find, bringing in UATP, the College of Engineering and community partners. He remixed a design for a headband that would accommodate wearers with glasses. The face shield portion was made from old, repurposed overhead projector sheets. Many educators donated these for the cause. Because the entire face shield could be sanitized, it was considered medical grade.

The face shields produced in this effort, made with 3D printers, laser cutters and CNC cutters, ultimately went to rural health care providers and emergency workers. UATP received and filled requests from as far away as the Navajo Nation, with the help of individuals and businesses in Cache and Box Elder counties.

Congratulations, Mike, and thanks for all your good work!