Cedar City is one of 25 cities participating in the Utah Wellbeing Project. This project is designed to assess the wellbeing and local perspectives of city residents and to provide information to city leaders to inform their general planning process.

Eighteen cities participated in an online survey effort in February and March 2020. The Cedar City mayor’s office and economic development office advertised the survey via social media and a newsletter. All city residents age 18 and over were encouraged to take the online Qualtrics survey, available from January 30, 2020 to March 8, 2020.

A total of 262 completed surveys were recorded during this effort. This report contains descriptive information based on Cedar City resident responses and comparisons with other cities from this most recent survey effort.

Public intercept surveys with iPads were also conducted in May 2019. A report based on those findings is available at https://usu.edu/utah-wellbeing-project/.

Table 1 details the demographic characteristics of the respondents and allows for comparison with U.S. Census information from the 2014-2018 American Community Survey. As the table shows, females and those age 60 and older were overrepresented in the survey sample. The survey underrepresents those without a college degree, those with incomes under $50,000 and those who are nonwhite or Latino. There is no census comparison for religion. These characteristics should be taken into consideration when interpreting the findings from the survey, as survey respondents are not fully representative of Cedar City residents.

According to national and international entities tracking wellbeing, a number of common domains make up wellbeing. In this survey, respondents rated ten domains on a 5-point scale from poor to excellent, and indicated their importance to their overall personal wellbeing on a 5-point scale from not at all important to very important. Based on percentage with a good or excellent rating, the top three highest rated wellbeing domains for respondents were local environmental quality, connection with nature, and safety and security. The top three most important wellbeing domains were safety and security, living standards, and physical and mental health.

The demographic variables for age, gender college degree, religion, income, and zip code were significantly related to various wellbeing perspectives among Cedar City respondents. These relationships are shown in Table 2 below and are based on a multivariate generalized linear model using the categories from Table 1, excluding children in household and employment. Race/ethnicity was not found to play a significant role, but this could be due to sample size.

The graph below illustrates the relationship between the average rating and the average importance of wellbeing domains for survey respondents from Cedar City. Mental Health and Physical Health fall into the red quadrant, indicating that they were of higher than average importance but rated lower than average. It is important to note that all domains have an average rating above 3.0 (moderate) and the importance score for all domains is higher than 3.0 (moderately important). 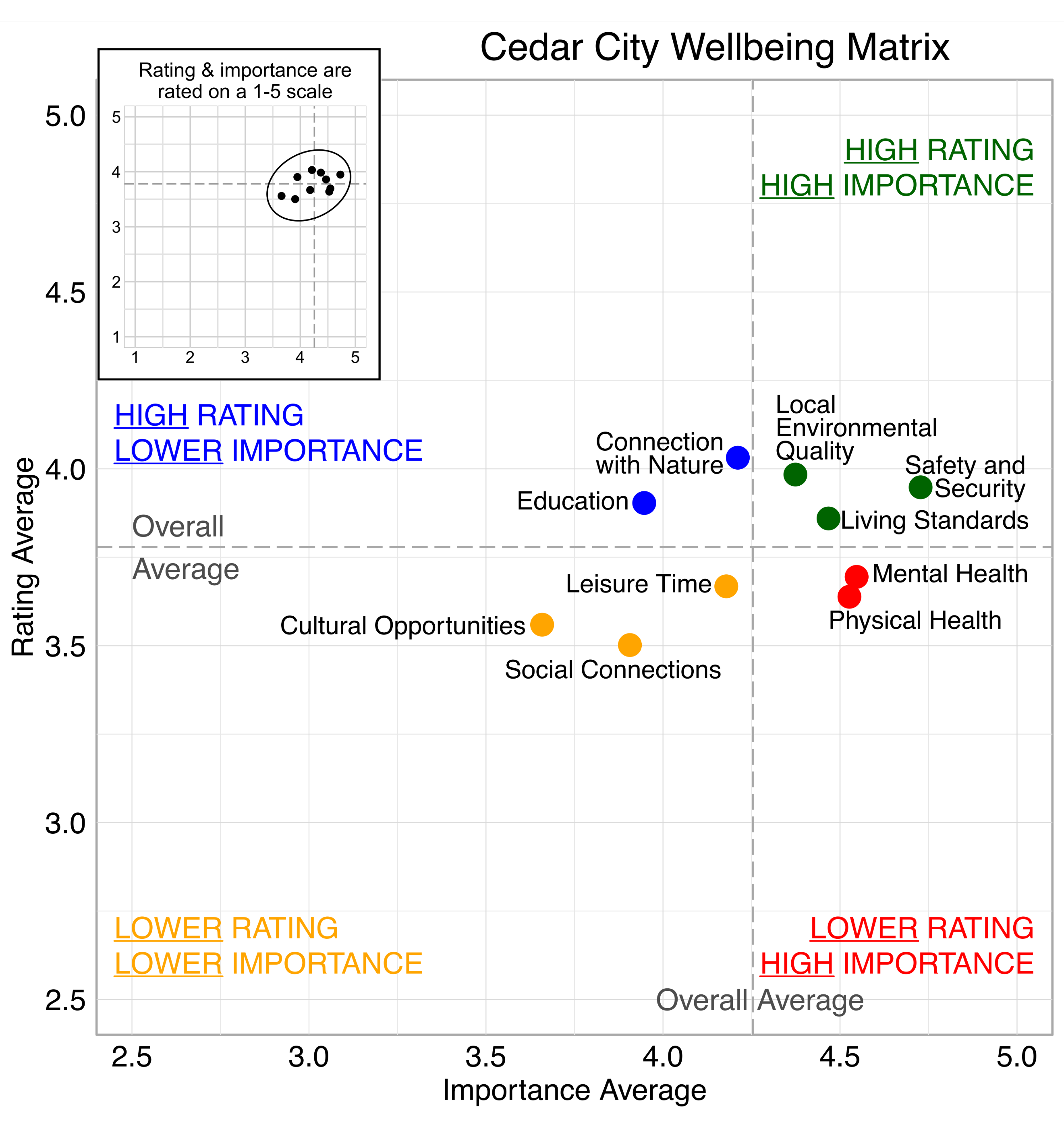 In terms of demographic characteristics, age, religion, and income played significant roles in responses to community questions as shown in Table 3. These findings are based on a multivariate generalized linear model. Additionally, there was a significant, positive relationship between individuals’ community connectedness and their overall personal wellbeing.

Perspectives on Population Growth and Economic Development in Cedar City

Survey respondents were split on their thoughts about population growth in Cedar City, with 46% saying it’s too fast and 43% saying it's just right. Regarding pace of economic development in Cedar City, 44% said it is too slow and 39% said it is just right. Compared to other cities surveyed in early 2020, Cedar City had a relatively small percentage of respondents indicate that population growth is too fast and a relatively small percentage indicate that economic development is too slow.

Risks and Assets for Wellbeing in Cedar City

Survey respondents indicated the degree to which a number of local issues were a major or minor risk or asset to wellbeing in Cedar City (see Table 4).

Respondents also wrote in other assets and risks as shown in Table 5. It is clear that some people not only listed current assets, but also those they wish Cedar City had.

Table 5
Other Assets and Risks Mentioned by Cedar City Respondents

Respondents were given the opportunity to provide comments at the end of the survey. Comments were made by 99 Cedar City respondents (38% of those that completed the survey). Cedar City residents are concerned about a wide variety of issues. Many people expressed frustration with the lack of high-paying jobs in the area and the high cost of living relative to wages. Additionally, some Cedar City resident shared the sentiment that Cedar City is growing faster than existing infrastructure can keep up with. Others feel that they are unable to find community and connection due to the social climate in the city. Other concerns mentioned in comments include issues relating to traffic, healthcare, spending, and cultural opportunities. However, many people appreciate the outdoor recreation offered and love living in Cedar City. 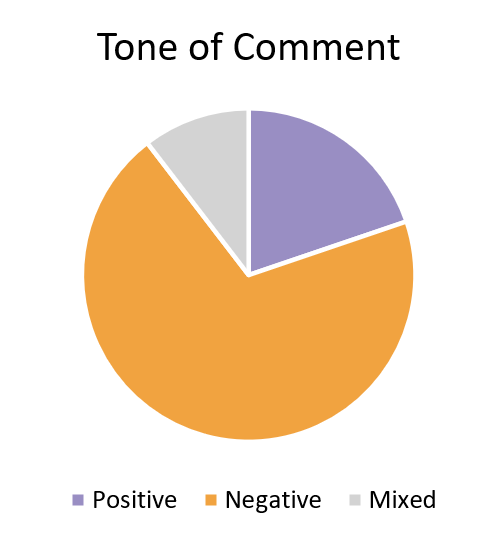 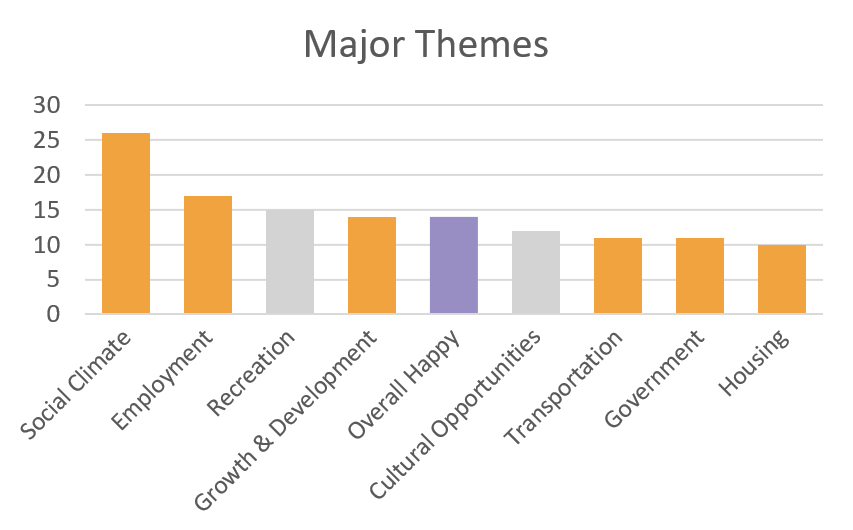